When Dr. Per Henningsgaard was hired as the director of Portland State’s master’s in book publishing program, he was told to begin a list of class offerings specifically for undergraduate students. 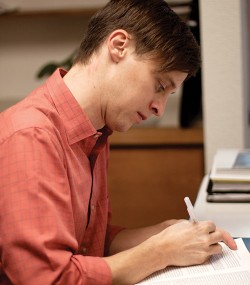 Per Henningsgaard, director of PSU’s master’s in publishing program, is teaching a new undergraduate course. Photo by Miles Sanguinetti.

When Dr. Per Henningsgaard was hired as the director of Portland State’s master’s in book publishing program, he was told to begin a list of class offerings specifically for undergraduate students.

Henningsgaard got right on it, and is now teaching “The Creative Business of Book Publishing” as a four-credit class offered under both ENG 399 and WR 399.

Henningsgaard said that, as of now, it’s mainly filled with English majors and writing minors, but he believes that as the class is offered more frequently there will be a greater variety of disciplines represented.

Many students want to work with books in some way but just aren’t sure what direction to take, he said. This class—and similar ones to follow—is what Henningsgaard sees as a way to give students a peek into something they haven’t been exposed to before.

“It also really widens their understanding of what they are studying in other classes,” Henningsgaard said. “All of our classes in college are based on studying text of some sort, and almost all of those texts go through publishing of some sort. To understand the process gives you a new understanding of the text that you’re studying, and students can take that knowledge into all their other classes as well.”

Meant as an introduction to book publishing, the course is organized according to a sequence of processes that most books move through on their way to being published. It covers the editorial process, the design and production process, and marketing and sales.

The course will be a combination of lecture, discussion and hands-on work. Students will work as small groups both in the classroom and the computer lab. Groups will work on the design of a book, or on editing a book.