With a doctoral degree from the University of Ottawa in Ontario, Canada, and two years of postdoctoral studies at Harvard University, David Stuart, Portland State’s new chemistry professor, brings with him great opportunity for research.

With a doctoral degree from the University of Ottawa in Ontario, Canada, and two years of postdoctoral studies at Harvard University, David Stuart, Portland State’s new chemistry professor, brings with him great opportunity for research. 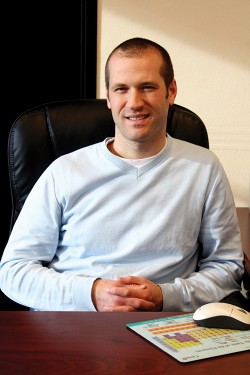 Stuart is currently teaching the mixed undergraduate/graduate course “Organometallic Chemistry.” He is also working on a research group that students will start participating in this December.

Stuart’s goal is to share his passion for catalysis with his students, and to help them understand what it can do for them and for the work.

His research group will be developing reactions that can be applied to the pharmaceutical industry. He wants to make new reactions that are more efficient and more cost-effective, and he hopes, essentially, to reduce the time and energy needed to develop medical drugs.

When Stuart made the decision to enter the world of academia, he applied to a broad range of schools. When he got an interview at PSU, the Victoria, British Columbia native felt that coming back to the West Coast would be a good fit.

“The department here is fantastic, and the city really appealed to me as well,” Stuart said.

Outside of academics, Stuart spends a lot of time with his wife and son. Though he used to play hockey, he said that he doesn’t have a lot of time now and just focuses on staying active and being outdoors.

He suggests that students take classes they are passionate about. “If you’re not passionate about it, then it’s going to be really difficult to get excited about going to class,” Stuart said.

“Make sure you love what you’re doing.”

letter to the editor