Jenny Liu, originally from Taiwan, isn’t new to the Portland State community, but she’s certainly new to the Nohad A. Toulan School of Urban Studies and Planning.Fluent in Chinese and English,

Jenny Liu, originally from Taiwan, isn’t new to the Portland State community, but she’s certainly new to the Nohad A. Toulan School of Urban Studies and Planning.Fluent in Chinese and English, 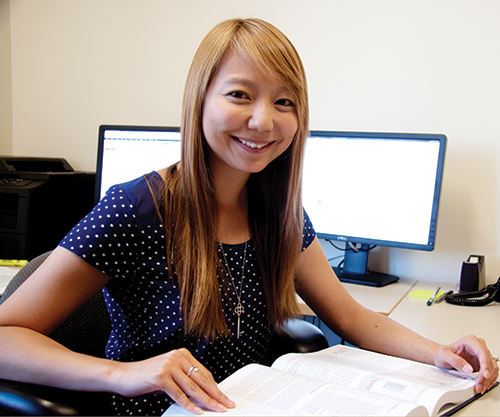 Her new job with the school, as an economist, is to support the types of things that planners do: figuring out land use and planning issues.

For both undergraduate and graduate school, Liu went to the University of California, Berkeley, where she focused on development economics, environment economics and resource economics.

Liu is also a part of the Northwest Economic Research Center, a new PSU center focusing on applied economics.

“It’s more things like evaluating public policy and trying to figure out if you have a different kind of policy or different types of tax rebates for different industries and how that’s going to affect the Oregonians,” Liu said.

She believes that economics is a two-sided topic; people either love it or they hate it.

“I’m in the ‘I love economics’ group, but I totally understand people that don’t like it,” Liu said. “For me, it always clicked in my head; and when I first learned it, I took a class in high school, and it was so amazing how it explained so much about the world.”

With that understanding, Liu believes that if she could give any advice to PSU students, it would be to take at least one economics class. She said it gives a solid explanation about how the world acts and reacts to things—not only individuals, but also firms.

Outside of economics, Liu enjoys the outdoors. Since moving to Portland from Berkeley in 2010, Liu has been slowly making her way through the 60 Hikes Within 60 Miles: Portland guidebook.
She has also traveled around the world, to more than 20 countries in Europe, South America, Asia and Africa.

“Traveling really gives you a good perspective on what the world is like. It’s not like you’re always in the developed countries and urban cities,” Liu said. “Going to all these other not-as-developed cities around the world gives you an idea of the different stages these cities are in and makes you appreciate what you have a lot more.”