Concerning PSU’s stance on the Occupy Portland protest, Rimai said that the university will attempt to strike a balance between supporting people’s first amendment rights to free speech while still maintaining a safe campus environment for students.

Carrie Medina, social media liaison for Occupy Portland, said on Tuesday that the park blocks are just one of several places being considered to house the Occupy movement. Washington High School, a privately owned warehouse and the floors above the Lotus Cafe have all been identified as possible bases for Occupy Portland.

Medina said that the park blocks are an ideal location for protesters because of their proximity to the center of downtown and because it would allow the movement to further involve PSU students in the protest.

According to Medina, the protesters have also considered the possibility of not camping in the park blocks but setting up information stations on campus in an effort to promote engagement among students.

A final decision about protesters collectively occupying a specific space has yet to be made.

If the Occupy Portland protest does move to the park blocks, the Portland Police Bureau, in conjunction with the Campus Public Safety Office, will monitor the situation.

When word of the Occupy movement’s possible migration to the park blocks first reached university officials via Portland Police on Sunday, Campus Public Safety Office did temporarily close the library and other campus buildings for fear that the cold weather would drive protesters to seek relief inside campus structures, which are not equipped to handle such a situation.

The Office of Enrollment Management and Student Affairs has circulated a letter urging students who may be participating in the Occupy movement to use caution, employ peaceful protest tactics, comply with all legal regulations and listen to police directives.

“We will be aware of what is going on and monitor (the situation) to ensure that our campus remains open and safe,” said Jacqueline Balzer, vice president for enrollment management and student affairs.

While the Occupy movement seems to lack a clear organizational structure with which to communicate, Rimai said that PSU has reached out to Occupy Portland members about the need for students to be able to have unfettered access to their education, and that occupiers were responsive to that need.

Christopher Broderick, associate vice president of communications and marketing at PSU, doubts that any serious incidents will arise if the movement does come to campus. “We aren’t expecting anything other than what we’ve already experienced, which is a peaceful protest,” Broderick said.

University officials are most concerned with maintaining the safety of PSU students and ensuring uninterrupted access to classes, but they also respect and support their students’ right to protest.

“There’s nothing wrong with people putting out what they think are the right answers,” Rimai said. 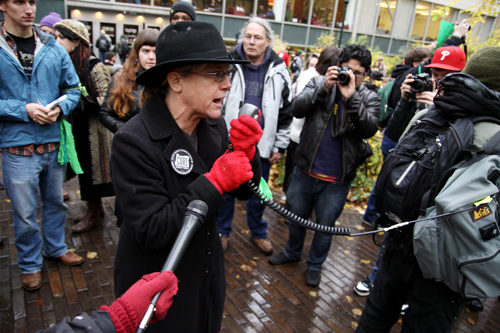