“You have breast cancer.”

These are four of the scariest words a woman can hear—and in the U.S., one in eight women will hear them in her lifetime.

How the rest of that conversation goes is largely up to the doctor. Women are often bombarded with treatment options and life-altering decisions within minutes of discovering they have cancer.

“You have breast cancer.”

These are four of the scariest words a woman can hear—and in the U.S., one in eight women will hear them in her lifetime.

How the rest of that conversation goes is largely up to the doctor. Women are often bombarded with treatment options and life-altering decisions within minutes of discovering they have cancer. 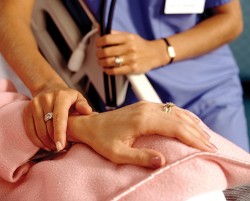 Some doctors seek to educate and encourage the patient; others simply state facts. Either way, that first visit can leave any woman feeling scared and a little hopeless.

Patient-centered care is the idea that doctors can communicate with their patients in a way that makes them feel empowered and involved in decisions regarding their illness, which research has shown can improve a patient’s outcome.

In a study funded by the National Cancer Institute, Robinson examined the interactions between 147 women newly diagnosed with breast cancer and their surgeons during their first meeting.

From this, Robinson was able to measure how the communication between patient and doctor affected the patient’s level of hopelessness about their disease, both before and after the primary visit.

“Hopelessness happens to be one of those variables that we know from cancer research is extremely consequential,” Robinson said. “Women that are more hopeless about their prospects for survival, the worse their outcomes are.”

In terms of both psychosocial and physical health, hopelessness can play a role in a woman’s quality of life, including the levels of depression and anxiety she experiences during treatment.

But research also shows that hopelessness can affect reoccurrence and mortality.

“Communication tends to have the most effects on psychosocial outcomes,” Robinson said.

“Breast cancer is a highly treatable and survivable disease, but it’s one of those diseases that women are most freaked out about, for obvious reasons—it has so many implications with their look and feel and life and relationships.”

When a woman is diagnosed with early-stage breast cancer, she can expect to deal with a long line of health care providers.

According to Robinson, a doctor can frame information by saying to a patient, “You’ve got a stage-two cancer. I suggest we do surgery, followed by chemotherapy, radiation, etc.”

Or the doctor can say, “You’ve got a stage-two cancer and that’s actually really good, because it hasn’t moved to the lymph nodes yet and your tumor is only 1.8 centimeter.”

“Virtually any fact or figure that doctors give can be framed as positive news, without lying about it,” Robinson said.

But hopelessness isn’t directly affected by facts and figures; it is affected more by the patient’s satisfaction with the surgeon.

“It’s exciting to me that there are measurable and specific communication behaviors that are associated with improved patient coping,” said Maria Venetis, a former PSU graduate student whose dissertation served as the pilot study for Robinson’s research.

“We do this research with the hopes of helping people, and some of our findings are the first steps in trying to improve the patient experience.”

Because the visits were filmed, Robinson can see how patients reacted to the types of communication presented by their surgeons, and use the positive and negative examples to help train doctors to have better communication skills.

MJ Dunne, a former PSU graduate student who worked with Robinson, sees a lot of potential for behavior training in the medical field.

“The research is really helping hospital staff learn how to respond appropriately and pick up on emotional and verbal cues from patients,” she said. “It can help doctors and surgeons give patients the reassurance they need.”

Robinson’s results will be published in the Journal of Clinical Oncology, and he will do teach-back sessions with the nine surgeons involved in the study to show them how their communication skills can be improved.

He also hopes to add communication skills to the continuing-education workshops all doctors must attend throughout their practice.

“Providers are very skilled at what they do, and I recognize that they may be hesitant to adjust their practices,” Venetis said. “However, most providers do want to provide the best care possible, and that includes communicating as well as possible.”

A Trip to the Moon revisited