Women’s soccer to face two conference away games this weekend

The Portland State women’s soccer team will look to extend their stay on the top of the Big Sky Conference table when they play Eastern Washington in Cheney, Wash., on Friday and Montana in Missoula, Mont., on Sunday.

Women’s soccer to face two conference away games this weekend

The Portland State women’s soccer team will look to extend their stay on the top of the Big Sky Conference table when they play Eastern Washington in Cheney, Wash., on Friday and Montana in Missoula, Mont., on Sunday.

The Vikings won their first regular season conference game of 2011 in a hard-fought road match against Sacramento last week. Junior forward Megan Martin scored a hat trick and junior goalkeeper Lainey Hulsizer made a record 14 saves to help the Viks secure the 3-2 win.

“Our games with Sacramento are always competitive,” Schott said. “Any time we get a conference win on the road and score three goals, it’s a big performance.”

With last weekend’s win, Schott became the joint leader for the most wins as Portland State soccer head coach. This was her 29th win as the Viking coach.

After their outstanding performances last week, Martin and Hulsizer were named as the Big Sky Offensive and Defensive Players of the Week, respectively. Martin currently leads the team with four goals and one assist this season.

“Megan had a tremendous game,” Schott said. “A hat trick on the road doesn’t happen often, and she scored some outstanding goals.”

This was Martin’s first hat trick for Portland State and the sixth goal of her career. She became the seventh Viking player to score three goals in a game. This season, Martin has attempted 29 shots, of which 20 have been on target. Martin’s strike partner up front is senior forward and captain Melissa Trammell, who has three goals and an assist this fall.

On the goalkeeping front, Schott has rotated between junior goalkeepers Hulsizer and Melissa Ferguson. Ferguson has played eight games this year while Hulsizer has started in four matches. Ferguson was named the Big Sky Conference Defensive Player of the Week in August.

This was the second time this season that Portland State took home both conference Player of the Week awards. In August, senior midfielder Amanda Dutra and senior defender Esty Geiger were named the Big Sky Offensive and Defensive Players of the Week during the period.

Friday’s opponents Eastern Washington currently languish at the bottom of the Big Sky table having lost their opening game 0-1 against Montana. The Eagles have won just one game out of nine games this season.

Last season, the Vikings kicked off their regular season with a 3-0 win against Eastern Washington. Dutra, Trammell and sophomore winger Eryn Brown were the goalscorers on that occasion.

On the other hand, Montana is all level on points with Portland State, as they won their first game against Eastern Washington. The Grizzlies are 4-7-1 overall and will play Sacramento State on Friday before they take on the Viks on Sunday.

The Vikings will have to beware of Montana’s Erin Craig who leads the conference in goals (9) and attempts on goal (39). Montana is currently the conference leaders in goals, but they also have the second worst defensive record for the number of goals conceded.

In 2010, the Vikings demolished Montana 3-0 in their second regular season game at home in Hillsboro Stadium. Senior forward Frankie Ross and Hannah Kimsey were the goal scorers in that game.

Live stats from both the games can be followed online at GoViks.com. 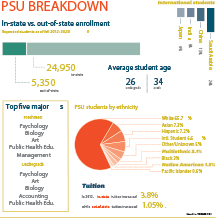