Research and advocacy group OSPIRG is no longer considered a student group by the organization that runs all of Portland State’s student groups.

Research and advocacy group OSPIRG is no longer considered a student group by the organization that runs all of Portland State’s student groups.

OSPIRG will not be classified as a student group because the group’s mission statement refers to it as a corporation, instead of a student-led group, according to a memo sent to PSU administrators and OSPIRG leaders Monday morning by Natalee Webb, the OSPIRG advisor in Student Activities and Leadership Programs (SALP).

For the time being, the Oregon Student Public Interest Research Group (OSPIRG) will not have access to services that other student groups receive under SALP such as accounting, advising and the right to reserve on-campus rooms as student groups, Webb wrote in the memo.

Alongside those restrictions, the group may also be temporarily unable to access their entire budget for this school year. To fix the situation, OSPIRG leaders will have to find an organization or department at PSU to sponsor it in the same way that SALP did, the memo states.

The memo states that students do not determine the PSU OSPIRG mission and purpose, and that the group’s primary leaders are not PSU students. Most of the more than 100 PSU student groups are advised by and administered through SALP.

SALP is meant to advise groups that are student-run, student-led, and student-organized, said Aimee Shattuck, interim director of SALP. She said that the PSU OSPIRG constitution, which describes the group’s mission and purpose, does not describe a group that is student-led or organized, but instead describes itself as a corporation.

OSPIRG, which is a subsidiary of the group with the same acronym that focuses interests specific to the state of Oregon, instead of only students, was funded $128,235 from the Student Fee Committee last year. The Student Fee Committee will now have to decide whether OSPIRG will receive any of its funds, said committee chair Amanda Newberg, because SALP no longer considers OSPIRG a student group.

Newberg said that the close to $128,000 was given to OSPIRG on the basis that it was a student group under SALP. She said that she wants to hear the opinions of OSPIRG’s students before she and the rest of the committee make a decision.

The Student Fee Committee will allocate over $12 million this year for the more than 100 student groups, including The Vanguard and athletics. 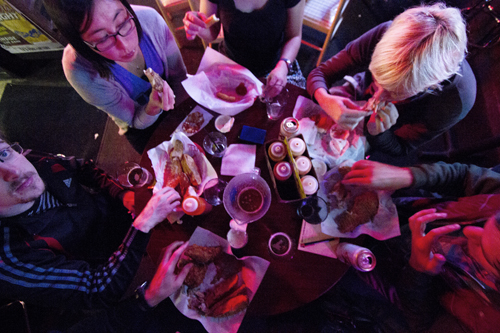 Put it in your mouth: Tibet Kitchen serves up hearty Himalayan goodness