Faced with the ever-encroaching march of time, how do historians and educators respond when the people they are studying begin to die?

Faced with the ever-encroaching march of time, how do historians and educators respond when the people they are studying begin to die? 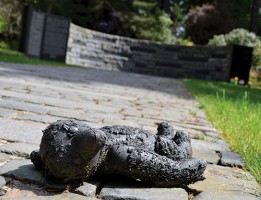 A Cast-iron teddy bear is part of the Holocaust Memorial in Portland’s Washington Park.

The Oregon Holocaust Resource Center hosted a seminar over the weekend in Smith Memorial Student Union to address this very question, bringing together survivors and scholars for a town-hall style discussion about the future of Holocaust education in Oregon.

“We are clearly approaching a post-survivor world,” said Rob Hadley, Oregon liaison to the U.S. Holocaust Memorial Museum and a teacher at Clackamas High School. The OHRC calls Hadley one of the top Holocaust studies educators in the state.

“Our goal should be to find ways to keep using their voices in ways that are both effective and appropriate,” he said.

The OHRC, a nonprofit organization founded in 1983, aims to educate Oregonians about the ongoing lessons of the Holocaust despite the 70 years that have passed since it occurred.

The Sunday event began with an introduction on key themes by OHRC Executive Director Sonia Leikam and Dr. Natan Meir, an assistant professor of Judaic Studies at Portland State.

Meir addressed the changing nature of Holocaust studies throughout academia and the impact of the loss of the survivors’ generation. Many scholars are tracing the roots of Nazi ideology back in time to better understand the conditions that led to the Holocaust.

In the wake of these challenges, scholars are attempting to reframe Holocaust studies within a broader framework of comparative genocide studies. This allows scholars to see similarities between, for example, the Holocaust and the Rwandan genocide—watershed events in two different parts of the world, separated by half a century.

For some educators, this provides a way to deal with the loss of firsthand accounts from Holocaust survivors in the classroom.

Board member Elaine Coughlin explained how the OHRC is exploring a move toward this comparative model as they begin to lose members of their speakers board—a group of Holocaust survivors who travel to public events and classrooms across Oregon to share their testimonies.

But to Meir, this reframing could threaten to de-emphasize the singularity of the Holocaust in history.

“We need to make sure we define exactly what makes the Holocaust unique, otherwise we risk delegitimizing genocide as a whole,” she explained.

Ginny Hoke, a high school language arts teacher from Thurston, Ore. who has been praised by the OHRC as one of the top Holocaust teachers in the state, explained her success using survivor testimony videos from the USHMM website in the classroom.

Hadley helped illustrate Hoke’s comments, explaining how he realized that Holocaust studies are racing against the clock after finding a box of videotapes with survivor testimony, a trend Hoke believes is growing as the survivors’ generation overlaps with the era of widespread technological documentation and recording.

Hadley and Hoke teach programs designed around measured use of video testimony and, when available, survivor or second-generation classroom presentations. Their programs both culminate in field trips to the Oregon Holocaust Memorial in Washington Park, which is becoming a more important tool as access to survivors diminishes.

“Our goal is to find a way to connect testimony to the names on the wall at the memorial, and then to be able to connect that memorial back to the rest of the community as a whole,” Hadley said, explaining the impact the memorial has had on his students.

The memorial was designed in part to emulate a first-person encounter of the Holocaust experience. In addition to names of the deceased, concentration camp soil brought by survivors is interred next to transcribed survivor testimony.

But as budget cuts make field trips more difficult, and as access to survivors begins to diminish, many educators like Hoke realize the ever-increasing importance of testimony within the classrooms.

While technology has afforded many students opportunities to hear stories that illustrate a side to the Holocaust not found in statistics and political studies, others pointed to the time still available with survivors, reenforcing the unique experience one can gain by learning from a survivor face-to-face.

Deb Mrowka, who often speaks alongside her mother, survivor Eline Hoekstra Dresden, explained how the impact from a first generation survivor is often a much deeper moment for students than the distancing effect that comes with viewing a video.

Questions still remain about the future of Holocaust education, but everyone at the event could agree on the importance of framing the discussion from a personal and transformative perspective. For Hadley, it’s just another step forward in living the “never forget” phrase so often linked with the Holocaust.

“I often hear students tell me they feel disempowered by history,” Hadley said. “We must find ways to turn it around and give them tools to empower themselves, with the same lessons still intact.”

An end to mutant milk and cheese