Take a walk down the Park Blocks near campus, and you’ll notice that something isn’t quite the same. There’s been a dramatic change in the tree canopy between Cramer Hall and Smith Memorial Student Union. 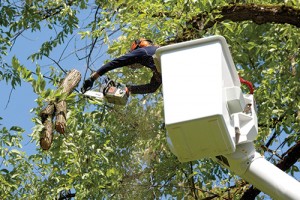 Jerome Johnson, a lead arborist with the City of Portland, leans out of a tall cherry picker to remove branches from a 120-foot elm on the Park Blocks next to Cramer Hall.

Take a walk down the Park Blocks near campus, and you’ll notice that something isn’t quite the same.

There’s been a dramatic change in the tree canopy between Cramer Hall and Smith Memorial Student Union.

A 120-foot elm tree that once towered over the Park Blocks was removed last week, giving sun and rain a new opportunity to pour down on walkers below.

It’s one of 14 elms that have been or are being cut down in the Park Blocks. After several incidents occurred within the past year—including a tree crashing onto St. James Lutheran Church and several vehicles—many of the aging elms in the South Park Blocks came to the attention of the City of Portland’s Department of Urban Forestry.

Larry Maginnis, an urban forestry supervisor on the project, explained the difficulty with this particular elm. A special tool was used to bore into the tree to determine the amount of live versus dead wood, revealing a high percentage of decayed wood—enough to place it on the “immediately remove” list.

There were two separate decay pockets, or cavities, on the elm where previous storm damage had begun to rot and weaken the tree. If the tree absorbed too much water it could have broken and fallen from the weight, posing a potential serious hazard to a person walking below.

“Trees don’t heal, they seal,” Maginnis explained. “And here, there’s too much tree above the seal.”

The removal process itself is a risky one.

“It’s one of the most dangerous professions out there,” said Maginnis. “Our number one goal is safety.”

With an elm that climbs about 120 feet, the bucket that hoists the tree cutters up doesn’t reach the top, so rope pulleys and manual climbing are needed.

Jerome Johnson, who has been in the tree-cutting business for 30 years, explained what it was like to climb the elm before it came down: “When I was climbing, it was hard—you just have to get used to it.”

Johnson said that the wood of this particular elm was so fibrous that the strength of even the smallest attached piece could keep a dangling branch from falling. The climbers cut the branches from underneath so that when the branches fall it happens in one motion instead of swinging and falling bit by bit.

Once up in the tree, after the safety harnesses have been placed and secured, Johnson prefers to “feel it out” than to apply a plan, since each job is different. His knowledge and expertise comes from his many years of experience.

Johnson confirmed that the trees in the South Park Blocks have been watched with a cautious eye over the past few years.

“We’ve been doing emergency work constantly,” he said. Removing this elm was a preemptive measure, however—an attempt to stop an emergency before it happens, to ensure the maximum safety of pedestrians below.

However, it appears that those walking beneath the trees have different opinions about the removal of the ancient elm.

Langston McClarron, a new student orientation leader who was tabling in the Park Blocks during the process, said it’s sad when a tree is cut down. “They’re important,” he said, adding, “It’s going to look really weird.”

“It makes sense,” said Dane Johnson, a passerby. “They have a certain amount of life, and when they start to go, it’s dangerous.”

The most ardent sentiment, however, came from elderly Jean Newman: “How dare they,” Newman said. “How dare they cut down that tree. It’s older than I am!”

The goal is to replant another tree in its place, but this time it will be an elm that has been modified to be immune to Dutch elm disease. This modification will improve the future elm’s chances of surviving longer.

“We do a tree-for-tree,” Maginnis said.

There are plans in the works for the tree to be replanted either during the upcoming Arbor Day or Earth Day, when a tree-planting ceremony will take place.

New to the Northwest