Six minutes into the first quarter of their matchup with Montana State University, Portland State tailback DJ Adams broke free and raced 69 yards for a touchdown to cut the Bobcat lead to 10-7.

Six minutes into the first quarter of their matchup with Montana State University, Portland State tailback DJ Adams broke free and raced 69 yards for a touchdown to cut the Bobcat lead to 10-7. 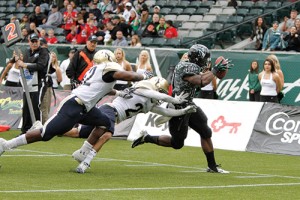 Stampeded: Portland didn’t have much room for error against conference-leading Montana State University. The Vikings kept the score close early on but ultimately lost 65-30.

The score erased the early advantage Montana State had gained after converting a fumble by quarterback Kieran McDonagh into a quick touchdown. After the Viking defense forced the Bobcats to punt on their next possession, it appeared that PSU was poised to seize the momentum.

Then the Bobcats showed why they are the top-ranked team in the Big Sky Conference. Cornerback Darius Jones intercepted McDonagh on the next PSU drive, and Montana State scored three plays later to regain a 10-point lead. It was the first of seven straight touchdowns by the hosts in the first half on their way to 65-30 win

McDonagh’s struggles were indicative of the difficulty the Vikings had all night against what is also the top-ranked defense in the conference. The freshman quarterback was pulled in the second quarter shortly after Montana State free safety Steven Bethley returned McDonagh’s second interception 32 yards for a touchdown, increasing the Bobcat lead to 45-7. McDonagh completed just two of his nine pass attempts for a total of two yards, with two interceptions and two sacks, before being replaced by Collin Ramirez.

Ramirez, the transfer quarterback who broke Aaron Rodgers’ single-season touchdown record last season at Butte Junior College, eventually managed to move the Viking offense downfield. But the damage was done—by the time Zach Brown struck a 25-yard field goal at the end of the second quarter, Montana State had already built a
59-10 lead.

The Vikings heated up in the second half, putting together four scoring drives and accounting for the final 17 points of the game against the Bobcat reserves. Ramirez finished the game with 130 passing yards, completing seven of his 14 attempts in relief and connecting with Justin
Monahan for a touchdown.

After the game, Viking head coach Nigel Burton insisted there was no quarterback controversy. “I was worried that the game was getting out of hand for [McDonagh] and he was reaching,” Burton said of the switch. “But he’s still the starter. He’s still our guy. Sometimes you have to go through that adversity.”

Despite the rout, there were some positive aspects of Portland State’s performance. The running game notched 295 yards, 75 more than its season average and 200 more than the Bobcats allow on average. DJ Adams had his fourth game with more than 100 yards, and senior fullback Ben Bowen went off for a 61-yard touchdown run in the fourth quarter.

In the end, though, the Bobcats dominated in every facet of the game, retaining the number-two ranking in the Football Champion Subdivision polls behind North Dakota State University. But they still need some help to win the Big Sky Championship.

On the final Saturday of the regular season, the Bobcats will be one of PSU’s biggest fans as the Vikings host conference leader Eastern Washington University in the battle for the Dam Cup. Since the Eagles beat Montana State earlier this season in Bozeman, they’ll claim the tiebreaker in the event that both teams finish the season with one conference loss each. Should the Vikings upset Eastern Washington on Saturday, the conference title goes to the Bobcats.

Even though the Vikings are well out of the race themselves, they still may end up deciding who gets crowned Big Sky champion.