On Jan. 24, George Black and David Stowell opened the doors to Veganopolis, located at 412 S.W. Fourth St., between Stark and Washington streets. Co-owners Black and Stowell have been avid chefs for years and ran Chef to Go, a vegan lunch cart at Southwest Park Avenue and Yamhill Street. Black describes the restaurant’s opening as the culmination of "a plan 20 years in the making."

Judging from the overwhelming popularity of Chef to Go, much of the downtown lunch crowd – vegans and non-vegans alike – also looked forward to the opening of Veganopolis with great anticipation.

The restaurant, which the staff describes as "cafeteria-style," is infused with a hip, minimalist atmosphere, making one wish that this had been their school cafeteria. Because the restaurant’s assortment of goodies mostly consists of delicious, healthy versions of familiar fare, it is sure to not only satisfy discerning vegans but also to remain accessible to non-vegans, as well.

I fear the name will keep many from sampling the menu, but non-vegans who’re curious enough to brave the stigma often attached to vegan food will be rewarded with tasty, inexpensive food in a stylish breakfast and lunch spot.

Even though the menu is not threatening to non-vegans, it certainly supports and caters to veganism. The ingredients have been researched to the extent of calling manufacturers to verify that they are absolutely vegan. Strict vegans and curious onlookers have access to a book that lists the ingredients for every item on the menu.

The lunch menu is a direct extension of the Chef to Go menu, and consists mostly of sandwiches and fresh salads along with a daily soup special. They have also extended their repertoire with their breakfast menu, which includes a rotating buffet of breakfast foods sold by the pound for $5.25, such as tofu scramble, biscuits and gravy and even crepes, as well as bagel sandwiches and assorted bakery items (wheat free, for those of you with allergies).

In order to review the restaurant without a dietary bias, I invited two non-vegans to join my partner and myself (both vegan) for lunch. One is an omnivoire, the other a lacto-ovo vegetarian. Everyone found something enjoyable to eat.

Those involved in the recent Portland pt퀌� debate should meet for lunch and try the almond pt퀌� sandwich (with wheat, rye or como bread) hopefully rendering the argument moot. This was our table’s favorite menu item. Made from soaked ground almonds along with vegetables and dulse (a sea vegetable), the pt퀌� has a smooth consistency that melts on your tongue and would no doubt go well with any of the bread choices.

The roasted eggplant sandwich on baguette was just as enjoyable. Think you hate eggplant? Try this sandwich and think again. The baguette itself made it a little difficult to get to the best part: roasted eggplant with spinach, tomatoes, roasted red pepper sauce and your choice of almond feta or soy mozzarella (I recommend the feta) but the resulting jaw ache and messy lap is well worth it. The seitan caesar sandwich was just as enjoyable – the braised seitan with a mustardy caesar dressing would keep anyone from getting nostalgic for the meaty version.

The grilled vegan cheese, tomato and onion melt, however, was slightly bland. The grilled onions were delicious, but there was so little of any of the sandwich filling that it was like eating toast. Also disappointing was the soup of the day. It was a good basic tomato soup, but just plain boring. Although it tasted fresh, the recipe could have come from the back of a can.

Most sandwiches range from $5 – $6 and come with a choice of kettle chips or slaw. There is also a "solo sandwich" menu with prices ranging from $4 – $5; fresh salads range from $5 – $6. Nothing on the menu is over $6, making the prices more cafeteria-style than any other part of your dining experience.

Desserts are available from the bakery case. I recommend the double chocolate brownie if you like chewy, gooey brownies. It is so sweet that you won’t mistake it for healthy fare.

There were a few kinks that need to be worked out, such as a long wait and order mishaps, but these are common for new restaurants and are likely to be resolved quickly. Black mentioned plans for another grill and expanded food preparation in the near future.

I would like to see Veganopolis expand its menu beyond sandwiches and show off their creative potential, but it will be my favorite breakfast and lunch spot nonetheless. 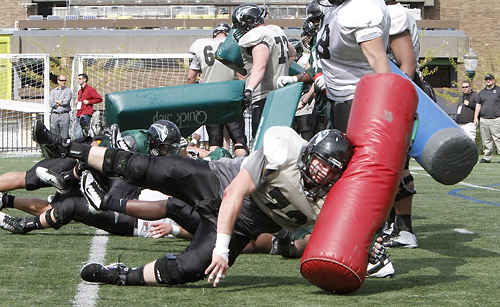