Lists ‘best and worst’ majors by income and employment

Not all majors are created equal, according to a new study, and some are quite literally more valuable than others.

In May, the Georgetown University Center on Education and the Workforce published a report called “What’s It Worth? The Economic Value of College Majors,” which found vast differences in income and employment rates between various fields of study.

Lists ‘best and worst’ majors by income and employment

Not all majors are created equal, according to a new study, and some are quite literally more valuable than others.

In May, the Georgetown University Center on Education and the Workforce published a report called “What’s It Worth? The Economic Value of College Majors,” which found vast differences in income and employment rates between various fields of study.

The 10 worst college majors for a lucrative career:

The 10 best college majors for a lucrative career:

As a result, dozens of financial websites like Kiplinger.com and Forbes.com, and even Time Magazine online and CBS News, posted lists of the “worst” and “best” majors for income and employment, calling studies in English, sociology and the arts the “most worthless” or “useless” college majors.

Disheartened by the simplicity of such lists, Virginia Butler, a Portland State professor of anthropology, is eager to call out the foolish and inaccurate nature of such reports.

Especially since her own field of expertise, anthropology, is ranked as the number one “least valuable” degree.

“That hurts,” she laughed.

According to the study, recent anthropology grads can expect to earn less than someone with a high school diploma and encounter a 10.5 percent unemployment rate.

Butler cited the study as inaccurate because of its overly simplistic attention to the short-term economic value of the various degrees.

“While maybe students can leave PSU with higher earning in certain fields, that is not all of life’s value,” Butler said. “Even someone in engineering would say income is a narrow view of life’s value.”

To boot, every other field needs and hires employees who understand human behavior; even Intel hires anthropologists, Butler explained.

“There might be economical realities out there where the United States needs more
students in science, technology, engineering and math fields, but we need people even in those fields to understand cultural diversity,” she said.

Rather than rank fields of study on a scale of good and bad while discouraging the study of liberal arts, Butler thinks a better solution would be bridging the humanities and sciences.

“Even in my [anthropology] research I’m trying to bring in more science,” she said.

She would like to see similar bridging practices at PSU.

Former PSU art student Devon Mitchell, who graduated in 2011, agrees that universities should not take their resources from the humanities and pour them into higher-earning fields.

“In my opinion, it’s not a service for the collegiate world to focus its resources in business or [other] degrees that lead specifically to careers,” said Mitchell, who is the coexecutive director of a new Portland nonprofit called Portland Child Art Studio.

“A lot of the benefit of college is reading, and critically thinking, and writing, and learning to thoughtfully articulate. I think those are really fundamental skills we’re kind of losing in universities,” she said.

With bachelor’s degrees in both economics and art, Mitchell understands the worth of a degree is relative. “I finished my degree [in economics] and I had work experience in the nonprofit world; I actually went to Bolivia to work with some textile female cooperatives there, but what I discovered was that I didn’t want a desk job,” she said.

Mitchell decided to pursue her passion for art over the potential financial payoff
of desk work.

Mitchell’s PSU painting professor, Susan Harlan, applauds her and other students who seek to fulfill their calling rather than to make the most money.

While the Georgetown University study does show that majors associated with specific occupations, like health care and education, have higher employment rates,
Harlan does not see that as a viable reason for an artist to choose engineering over painting.

“While some degrees, like law, have professions attached to them, art is a calling. Your whole life is your career,” said Harlan, who was a trial artist in Washington, D.C. and New York City for 12 years.

“I always tell my students that they have to supplement their art somehow,” she said. “You just have to find something that doesn’t drain you so you have energy left for your art.”

Harlan was also comfortable sharing anecdotes of friends who sought success over passion and who, in the long run, were unhappy.

“A lot of students who are influenced by their parents or society, and who pursue something [practical] like law over art—are they happier? No. So then I get them back in my [art studio studying art] when they’re 35,” she laughed.

Though architecture currently has the highest unemployment rate of any field as a result of the recession (13.9 percent), Knights has not seen enrollment or student interest negatively affected.

“The only thing that might stop students from studying architecture is rising tuition,” he said.

He added, “Education’s value is how it enriches you as a human being, not its monetary return.” 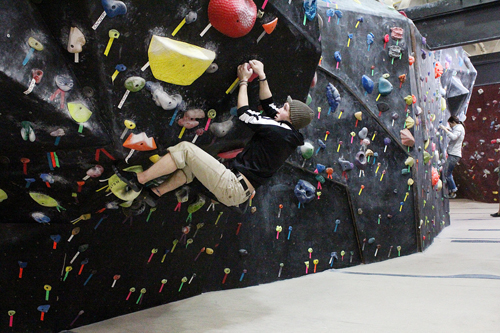 An evening in motion