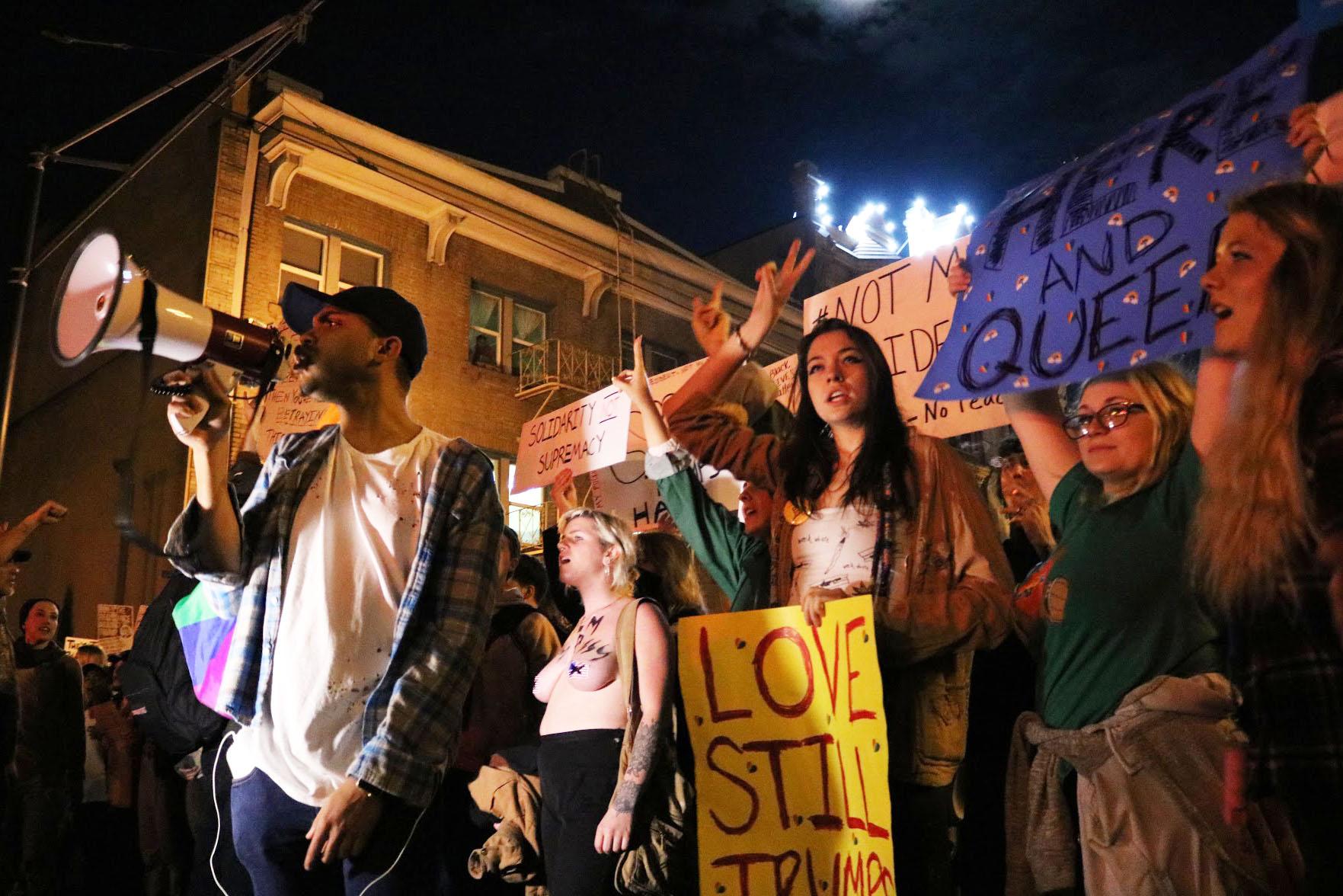 In the wake of the election on Tuesday, Nov. 8, thousands of protesters took to Portland streets for a third consecutive night on Nov. 10. Similar protests have also taken place in several major cities across the United States.

The protest, referred to as #NotMyPresident, began at Pioneer Courthouse Square where speakers from several local activist groups spoke out against the Donald Trump presidency.

Gregory McKelvey, a spokesperson for Don’t Shoot Portland, has announced the formation of a new organization called Portland’s Resistance. McKelvey addressed the large crowd about the marching that would take place.

“Our group does not condone violence, vandalism or destruction in any way,” McKelvey said. “However, it is not our job to censor anyone’s activism. If we do that, we might as well call the police ourselves. Our job is to lead by example, and that example will be peace.”

Once the march began the crowd departed from Pioneer Square and made its way to the waterfront, where the protesters joined a rally advocating for LGBTQ rights. It was there that McKelvey stated the group’s demands of the city of Portland.

The issues included police accountability, rent control, and an end to no-cause evictions.

“We are Portland’s Resistance and we will continue to be a resistance so that Portland can be a beacon of light in what is not a very dark country,” McKelvey said.

The protest marched east and overtook the Hawthorne Bridge, where traffic was stopped before heading north on SE Grand. Here, organizers called for a four-and-a-half-minute moment of silence in solidarity with Michael Brown, who in August 2014 was fatally shot by police and left dead on the ground for four-and-a-half hours.

When the march commenced, dozens of different chants could be heard at any given time. The crowd voiced their resistance to a Trump presidency proclaiming, “We reject the president elect,” or “My body, my choice”. The consensus of the crowd was that Trump did not represent them and that his ideologies are hateful.

Angelita Morillo is a Portland State student studying political science and legal studies. She joined #NotMyPresident to express her frustrations with the election process.

Morillo believes the Electoral College to be an outdated practice that consistently differs from the popular vote and doesn’t accurately represent the votes of the people.

“I think that it definitely illegitimizes the need to vote,” Morillo said. “People don’t feel like they need to because it doesn’t actually turn out the way that we want it to.”

Though final results are still being tallied, it is estimated that 43–46 percent of eligible voters did not vote in this election.

The protest grew even larger once it made its way to Holladay Park at the Lloyd Center where it merged with another group, the Anarchist Black Cross.

An Anarchist Black Cross member told the crowd, “We are not just about destruction, but about bringing power to the people.”

The crowd grew in numbers but was still peaceful as protesters from Portland’s Resistance and the Anarchist Black Cross made their way across the Broadway Bridge.

Once in the Pearl District things quickly became destructive. At this point the protest split. McKelvey encouraged protesters to stay peaceful, and they headed back to Pioneer Square.

“Debriefing at 10 at Pioneer Courthouse Square. This is a peaceful meeting, all our actions are. Police are moving in on violent protesters,” #PDXResistance posted on their Twitter at 9:46 p.m.

The branch of protesters who moved to the Pearl smashed storefront windows; trash cans and newspaper stands were set on fire, and a number of car windows were bashed.

Many of those from the original protest spoke out against the vandalism chanting, “Peaceful protest,” or “Smash the patriarchy, not the property.” Destruction continued.

The march was met by police forces at the intersection of Park Ave. and West Burnside. Police forces used flashbangs to steer the crowd up SW Broadway towards Pioneer Square.

Once at Pioneer, the crowd began to dwindle in numbers as many of the peaceful demonstrators had dispersed. By midnight most if not all of the peaceful protesters had gone home. The remaining protesters continued to set fires and hurl rocks and other objects toward the police line.

A police presence brandishing riot gear continued to grow as PPD was joined by the Oregon State Police. Police responses included flashbangs, tear gas, and the shooting of rubber bullets.

The night had started out with messages of love trumping hate. #NotMyPresident was a peaceful protest, but as with many protests it gained its share of opportunists. The destruction, vandalism, and violence became the story of the night. 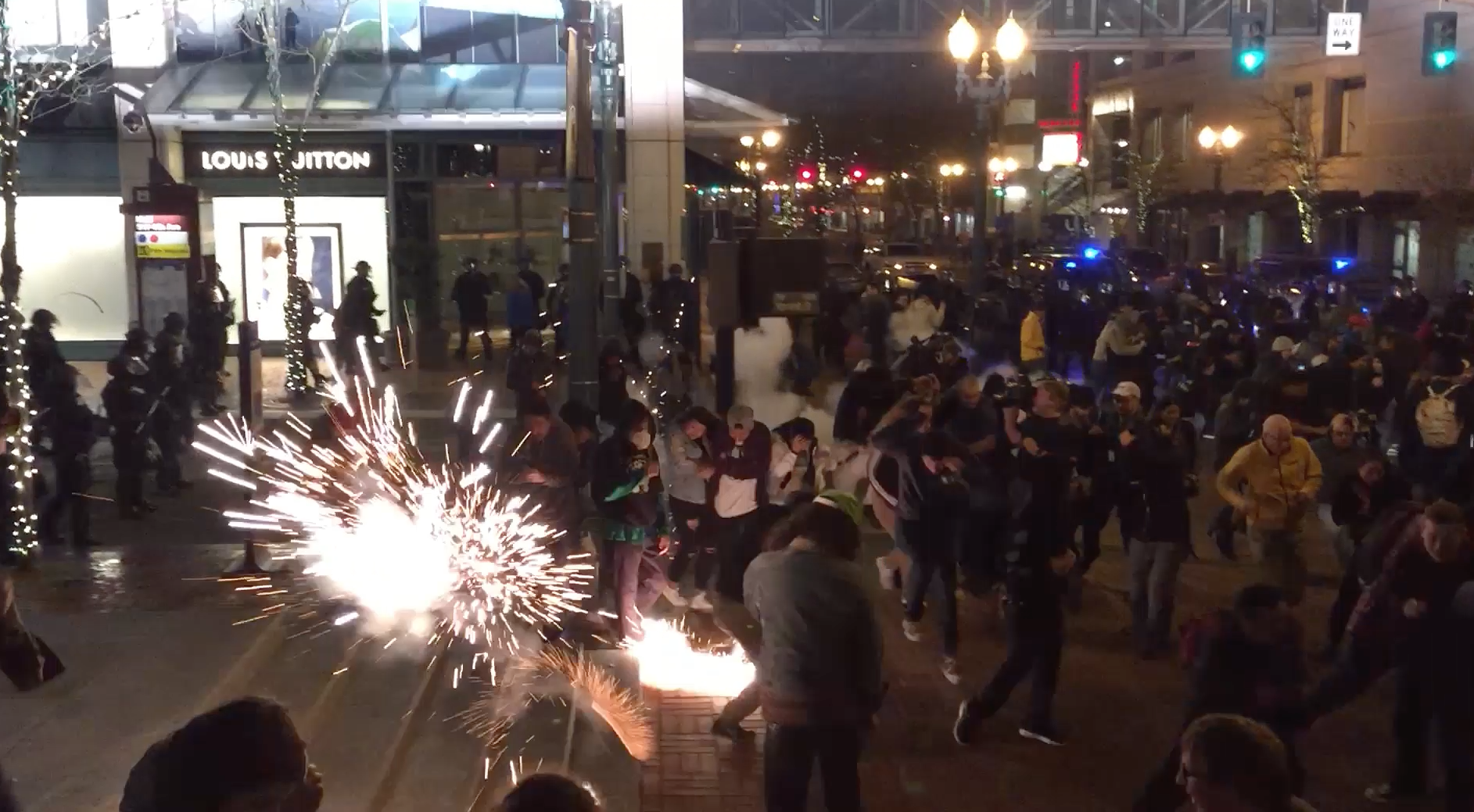