Oregon has always been a pretty racist place to live

Given this fact, and the fact that Portland State is Oregon’s largest university, does it follow then that PSU is a pretty racist place to attend school? In my experience, and in the gut feelings of many students, the answer is yes. But it’s hard to prove.

As I reach the end of my undergraduate career here, I’ve been wondering – is PSU truly the liberal enclave of diversity and open-mindedness it purports to be? Or is it just another beleaguered state school floundering in the bog of bureaucracy and under-resourced good intentions?

Let me start by putting to bed any doubts you may have as to Oregon’s racist history by beginning with a recent example. Last fall Rami Makboul, the ex-manager of the now-defunct Vue nightclub, once a happening hip-hop spot, wrote emails to mayor Tom Potter about how African-Americans “belong in Northeast Portland and should not be encouraged in any way to come to downtown.” The manager claimed he was echoing statements made to him by an OLCC staffer months earlier.

Back in 1988, there was the murder of Mulugeta Seraw, an Ethiopian PSU student, by members of the East Side White Pride gang. It is an event that Portland is “still trying to get over,” according to racism expert and Portland State University assistant professor Randy Blazak, commenting for the site Tolerance.org.

Elsewhere in Oregon, the city of Grants Pass has had a long and sordid history of entanglement with the Klu Klux Klan. A number of racist and white supremacist groups have a strong presence all along the I-5 corridor, especially in southern Oregon communities such as Corvallis, Medford, Eugene and Salem.

You can go back even farther to the immediate post-WWII years, when Vanport (a city of 18,500 with a population that was 27% African-American) was flooded. The 10,000 citizens evacuated and housed by the Red Cross were disproportionately white. In fact, the Housing Authority of Portland and local real estate agents engaged in discriminatory practices, such as attempting to isolate black homeowners and renters in the Albina district of Portland. Despite protestations of unfair treatment from the Urban League of Portland, the majority of Vanport survivors who ended up in the Albina district were either black, low-income, or both and it took some of them five years or more to find permanent housing.

On a more personal level, I have heard anecdotally from friends that Portland is extremely racist, albeit in a much more subtle way than other parts of the country. One African-American coworker even went so far as to tell me he preferred to live in the deep South, where he grew up, where racism was overt.

My experience with racism is not entirely hearsay, however. I have encountered it in work environments, particularly in the context of the local alcoholic beverage and entertainment industries (closely married as they are) where racist attitudes seem to be subtle and endemic, though not visibly institutionalized. A number of years ago Robert Larry – who is, wouldn’t you know it, one of only three African-American liquor store owners in the state of Oregon – accused the OLCC of hassling him. The commission charged him with selling alcohol without checking ID. He provided a surveillance tape that proved the charges groundless. Several years later, the OLCC alleged that Larry had made “accounting errors” and therefore owed them $40,000. During testimony, Larry said, “What you have before you is the modern-day lynching of a black man.”

But is the PSU student body truly representative of the diversity (or lack of) present in the city at large?

Based on census data and the 2004 Fall Fact book, it looks like PSU really only falls down in enrollment of African-Americans and Hispanic or Latino students, which make up 3.2 percent and 4.2 percent of the student body respectively, approaching neither the national averages nor even the local populations where African American make up 6.8 percent of the population and Hispanics or Latinos compromise 9 percent.

If I may be so bold as to echo publicly a statement that I’ve heard made many times, of the 3.2 percent of PSU students who are African-American, it seems that many of them are on one or more athletic teams.

So is PSU truly diverse? In some ways, yes. Ethnically, the question is open. Certainly it is more diverse than most other Oregon universities – which is perhaps unsurprising considering how rural they are.

But is racism alive and well at PSU? 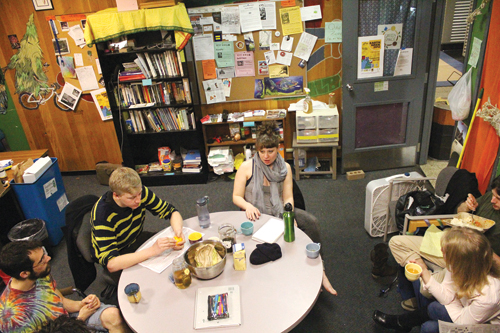