A sweeping renovation of Shattuck Hall will begin after Governor Ted Kulongoski signs the higher education bill in the next few weeks.

Shattuck is just one of the major Portland State construction projects expected to be authorized in the legislative bill, but the building is expected get immediate attention.

“It’s going to be a very exciting job,” said Mike Irish, assistant director of facilities. “Basically we’re going to take the building apart and put it back together, without losing its architectural integrity.” Invitations to bid on design will be issued and design work, he predicted, will take six to 12 months.

Built in 1911, Shattuck is one of the oldest buildings on campus and has several drawbacks for tenants. It suffers from inadequate cooling and heating. Huge windows in the upper floors give it a sweeping vista but add to the interior summer heat. What heating it now has is derived from the central heating plant in Cramer Hall.

But both Irish and Cathy Dyck, interim vice president for finance and administration, consider it a worthy building from an architectural and aesthetic point of view.

The renovation project is penciled in at about $13.7 million. However, it is only part of the overall project that includes creating the new heating and cooling loop that will eventually extend from Cramer to Shattuck to Stott Center, Millar Library, Extended Studies and back to Cramer. About $1.1 million is allocated to the heating plant, which will require one new chiller.

By next summer, Shattuck will be totally vacated. New ductwork will be installed along with mixing boxes and there will be a seismic upgrade.

Some of Shattuck’s present occupants will not return. The data center, which occupies what Irish calls “a rabbit warren” in the first floor annex, will move to the Fourth Avenue Building. As part of the renovation, the first floor – which actually seems more like a basement – will be completely reconfigured. The Shattuck interior will be restructured into various rooms including classrooms. Completion, Irish predicted, will require about two years.

The budget for major construction projects in this biennium also would include a student recreation center, new parking construction, Smith Center renovation and retail development if passed by the legislature in its present form. There will also be a new heating and cooling pipeline loop for the west side of the campus.

In line for future development are purchase of the city-owned tower of the Fourth Avenue Building and redevelopment of University Place. All the proposed projects are ticketed to pay for themselves in the long run, either from revenues, lottery bonds, or energy conservation loans.

The Shattuck project, like other imminent projects, is to be funded from various sources, Dyck said. About half the Shattuck lottery bonds will fund the project, the other half from energy saving loans under the State Energy Loan Program (SELP).

Dyck said the energy money comes out of the state general fund operating budget for debt service and sometimes has not been approved.

The capital construction budget also includes $30 million for much needed parking, paid for from revenues. Parking would be constructed in various locations, one of them being two underground levels at the PCAT location.

At the moment, the bill has been reported out of the appropriate subcommittees of both houses of the legislature and may soon reach a House of Representatives floor vote. Legislature observers predict the final bill may eventually be worked over in a House-Senate conference committee. 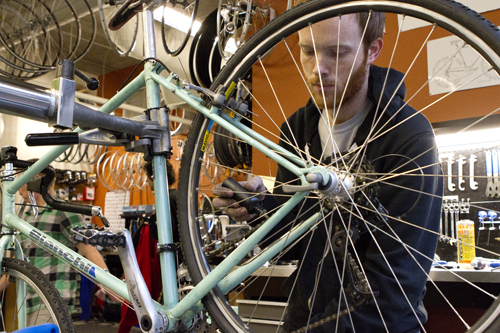 Put some fun between your legs

Ritchie and ‘the wife’ take a chance on being ‘Swept Away