Liz Harris, aka Grouper, is the queen of local ambiance. When she performs, Harris more often than not chooses to sit on the floor, legs crisscrossed, effect pedals spilled out in front her, using her hands to loop, twist, warm and cool her variety of ethereal tones.

Liz Harris, aka Grouper, is the queen of local ambiance.

When she performs, Harris more often than not chooses to sit on the floor, legs crisscrossed, effect pedals spilled out in front her, using her hands to loop, twist, warm and cool her variety of ethereal tones. While the setup simultaneously establishes closeness and openness, the soundscapes of Harris’ Grouper begin as they take off into the hazy world of their own, leaving the willing listener either enveloped or feeling slightly confused or (more often than not) both.

Grouper is the imagination of one woman translated into ambient sound and accentuated with hushed yet powerful vocals. Harris doesn’t seem to be in a hurry to please anyone. She does things at her own pace, which gives her music a refreshing feeling of open time.

Harris’ anonymity in song is echoed by her recording history. She came out with a CD-R called Grouper in 2005, which was the unassuming genesis of her band. That same year Harris released Way Their Crept on Free Porcupine Records.

Harris released songs as they came to her whether it was a 3-inch or a 12-inch or whatever other format she could find. Grouper’s music is released when it needs to be and not under any time constraints or by anyone else’s coaxing.

Because of the “when the moment’s right” release schedule of her music, Harris has had ample time for musical collaborations.

In 2006, she collaborated with Xiu Xiu to release Creepshow, 2007 found the re-release of Way Their Crept and the onset of 2008 turned out her most accessible album yet, Dragging a Dead Deer Up a Hill.

The comparisons made to Grouper do not seem to do her justice. And it really is all about “seeming” and “perception.” How things seem and how things are perceived in Grouper’s music makes comparisons fruitless. She may seem to be shoe-gaze, My Bloody Valentine and have the voice of a more spacey and floaty Vashti Bunyan, but it is all forgotten when something new starts.

The ability Harris has to lose people in song is her true gift. It is where comparisons die away and it is left up to the listener and musician to experience together. And this seems appropriate, as Harris grew up in a Northern Californian commune inspired by the philosophy of Armenian mystic G.I. Gurdjieff. The commune was known as the “Group,” thus the aptly titled Grouper would follow many years later.

“I was getting these e-mails from [Eva Saelens of Inca Ore] about being lost in Mexico,” says Harris about her split CD with Inca Ore, and the subsequent move up to Portland. “She had gone on a purposely unplanned and unfunded trip, with fevers, feeling alternately happy and alone in an unknown place. I was up here in Portland in the winter, feeling very alone in a new place, but more internally alone I think; alone with people all around, looking for my neighbor’s cat that had disappeared mysteriously, out on its own journey.”

And this is ultimately what Grouper’s sound is like: different people on different journeys, just happening upon each other at a fork in each other’s wanderings.

When on stage, Grouper is like a hermit’s dwelling being turned inside out and displayed to an audience. There is very little movement from Harris when she sings. The noise becomes the movement.

“It felt worse,” Harris continues about the genesis of her music, “like a bad spell that was sweeping things around me, a part of me, the cat, Eva, off to somewhere dark, portal-like, possibly not in the same plane as everything else, someplace we’d have to find our way back from, and all the looking I might do wouldn’t help because they, it, we weren’t even really here. Some sort of spirit wrangling would have to happen, something mysterious that would have to be learned. With all this weighing together, I felt like symbols were combining to make this common shape. Something dark, feminine, powerful, trying to work itself out of some hole, to fight against itself and build up to someplace new.”

And there will always be someplace new to discover in Grouper’s songs. They have a lasting quality that never seems to evoke the same image twice, never seems to allow a listener the same experience as they’ve had before with the same song.

Harris is set to go on tour with Animal Collective soon, thus the anonymity that she has cherished may be forcecd to adapt to wider audiences. However, it can by said with fair certainty that, regardless of the venue, Grouper’s songs will maintain the ethereal quality that has pulled them out of the bedroom and gradually into the limelight. 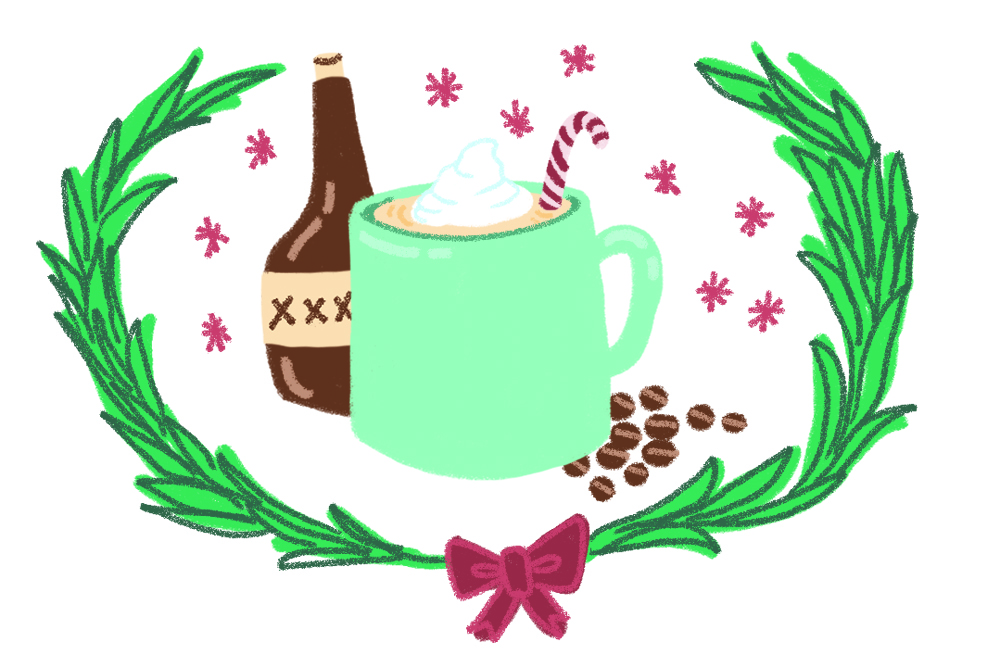 Holiday drinks to get you drunk