A George Washington costume paired with a Native American headdress. Saudi Arabian garb labeled as a “terrorist costume.” An alien mask and orange jumpsuit sold at Target as an “illegal alien” costume.

A George Washington costume paired with a Native American headdress. Saudi Arabian garb labeled as a “terrorist costume.” An alien mask and orange jumpsuit sold at Target as an “illegal alien” costume. 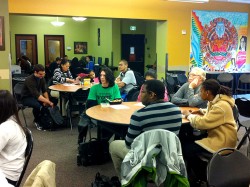 At what point does a Halloween costume cross the line?

That’s what students gathered in the Multicultural Center discussed on Monday, in an event called “My Culture is Not a Costume,” sponsored by PSU’s La Casa Latina and the Multicultural Center. Through Socratic-method discussions and personal storytelling, the small group tackled the viewpoints swirling around Halloween costumes that attempt to depict—in varying degrees of acceptability—another culture.

Some said that a costume worn in the spirit of good fun may not intend to offend a cultural or ethnic group.

“What we have to look at is both intent and effect,” said Cynthia Gomez, director of PSU’s Department of Cultural Centers. “We don’t live in caves—we are constantly interacting with others and have to be aware of that.”

The “My Culture is Not a Costume” campaign was launched at Ohio University last year and has since gone viral across college campuses as students of various ethnic backgrounds have shared their stories.

An Nguyen, who is of Vietnamese heritage, often sees costumes playing on Asian stereotypes. 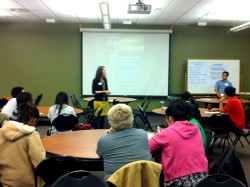 “I see people dressed up as rice paddy workers, or right off a boat,” said Nguyen. “But my family came to the United States by boat and faced extreme hardships. I find that costume offensive.” Costumes that reduce an entire way of life to a caricature can hurt in profound ways, many in the group expressed.

“Growing up, I was taught to respect the Native American headdress. To see it mocked hurts,” said one man.

The issue was placed in historical context—beyond the menagerie of Halloween costumes. “Othering” is not new, explained Emanuel Magaña, director of La Casa Latina. It dates back to minstrel shows where entertainers would don the infamous blackface and act out stereotypes, he said.

Is the popular football game practice of wearing black to intimidate the opposing team, as has been done at Oregon State University, an echo of a racist past? Although some felt such a claim went too far, others brought up a key point: why is a face painted black intimidating? Gomez again stressed the importance of examining both intent and effect; although students may not have racist intentions, their actions can certainly be perceived that way, she explained.

What can educational institutions do in such situations? Students had mixed responses, distinguishing between what they expected of high school students and younger children.

Banning costumes in schools outright, an idea recently floated by an OregonLive.com blogger, would only stifle children’s creativity, some said.

“Let kids be kids. Banning costumes would be another form of oppression,” one woman said. Others disagreed.

“Halloween costumes can, some say, create an exclusionary atmosphere for those who cannot or do not celebrate it,” Gomez said.

Gomez recognized the controversial issue as one that needs to, at the very least, be thoroughly engaged. The sensitivity of Halloween costumes is just one issue that must be addressed through dialogue, she said.

“Stepping outside of our own opinions and into someone else’s shoes is a part of democratic dialogue,” Gomez said. “It’s good for our civic muscles.”