In light of recent violence on campus and ongoing violence nationwide, many students may decide to make themselves aware of resources available to them to help prevent becoming a victim themselves. 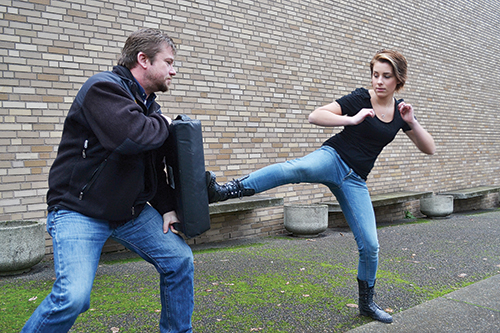 In light of recent violence on campus and ongoing violence nationwide, many students may decide to make themselves aware of resources available to them to help prevent becoming a victim themselves.

At Portland State, students have the option of enrolling in a self-defense class that is offered every term.

Students are even encouraged to take the course more than once to keep self-defense methods fresh.

“Defending yourself is a lifetime effort. You keep adding layers every year,” said Billie Anger, who has been teaching college-level self-defense since the ’70s.

Anger, who has been teaching the course at PSU since the ’90s, views proper self-defense as a lifetime commitment, and said you can always be better prepared.

Topics covered in class range from weapon disabling to identifying body language and the science behind self-defense.

“It’s important, because most people don’t realize they have a self-value until that value is threatened,” Anger said.

She believes recognizing your self-worth and becoming properly equipped to defend it are key to a well-rounded education.

“There is certainly value in self-defense,” he said. “Knowing what your capabilities are and being able to fight are important in protecting your safety.”

• Trust your gut. Often, your body is more aware of your surroundings and the body language of others than you realize.

• When going out to a social event where alcohol is served, travel in groups and designate a leader. Similar to a designated driver, the “leader” is the responsible friend who is put in charge to keep the group safe.

• Pre-program the Campus Public Safety emergency and non-emergency numbers into your phone.

Jessica Amo, director of the Women’s Resource Center, believes informing and empowering students will make the campus a safer environment.

“You [students] can actively engage in the situations going on around you,” she said. “You can make the commitment to safely interrupt situations that could become violent.”

Primary prevention consists of efforts taken to stop violence before it occurs, like becoming an educated student leader. The WRC hosts events throughout the year, like the Sexual Assault Education Theater, that equip students with the skills to become an informed leader.

The secondary prevention step is about recognizing violence when it arises and advocating for those who have been victims of violence. Research has proven that victims of violence are more likely to reach out to a friend than a professional for help. Portland State has abundant resources for students seeking help.

The last step is zknowing what to do after violence has occurred and stopping future violence.

The Center for Student Health and Counseling offers confidential counseling services for students who have been victims of violence, and the WRC is dedicated to raising awareness of campus safety with events like Take Back the Night/Bike Back the Night in April.

“We are really committed to creating a safe and healthy campus,” Amo said. “We encourage any student who has been affected by violence to seek help.”

No leads in ASPSU theft case