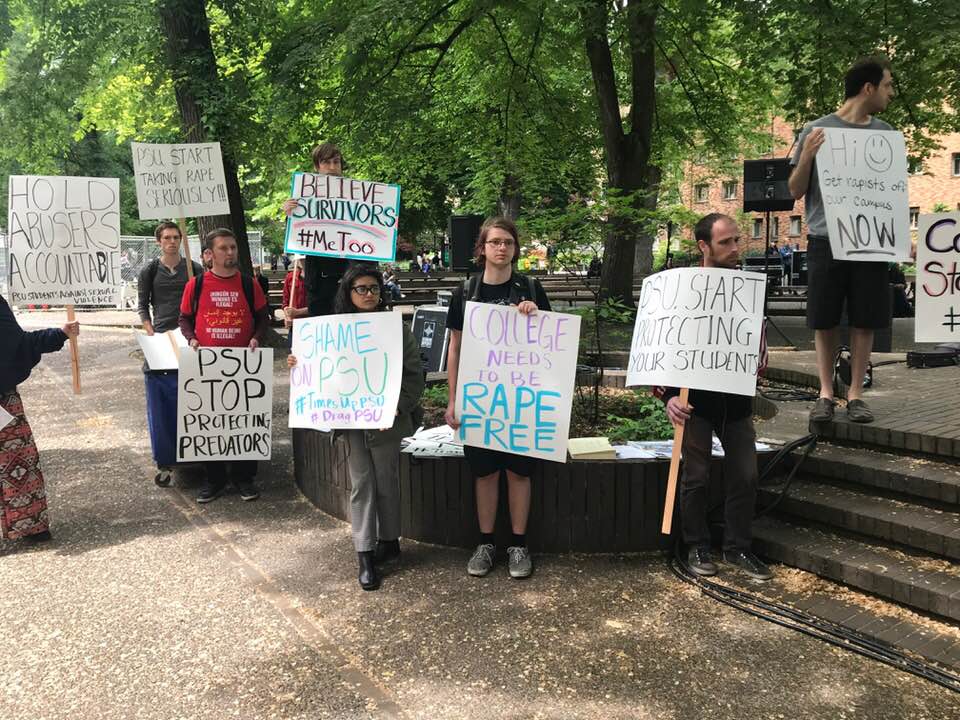 “Rapists don’t deserve diplomas,” chanted a group of approximately 30 demonstrators marching across campus on May 31.

The protestors—primarily members of PSU’s International Socialist Organization and PSU Student Union—were on their way to present university administrators with a petition calling for the expulsion of a student accused of abusing and sexually assaulting multiple women over the period of about 18 months.

Protesters said they gathered over 1,300 signatures from the PSU community in the days preceding their march.

“It is so difficult walking around knowing there’s somebody out there who would be so violent to you and violated you that deeply,” Carter read from her statement. “And then to have this institution know that about this student, yet the survivors who have been silenced and ignored get punishment.”

The march was the culmination of a three-day series of protests organized by PSUSU that criticized the university’s response to the allegations.

PSUSU has accused the administration of failing to protect survivors by not pursuing disciplinary action against the accused student and disciplining students who called the alleged perpetrator out publicly. Three students filed formal complaints with the Office of the Dean of Student Life in January 2018.

“I had a lot of grief in my life [at the time],” Carter said in an interview. “My mom died. One of my very good friends died in a very short space of time. [The accused] completely utilized my vulnerable​ position to be sexually abusive, to spread lies about me [and] to discredit my voice.”

An event organizer who asked to remain unnamed said she knows of at least four individuals who say the accused victimized them. As far as she knows, none of them have filed police reports.

Both Carter and the unnamed organizer are members of PSU’s ISO, a Student Activities and Leadership–recognized student organization connected to a larger parent organization with branches in about 40 cities in the United States.

According to a statement posted on the PSU ISO Facebook page, the accused student was expelled from the organization by the ISO’s National Disciplinary Committee in January 2018 for violating the ISO Members’ Code of Conduct. ISO investigators claim they found a preponderance of evidence to support allegations of sexual violence, sexual assault, emotional manipulation and slander detailed in three separate complaints filed against the accused.

Carter claimed she and two other survivors filed formal complaints with PSU’s Dean of Student Life office in January 2018, alleging the accused student committed acts of sexual misconduct in violation of the university’s Student Code of Conduct. Carter said she and the other survivors were subsequently called in for interviews with Assistant Dean of Student Life and Director of Conduct Dana Walton-Macaulay.

However, nearly five months later, Carter said she has not received any direct communication or follow-up regarding the status of the investigation.

Like almost all public and private universities in the U.S., PSU is required to comply with the provisions of Title IX of the Education Amendments of 1972, a federal law that prohibits discrimination based on sex in educational institutions and programs that receive federal funding. Such institutions are also required to take concrete steps to prevent and address sexual harassment and sexual violence.

According to the U.S. Department of Education Office for Civil Rights, institutions governed by Title IX are required to respond to all instances of sexual misconduct they either know about or could reasonably be expected to know about.

“When sexual misconduct is so severe, persistent or pervasive as to deny or limit a student’s ability to participate in or benefit from the school’s programs or activities,” reads a September 2017 Q&A on Campus Sexual Misconduct, “a hostile environment exists, and the school must respond.”

Event organizers say the accused student’s presence on campus has contributed to a hostile environment for survivors of sexual assault.

“This is really important and really emotional for me,” said PSUSU member Kella Carlson. “Especially to carry everything that I have, all the baggage of my rape and sexual assault with me every day, and to know that I’m attending class at a school and walking around campus at a school that protects serial rapists.”

“It makes me feel very unsafe,” she added. “It’s definitely affected my education.”

Title IX Coordinator Julie Caron said all student conduct investigations, including those regarding sexual misconduct, are headed by Walton-Macaulay.

After receiving a complaint, Caron explained, Walton-Macaulay should conduct initial interviews with all involved parties, including the complainant and the accused—also referred to as the respondent. Based on these interviews, Walton-Macaulay determines whether there is enough evidence to move forward with a full investigation.

Prior to September 2017, guidelines put forth by the DOE required that sexual misconduct investigations be concluded in a prompt and effective manner, generally within 60 days, barring exceptional circumstances. While federally-funded institutions are no longer legally obligated to adhere to any strict time frame, Caron said PSU still uses the so-called 60 day rule as a general guideline.

She said, “We know these matters are stressful for everybody, and the sooner we’re able to complete them the better.”

Whether or not the university decides to pursue a case against the accused, Caron said the complainant will be made aware of the decision in a timely matter and typically in a face-to-face meeting.

Protest organizers, however, have accused PSU administration of violating Title IX as well as institutional procedures for addressing sexual assault violations by failing to discipline the accused student or to update the complainants on the status of the investigation.

“[Contact between Walton-Macaulay] and the [complainants] has been minimal to the point where it’s been made clear that there is no conclusion to the investigation yet,” the unnamed organizer said. “The complainants​ have not had any formal update with how the investigations are going.”

Carter said after the initial interviews, she heard nothing from the DOSL office until March 12—approximately 60 days after complainants filed their initial complaints—when one of the other complainants sent an email to Walton-Macaulay requesting an update.

“My investigation has taken longer than anticipated,” Walton-Macaulay wrote back. “I can tell you that your case will not be moving forward on its own, but I have not formally resolved the case.”

Carter said she and the other complainants found this response unclear and that they have not heard from Walton-Macaulay since.

Dean of Student Life Michele Toppe and Walton-Macaulay—both of whom are currently under investigation for a disability discrimination complaint—were unavailable for comment.

Some protesters have been sanctioned by the university for publicly calling out the accused student during one of his classes. This sanction, the unnamed organizer said, catalyzed the protests.

At 7 p.m. on April 30, a group of eight people arrived at a room in Cramer Hall in which the accused student was attending class. They asked the professor if they could make an announcement. When the instructor told them they could have one minute, the group’s spokesperson requested five. The instructor declined and asked the group to leave. When protesters refused, the instructor called CPSO.

Before CPSO officers showed up at around 7:10 p.m., the group’s spokesperson read a statement accusing the student of multiple counts of sexual assault and abuse.

According to a PSUSU statement, a number of students involved in the public callout were subsequently called into the DOSL office for violations of PSU’s Student Code of Conduct and now face sanctions including disciplinary academic probation, reflection essays and community service.

Despite reports of witnesses being disturbed or triggered by the public callout, participants maintain they made the right choice.

“We called [the accused student] out for the safety of the students in that classroom [and] for the safety of students on campus,” said Carlson, who participated in the callout. “In my opinion, yes, students were triggered, but if we out a rapist so people stay away from him, that’s more important to me.”

“[PSU] cares deeply about the safety of its students​ and the greater PSU community​,” wrote University Communications Director of Media and Public Relations Ken Ma in a statement. “As such, we are committed ​to ​protecting them by meeting our obligations under federal law, including Title IX, to investigate and address allegations of sexual misconduct.”

Ma wrote university officials cannot comment on details of the complainants’ cases because doing so would violate the Family Educational Rights and Privacy Act.

“However, we can share that PSU has investigated every complaint of misconduct—including sexual misconduct—that has been brought to the attention of the university’s Title IX Coordinator, Dean of Student Life or other appropriate university officials,” Ma added. “Our student conduct process is designed to protect students, comply with Title IX and ensure due process for all parties involved.”

Caron added, “Any time we get a report pertaining to sexual misconduct—I don’t like using the cliché that we take it seriously because it doesn’t feel genuine, but I don’t know how else to say that we do—we look into every matter that we receive.”

However, protesters have insisted they want to support more than just those who have accused one student of sexual assault. They hope to provide support for other students on campus who may not feel comfortable reporting their assailants.

“[What] I hope is accomplished through this [campaign] is that survivors and victims of sexual violence on campus know that there is a space for them and that space can accommodate them,” an organizer said. “We’re advocating for a lot more people than we realize.”

Additional reporting by Adam Bruns and David Gillespie. The accused student, who Portland State Vanguard chose not to name, said he would not comment without consulting his lawyer. 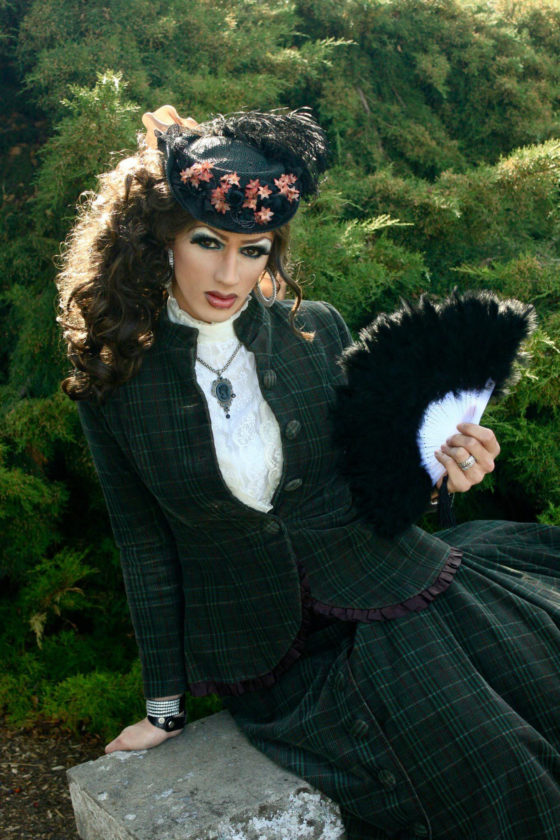 Why are we so unhappy?