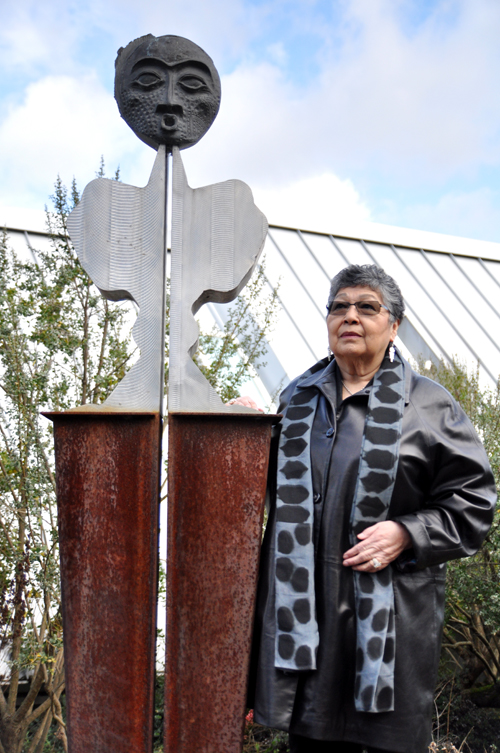 Tomorrow, the PSU Indigenous Studies Department and the Earth and Spirit Council will present Lillian Pitt as part of their Indigenous Speakers series. Titled “The natural way: indigenous voices with Lillian Pitt,” the event will showcase Pitt’s artwork and give her an opportunity to share stories from her life. It will be held at the Native American Student and Community Center.

Tomorrow, the PSU Indigenous Studies Department and the Earth and Spirit Council will present Lillian Pitt as part of their Indigenous Speakers series. Titled “The natural way: indigenous voices with Lillian Pitt,” the event will showcase Pitt’s artwork and give her an opportunity to share stories from her life. It will be held at the Native American Student and Community Center.

“The Indigenous Speakers series invites elders who represent various indigenous cultures from all over the world to speak,” said Larry Hawk, program director of the Earth and Spirit Council. “It was created 20 years ago to address people’s interests and concerns as they draw guidance from people who were raised in traditional indigenous ways.”

Speakers in the series are recorded and their events turned into films, which are donated to community centers, prison facilities and other institutions. The aim is to educate indigenous peoples through the voices of their ancestors. Although Pitt has spoken as part of the Earth and Spirit council before, tomorrow’s event will be her first recorded speech.

“There’s going to be a PowerPoint presentation. I’ll show some art, and I’ll speak about my personal journey in life,” Pitt said. “How my ancestors inspire me to create, how I came to Portland from living in Madras and how I try to give a voice to my people are some things I [will] talk about.”

As indigenous cultures were colonized, a common tool of their oppressors was the forbidding of traditions, artwork and native languages. The purpose of this practice was to sever the bonds that held the cultures together through their heritages, rendering them easier to occupy. It is the connection between cultural traditions and art that Pitt has devoted her life to maintaining.

“My ancestors have lived on the banks of the Columbia River Gorge for over 12,000 years,” Pitt said. “My artwork reaches out to contemporary times, but mostly I want to honor the legends and stories of my people.”

Pitt has largely worked with mixed media and sculpture, but clay, bronze and glass are also among her been mediums. Her work can be found in Northwest parks, museums, personal collections and other public spaces such as the TriMet Metropolitian Greenspace project in downtown Portland, where a 12-foot bronze structure of the sacred being “She Who Watches” stands beside the Interstate Max tracks.

While Pitt’s art will be on view throughout her presentation, the event will focus equally on her speech, Hawk said.

“Lillian is seen as a beloved role model, someone to respect and listen to,” Hawk said. “Indigenous cultures, I believe, are starting to really reconnect with their traditions, their heritage, and Lillian has taken up that role in her community.”

In accordance with Pitt’s cultural practices, the event will be structured in a half-moon circle so that all guests can see and hear the speaker. Nature itself, Hawk said, is comprised of such circles, and part of honoring nature is to imitate it.

“There are certain needs that all people, not just indigenous cultures, should have filled, and one of them is the need to connect with our individual traditions,” Hawk said. “This is not just an event for indigenous peoples, but for everyone that wants to learn something about how where they were connects with where they’re going.”

Some of Pitt’s artwork will be for sale at the event. A $10 to $20 donation is suggested at the door, but no one will be turned away.

“I would love everyone to enjoy themselves,” Pitt said. “I would like people to know about my art, and what it means for both my culture and for anyone who wants to learn about it.”

Is your e-mail safe?

Are civil rights in jeopardy?