Per Henningsgaard’s resume is impressive. Originally from Minnesota, Henningsgaard graduated from Vassar College in upstate New York. He worked at Pearson imprint Longman in New York before going to Western Australia on a Fulbright grant to study print history and culture

Per Henningsgaard’s resume is impressive. Originally from Minnesota, Henningsgaard graduated from Vassar College in upstate New York. He worked at Pearson imprint Longman in New York before going to Western Australia on a Fulbright grant to study print history and culture. 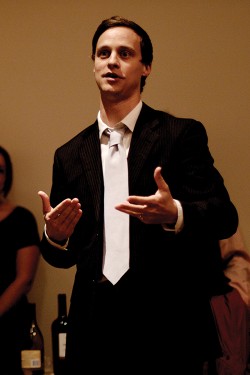 The Aussies, apparently charmed by his genteel Yankee manner and capacious mind, extended him an invitation to pursue his doctoral degree at the University of Western Australia in Perth. From there, Henningsgaard returned to the Midwest to work on the student-run publishing house at the University of Wisconsin at Steven’s Point.

In September, the book publishing graduate program at PSU welcomed Henningsgaard as the replacement for Dennis Stovall, who founded Ooligan Press, the keystone of the publishing program. Last Thursday evening, in front of a small crowd of Ooligan alumni and donors, Stovall praised Henningsgaard’s qualifications and abilities. The event also marked the announcement of a new PSU Kellogg Award: the Dennis Stovall Award.

Prior to the event, I had the opportunity to speak with Henningsgaard about his various interests in the publishing field, as well as the future of print. Here’s what he had to say.

Vanguard: I understand that your background is in print history and culture. I was just wondering if you could talk about how that informs the way you think about books and what that brings to your position here?

Per Henningsgaard: I think the main thing that it offers is the ability to make sure that people who are working to become publishers in the future are well equipped with the knowledge of the past, with the history of publishing, with the history of the book. If they understand that history, then we’re better able to prepare for and predict potentially, the future, because we understand how the book has changed throughout time.

VG: How does the future of print relate to the history of print? Obviously we’re changing mediums, so how is history going to inform that?

So the notion that print is going to disappear five years from now seems kind of ludicrous in light of our knowledge of the history of the book. That would be without precedent—for a new version of the book to totally eclipse the previous one that quickly.

VG: Something I was interested in on the Ooligan site was the way they talk about the art and craft of publishing. Here’s a quote: “The publisher can either enhance the art of writing,” I’m paraphrasing here, “with our own, or diminish its impact if we fail.” I kind of start to get an idea of what they mean by the art and craft of the publisher, editing, graphic design, marketing— putting material into a package, I guess, for lack of a better word. How does that work in electronic media? It seems like that is very diminished, but it sounds like you’re not saying that is the case, necessarily.

I think those markers are very much evolving. Digital markers are in a very kind of elementary state, so they’re basically print books put onto a screen and stripped of any sort of ornamentation. But digital books haven’t begun to develop their own character and their own art and their own craft, and I think that will come with time as people learn more about the technology. The digital book will start to look less and less like its predecessor, the print book.

VG: How does that play out in teaching about publishing?

PH: Right now, for example, I’m teaching a class entitled, “The History and Future of the Book,” and it ties back to what we were talking about earlier: how learning about the history of the book and understanding the full scope of the history can help us better prepare for the future.

When people talk about the history of the book, they oftentimes talk about the printing press, which is absolutely an important moment. A bigger moment, one that has more parallels and resonances to the one we’re going through right now, is the moment we switched from scrolls, reading on a giant scroll, to reading in what’s called a codex, or the form of the book that we know today: pages bound into a spine with a cover. That moment where you transition from scroll to codex, there’s a platform change, the platform of the scroll to the platform of the codex.

And we’re going through a similar platform change right now where the codex, the print book, is changing to a digital platform. So if we look back over this we can see, for example, the really profound influence that that change had on the types of stories that were being told. Stories changed remarkably in tone, in nature, in content, in style.

In part, as a result of the platform shift, I think we’re going to see that same change happen, moving from print books to digital books. Right now our digital books basically mirror our print books but, with time, they will start to develop their own character, their own style, their own tone in taking advantage of the new platform.

PH: It’s actually something that I’ve done a lot of thinking about. Part of my Ph.D. dissertation was on the subject of the publishing of regional literatures, and there are lots of different ways to define regional literature. The message that resonates most for me is to think about regional literature not as a set of characteristics that are distinctive to the region.

Ooligan Press is in the business of publishing literature that’s going to resonate in a really special way with the people of this region. That’s not to say it can’t resonate with people outside of the region, but it’s going
to resonate in a different way.

VG: So it’s quite a bit more subjective.

VG: Something else about the packaging of the book: I looked at the different departments and one of them is called Design and Sustainable Production. Does that mean that environmental sustainability is the underlying ethic of all Ooligan design or does it mean something else entirely?

PH: The department itself, the name, is kind of a strange artifact of the way the press evolved. There was a Design department and then there was an interest in incorporating elements of sustainable production into our publishing model, and without anywhere else to place it, it was lumped in with design. Our designers operate in a kind of traditional design department sense.

Every once in a while we have a book where we put a special interest in sustainable production. It doesn’t, sadly, happen with every one of our books, we’re still trying to work out where that middle is. It’s much more expensive to produce books in a sustainable fashion, which is why most publishers don’t do it. But we try to do one book a year that is produced under a sustainable model and we’ve branded this our “OpenBook series.”

The titles published under this series, they have a logo on them that says “OpenBook,” and they have in their front banner a list of the breakdown of all the sustainable processes that were used in the production of that book: making sure that we choose paper where the forest has been harvested in a sustainable fashion, choosing inks that are safer for the environment, working with printers who have methods to offset the energy costs associated with printing.

That’s a kind of ongoing initiative with Ooligan Press. We are nowhere near being able to do that for all of our books; we’d like to be able to be at the one book a year mark, and we’re working toward building on that.

VG: You’ve said that you want to be able to improve coordination between the departments of English and Ooligan. What do you want to do specifically that will improve that coordination?

Imagine, for example, some of our creative writing faculty teaching a class on editing or working with writers during the editorial process. That hasn’t happened to date, or at least not in a significant way, for a lot of very complicated reasons.

The existence of my position alone is really positive step in that direction. I mentioned earlier that I come from a publishing background, but also having done my Ph.D. That wasn’t the case for the previous director, who was a publisher by trade.

I come in as someone who is able to speak both languages, who not only works in publishing and can do the hands-on stuff but also someone who publishes scholarly journal articles in venues that are common to my colleagues in the English department. So this is the start of building those relationships and ensuring that we’re sharing students and staff across those lines for the benefit of everyone.

VG: You mentioned your predecessor. I was reading an Oregonian article about him recently. I understand that there was a bit of concern that he wasn’t going to be replaced and that it’s been kind of a sigh of relief that they’ve hired you for this position. So I’m wondering if you have any idea what Ooligan has to do to stay around?

PH: I think it’s future is really bright. Because Dennis was not an academic by training, because he did not have a terminal degree like a Ph.D., he wasn’t eligible to participate in the tenure process, which means he was on a fixed term contract—and there is an element of uncertainty to those contracts.

Because I have a Ph.D., I am on the tenure track, and the department’s decision to invest in my position is a very clear signal that they are invested in the program and that there is no reason to think that the program is under any threat at this point.

The climate of change