“Lunch just got even tastier!”

Reading this advertisement, I can’t help but laugh. Just when I thought lunch couldn’t get any tastier, they go and spring something like this on me.

“Lunch just got even tastier!”

Reading this advertisement, I can’t help but laugh. Just when I thought lunch couldn’t get any tastier, they go and spring something like this on me. 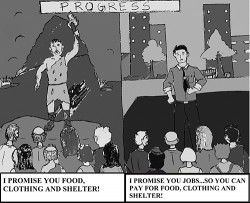 An advertisement gives us a glimpse of everything newer, fresher, faster or tastier, shunning the old and outdated. The first principle of advertising is to make your product appear more valuable than it was before. Making the product appear fresh will catch people’s attention, not to mention their money.

But how much of this progress is a fabrication? When we see an advertisement for a sandwich that says “Now even tastier!” we’re really being duped. That is, isn’t it really just a trick designed to sell sandwiches? I mean, how tasty could a sandwich possibly get?

There are limits to progress, just as there are limits to anything else. It’s easy to say that something has improved. Nobody will be able to catch you in a lie if you claim your sandwich is tastier than ever before.

Our economy designs things to suck, just so that they can keep issuing “new” and “better” versions. It’s much harder to actually achieve a real improvement. We see these same principles of advertising used in politics. Slogans like “Hope,” “Change,” “Forward” and “Progress” become the calling card of politicians of every party during campaigns as a way to sell the candidate to voters.

How far forward can a society go before it starts going backward? If you march long enough in a straight line, you’ll eventually arrive exactly where you started.

What we’re actually moving toward is questionable. Justice or fairness? Once we
arrive there, how will we occupy ourselves? If there’s one thing injustice is good for, it’s making headlines. And headlines make for entertainment. If our country loves anything, it certainly loves its entertainment. The perfect society would be incredibly boring.

Regardless of claims of change and progress, once in office, no politician will succeed on every promise. They’ll have to put up with the demands of Congress, courts blocking the progress of new laws or a lack of funding for what they really want to do. Democracy can be slow and frustrating.

If we really want our government to be fast and effective, we should model it on Hitler. You can’t dispute the effectiveness of a dictator.

Hitler pulled Germany out of an economic depression while consolidating power based on nothing but the word of the Fuhrer.

Former President Franklin D. Roosevelt attempted something similar with the New Deal. But Congress struck it down, and Roosevelt wasn’t able to pack the Supreme Court with justices who’d uphold his policies.

In dictatorships, men don’t shirk their duties as often, especially when in danger of being executed. The moment you introduce a system of fairness, you’re simultaneously affirming a time-consuming system of endless courts and appeals, which takes many years and much money to succeed. This democratic system may be fairer, but it makes change slower.

Our government, rather than being a bastion or vanguard (hah!) of progress, is actually an encumbering cesspool that blocks progress at its every turn. If you really want progress, you should start a revolution.

The slowness and drudgery of American government may be for the best. The trick isn’t so much to destroy the old government and create a new one, but rather to use its own systems to reform the one already in place.

If that is possible, it’s a testament to that government’s effectiveness, and we’ve seen in history that it is possible even if it can be difficult. We can only hope that, in the end, all the drudgery and bickering our government goes through will lead to the best and fairest laws. Maybe this is the real meaning of President Obama’s slogan, and the only “hope” we need is faith that the process serves us when it is most needed.