When I decided to return to school after a couple of decades of making a living, I also decided to move into the city from the ‘burbs. I have never regretted either decision, but both required major changes. These changes were good. I had become far too comfortable out there, and l wanted to be challenged and recharged in an urban environment.

One of the ways I became recharged was to move into a beautiful old apartment building, with hardwood floors (no Berber wall to wall for hearty urban folk), tall domed ceilings, leaded glass, and built-ins that allowed me to get rid of about half of my burdensome furniture. I also had to learn how to live vertically again, after years of flatland existence, and how to cope with having strangers living above me, below me, and on either side. Actually, our close proximity and constant exposure to each other have caused us to come to know each other very well, perhaps even too well. In response, or perhaps in retaliation, I have even given them cute little names.

For example, there’s Conan the Librarian. Conan pays the rent by working at some outfit that stays open at least until three in the morning, which I assume is the library but is more probably a bar. He wears size 15 shoes. He also apparently walks by raising each foot up to the knee level and then exerting pile-driver force at each step. I can always tell when he’s come home safe and sound by the way the pictures dance on my bedroom walls as he passes. He maintains a headphone level on his Walkman that I can actually hear through the foot-thick masonry walls as he passes, which he augments by whistling or singing.

Upstairs we have the Dancing Bears, a very young duo who apparently use tap dancing as a means of creative expression about three times a day. They also have what appear to be speakers the size of the rocks at Stonehenge. I can’t tell you much about their musical taste, because they appear to own only two CDs, but they are very fond of one song in particular with a bass line that sounds like a steam locomotive in heat. Sometimes they play this song five or six times in a row. They are also very consistent in keeping up their dancing skills, and practice so often that they actually shake the light bulbs loose in the overhead fixture in my living room. This Spring Break I had to replace broken light bulbs twice.

They no longer live here, but we did have a couple down the hall devoted to cat racing. They let their 15-pound Persian run up and down the halls in an effort to burn off those midnight crazies to which cats are prone. This was fun for my geriatric kitten, who spent the entire time he lived here with her nose pressed to the front door, catching stray whiffs of Other Cat. This was not fun for those of us who had to spend time daily cleaning cat spit off the door.

Then there’s Nose Boy, whose sniffs in the morning are so loud he serves as an alternative clock radio, and the Laundry Bat, a man who apparently spends most of his time in the relative comfort of the laundry room… at least, that’s where we keep spotting him, eating cold cereal.

Fortunately it’s not summer yet, so we don’t hear much from the Ohmigod couple on Thursdays out the open windows of their bedroom, but we’ll definitely be in for that particular delight soon. Closed windows have also led to hearing less form Ooompah, the marching band music connoisseur. I can hardly wait.

All this may sound as if urban living in an apartment building with a lot of students isn’t fun, but it is. I’ve learned to keep my cool in even the noisiest or least comfortable situations, including having my dining room ceiling drip water when people upstairs forgot to turn off their kitchen sink. I figure it’s not the ‘burbs, with the noise of screaming children and 24-hour lawn mowers, and it has its own charm.

Sorry, have to sign off. The Dancing Bears are shaking the plaster off my ceiling and into the keyboard. 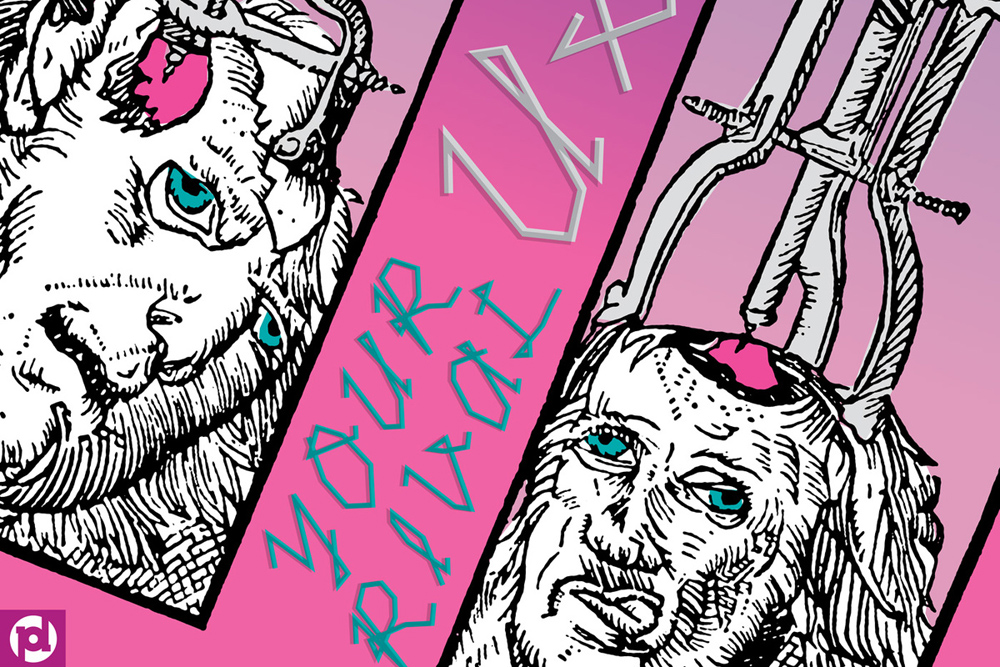