Chuck Palahniuk’s new novel is kind of a letdown. Snuff, besides being crude, explicit and a little bit tasteless??which are not great reasons to dislike a book??is sloppy, annoyingly repetitive and feels half-hearted.

But where does the book’s title come from? As one character puts it, “Ain’t no human body can take a pounding from 600 hard-ons.” It’s a valid point.

As the story moves along, it’s obvious that people expect Cassie to die from making the film. She may even be counting on it. World Whore Three is supposed to make her rich, and she wants to provide for the child she gave up for adoption nearly 20 years earlier, even if she has to die to do it. At least she’ll burn out bright.

The plot is all laid out from the beginning, so until tension starts to build toward the end, when the possibility of Cassie’s death seems imminent, the characters are what drive the story. Palahniuk sets himself up for this, and unfortunately his execution is not as compelling as it could be.

Each chapter features the first-person perspective of a different character. Three of the characters, Mr. 600, Mr. 72 and Mr. 137, are men waiting to have their go at Cassie, and the fourth, Sheila, is a kind of personal assistant to Cassie, and coordinator of the event.

This circular kind of storytelling has its merits and potential, but the characters tend to cover too much of the same ground. Instead of giving the reader new insight into events, the repetitiveness holds the story back rather than moving it along. It feels like space-filler in a 197-page novel that uses a large font and too much creative white space. C’mon, Palahniuk, that’s just lazy!

It’s hard to tell whether the author treats his characters, or the reader, like they are stupid.

Though Palahniuk creates four very unique characters, their voices are practically indistinguishable. In a superficial attempt to vary the different narrations, he gives each character a specific catchphrase. Sheila is always saying “true fact,” and Mr. 600 uses the word “dude” excessively, but it doesn’t make their personalities any more authentic. Palahniuk’s style is so overpowering that every character sounds like a slight variation of the same overly sexed, crude, in-your-face person (i.e. all of his characters, ever).

For all the sloppy, somewhat gimmicky writing, Palahniuk does some signature things well. The gross-out factor is definitely there; though, if you are fan of his work, you are probably dull to it by now. And like always, nothing is what it first seems. Plot twists may be expected, but that doesn’t make them predictable. You can’t guess what’s going on in the warped mind of Chuck Palahniuk.

With that said, the ending is a little weak. The buildup is great??slow and culminating, but it ends too fast, with some rather silly explanations. It’s actually quite shoddy, like he just got tired of writing. It’s an unsatisfying end to an unsatisfying story.

Snuff isn’t Palahniuk’s best work. Even if you’re a fan, don’t waste your time with this book. 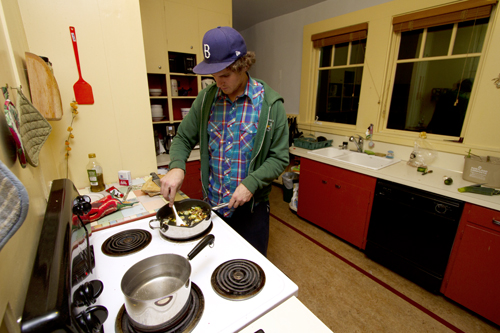 How food stamps changed my diet

Winterhawks come back against Kamloops