The Portland Timbers have truly put on a special performance thus far in their inaugural season as an MLS franchise.

The Portland Timbers have truly put on a special performance thus far in their inaugural season as an MLS franchise. After Saturday’s thrilling 1-0 victory over the Columbus Crew the Timbers remain undefeated at home (where all of their wins have come) and are sitting in three-way tie for second place with a 5-3-2 overall record in the Western Conference standings.

Saturday’s shutout was a true test of endurance early on, as the Timber’s play started out flat. Portland managed only three shots throughout the first half and saw a few moments of panic as Columbus seemed to dominate offensively. The play was physical as the Columbus star players made their presence known early. Forwards Tommy Heinemann and Emilio Renteria were able to get early shots on frame for the Crew, but were unable to capitalize. Renteria has been the weapon for Columbus, scoring four goals so far this season, but he went down early in the first half with an undisclosed injury and did not return.

The loss of the Crew striker did not phase the Columbus play though as they attacked and did not give Portland room to pass freely. Play got chippy as Timbers forward Kenny Cooper was given a yellow card in the 40th minute for a near fight with Crew defender Julius James after trying to get inside positioning in Columbus’ territory. Just before the half, Heinemann was able to slip past Portland defenders and connect with a header from a long pass. The attempt was on target, but was deflected by Timbers goalkeeper Troy Perkins in an acrobatic save.

The near goal gave Columbus the momentum going into the half, despite the 0-0 score. The Timbers clearly needed to come out in the second half with more intensity and they did just that. Only one minute into the half, Timbers midfielder Kalif Alhassan was able to connect on a free-kick by Jorge Perlazza. Alhassan did not have a clear shot on frame, but passed across the goalbox to an open Eric Brunner who was able to head the ball into the back of the net and give Portland a 1-0 advantage.

The single goal of the match, scored by Brunner, meant more than simply taking the lead. As a former Crew defender and Columbus native, Brunner felt he had something to prove to his former team. The impressive play was the Timbers ninth goal from a set piece so far this year. With 44 minutes remaining in regulation, Portland had to scrap to stay ahead. The frantic play continued as the Timbers became confident, taking seven shots in the second half alone. One final attempt at equalizing was taken by the Crew in the 87th minute when midfielder Robbie Rogers’ shot hitting off the far right goalpost, giving Portland a scare just before the whistle blew.

Portland was able to regain control of possession in the closing minutes and hold onto the victory. The win was big not only for former Crew member Eric Brunner, but for a surging and growing Timbers’ team. Keeping their confidence high and taking the winning ways on the road will be huge for Portland down the stretch as they are still looking for their first three-points in an away match.

The Timbers will next host the Dutch league champions Ajax Amsterdam in a friendly at 7 p.m. tomorrow evening. On Sunday, the team will re-enter MLS play at home against D.C. United with kick-off schedule for 2 p.m. ? 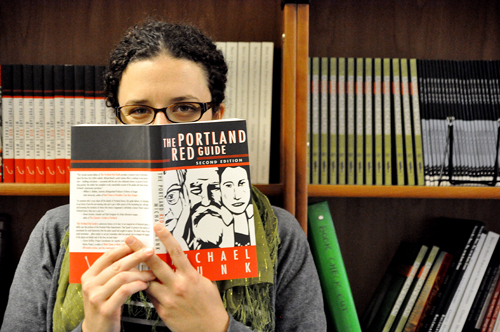 Pushers of the printed word