According to Molalla tradition, when Coyote was creating the world he was challenged by Grizzly Bear near Mount Hood. Coyote won the fight and scattered Grizzly Bear’s remains across the landscape, saying of the tribe, “Now the people will be good hunters.”

According to Molalla tradition, when Coyote was creating the world he was challenged by Grizzly Bear near Mount Hood. Coyote won the fight and scattered Grizzly Bear’s remains across the landscape, saying of the tribe, “Now the people will be good hunters.” 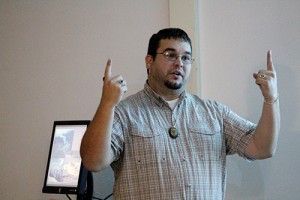 On Thursday, Eirik Thorsgard, tribal historic preservation officer of the Confederated Tribes of the Grand Ronde, spoke to a packed classroom in Cramer Hall about Traditional Cultural Properties and Sacred Sites, often referred to as TCPs.

Native American oral traditions, like the story of Coyote and Grizzly Bear at Mount Hood, play a large role in helping tribes negotiate with the government about whether locations are eligible as TCPs.

When a location is deemed a TCP, it is placed on a national register and receives
federal protection.

“Traditional properties are those that don’t necessarily have a physical presence,” said Virginia Butler, archaeology professor and organizer of the lecture series.

In the negotiating process, government demand for documentation meets Native American oral history. It’s a realm in which cultural misunderstanding can run rampant.

“Culture is fluid; culture changes and adapts to the situation around it,” Thorsgard said.

To help ease the process, the government created Bulletin 38, a document that attempts to define TCPs and acts as a guide in determining a location’s eligibility.

The document is up for review and possible revision. Wednesday was the last day for open commentary from the public.

Thorsgard believes the language in the current version of Bulletin 38 is too broad. In one section it defines a TCP as “a location associated with a Native American group about its origins, its cultural history, or the nature of the world.”

This “anything goes” language can actually work against a tribe because government agencies prefer much more specific information. It leaves tribes guessing as to which information will be considered valid when a petition is up for review.

Much of Thorsgard’s presentation was spent providing specific examples of TCPs associated with the Grand Ronde. Each example illustrated a unique challenge.

One was the Willamette Meteorite, the largest of its kind in North America. Once venerated by local tribes, the rock now sits on display at the American Museum of Natural History in New York City.

In the late 1990s the Grand Ronde tried to get the meteorite back, but the museum threatened to sue.

In a compromise, the museum now allows tribal members to conduct ceremonies around the rock once a year.

In addition, the Grand Ronde community places some of its youth as volunteers in the museum. The knowledge they gain, they bring back and teach the community, Thorsgard explained.

Another example is the Roman Catholic abbey in Mount Angel, Ore., which sits atop a butte overlooking the town. Similar to many colonial churches throughout the Americas, the structures stand on a site once held sacred by Native American tribes.

Before the abbey was built in the late 19th century, the butte contained “prayer seats” formed from rock. Natives had originally built and used them to “talk to God,” Thorsgard said. Many of those stones became part of the foundation of the abbey.

The site raises the issue of cultural continuity. Even if appropriated for Catholic use, the site is still being used for sacred purposes, specifically prayer.

There are members of the Grand Ronde who practice Catholicism, including some who also practice traditional beliefs, seeing no problem with combining them.

As a friend of Thorsgard said, “prayer is prayer.”

The Mount Angel site represents the complexity of the TCP issue at its fullest: It’s a geographical location with archaeological remnants, has been in continual cultural use (even if occupied by different groups), some tribal members are tied to it—both through contemporary and traditional practices—and these practices are at once present on site and off.

Some sites, like Mount Hood, Table Rock or Willamette Falls, are held sacred because of their role as places of myth creation.

In negotiating for federal protection of TCPs, Thorsgard doesn’t get into arguments over empirical evidence.

“It’s what people believe that matters,” he said.

As is often necessary, Thorsgard turns to the ethnographic record, usually written by white “colonizers” to assert native traditions surrounding places and practices.

These can effectively point out that “one of your people” said this about “us,” which can set the precedent for white acknowledgment of native claims, Thorsgard explained.

Senior anthropology major Daniel Walker, who attended the lecture, said the presentation was in direct correlation to what he was studying, and that he was surprised by what he heard.

“It was a slap in the face as an archaeologist—the humanity doesn’t come through in classwork,” he said.

Archaeology First Thursdays are held once a month throughout the school year.

An evening with Mozart