The Vikings volleyball team followed up their impressive sweep of Weber State University on Thursday with an even better encore, beating Idaho State University 3-1 on Saturday to clinch the 2012 Big Sky regular season championship. In front of the second-largest crowd at the Stott Center all season, the Vikings fought past an injury to junior outside hitter Jaklyn Wheeler and a second-set loss to take a dramatic four-set victory on Senior Night.

The Vikings volleyball team followed up their impressive sweep of Weber State University on Thursday with an even better encore, beating Idaho State University 3-1 on Saturday to clinch the 2012 Big Sky regular season championship. In front of the second-largest crowd at the Stott Center all season, the Vikings fought past an injury to junior outside hitter Jaklyn Wheeler and a second-set loss to take a dramatic four-set victory on Senior Night.

Digging deep: After a tough couple of weeks, the PSU volleyball team returned to its winning ways with a dominant sweep of Weber State and a gritty four-set win over Idaho State.

“I’m so proud of our effort and what we did tonight,” head coach Michael Seemann said. “We’ve had some pretty tough losses in the past few weeks, and you can learn a lot from those losses. We learned we have to play as a team. Throughout the year, you’ve seen big numbers here and there, but we’ve always believed we need a total team effort. We got that on Thursday and we got it again tonight.”

The Vikings’ win over Weber State combined with an Eastern Washington University upset of Idaho State on Thursday to make Saturday’s showdown the deciding match for the regular season Big Sky title.

The team benefitted from fine performances by the two seniors honored that night, outside hitter Megan Ellis and setter Dominika Kristinikova. Ellis put the perfect finishing touch on her regular season career at Portland State, coming through with the winning kill in the fourth frame. She led the team with 16 kills overall to go along with 14 digs as she earned her 17th double-double of the season.

Kristinikova provided an anchor in the back row for the Vikings, contributing 13 digs on the night, including multiple crucial saves.

“Megan was a rock tonight,” Seemann said. “She was absolutely solid. I felt like whenever we gave her the ball, it was going to be terminated…Domi came in and made some huge plays. They played like they’ve been here for four years, and they wanted it.”

The Vikings jumped out to an early 7-3 lead in the first set, but the Bengals kept the match close and eventually tied the score at 23-all after an error by Wheeler.

The error was the least of the Vikings’ concerns, however, as the team’s star hitter collided with sophomore libero Kasimira Clark going after on a loose ball and landed wrong on her knee. Wheeler had to be helped off the court and did not return for the remainder of the match, but the Vikings were able to regroup to close out the set 25-23.

Wheeler’s injury resulted in backup outside hitter Cheyne Corrado stepping in to fill the shoes of her teammate.
Corrado had not played more than two sets in a match all season, registering just five kills in Big Sky competition. But she came up big on Saturday, throwing in 14 kills with eight digs, responding to the challenge when the team needed her most.

According to Seeman, Corrado has been working up to this moment for a while. “Cheyne’s had possibly [the] best three weeks of practice of her career,” he said. “The hardest thing to do is to go hard in practice when you don’t necessarily have a starting role. You always are preparing for the ‘what if,’ and for her to come in the way she did was amazing. She played a little tight for two points, and then she relaxed and she did a fantastic job.”

Even after her tremendous performance, Corrado was quick to give credit to her injured teammate.

“[Backing up Wheeler has] been my position all year long,” she said. “I knew that’s where I was. I was always ready. The past few games, I’ve gone in and given her relief and she’s come back in and did great, and this time was the real thing. I felt ready for it and I was happy to do that for my team.”

In a back-and-forth second set, the Bengals managed to finish stronger, winning it 25-21. But the Vikings refused to allow the setback or the injury of their teammate discourage them, pulling together to take the third frame by a score of 25-20. The team came out and took control midway through the fourth set and never looked back. With 1,000-plus fans on their feet at the Stott Center, they held match point at 24-15, but the Bengals made them earn it, forcing three straight points before Ellis’ kill sent the rest of the Viking squad running onto the court to celebrate their Big Sky
victory.

“It was a team effort all the way through,” Corrado said.

The Vikings move on to Greeley, Colo. next week, where they will be the number-one seed in the Big Sky Championship. 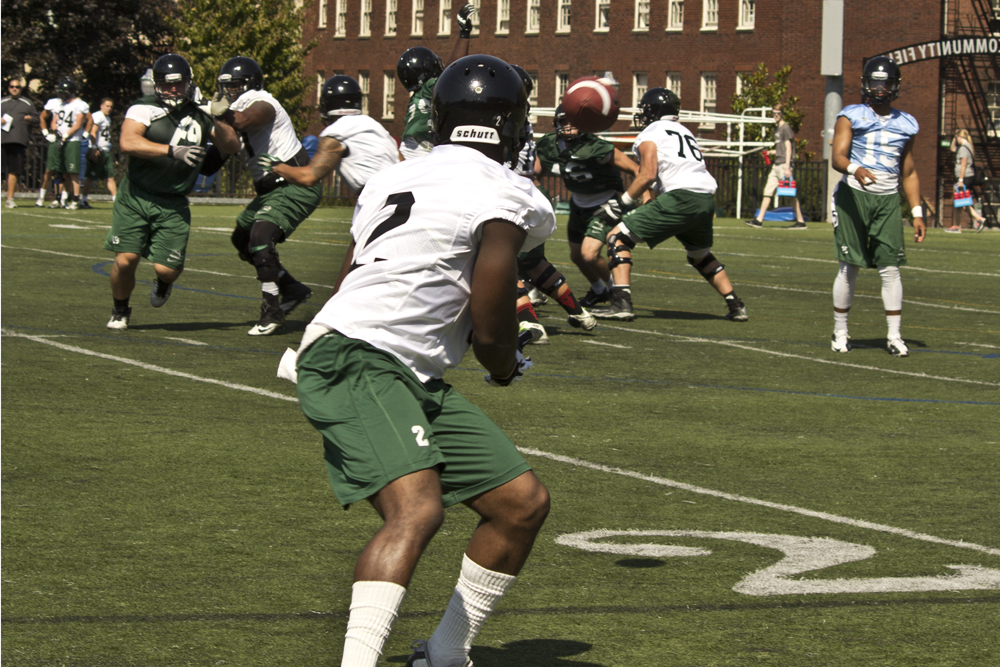 Vikings football looking for a big 2014

Vikings’ season screeches to an end