After enduring nearly a year and a half of campaigning, Portland has elected its new mayor.

Not long after 8 p.m. on Tuesday, as voting in Portland came to an end, it became clear that Charlie Hales had bested candidate Jefferson Smith with 62 percent of the vote.

After enduring nearly a year and a half of campaigning, Portland has elected its new mayor.

Not long after 8 p.m. on Tuesday, as voting in Portland came to an end, it became clear that Charlie Hales had bested candidate Jefferson Smith with 62 percent of the vote. 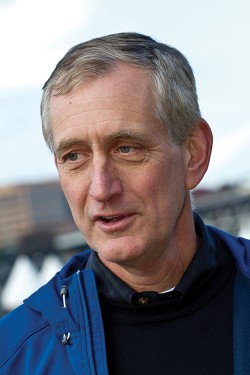 “I am excellent!” Hales answered when asked how his night was, barely audible over the joyous crowd celebrating his win at Southwest Portland’s Holocene bar and music venue. “We obviously ran a great race!”

After pulling in front of Eileen Brady earlier, candidates Jefferson Smith and Charlie Hales had been running a tight race.

In early October, police reports dating back 19 years surfaced, revealing that Smith had hit a girl in the face with a closed fist. Smith, who was a 20-year-old student at the University of Oregon at the time, admitted to striking the then-18-year-old woman.

This new information about Smith, paired with the discovery that his driver’s license had been revoked seven times in the past, led to a distinct decrease in public support.

By Monday, Nov. 29, it was clear that Hales was pulling ahead. The Oregonian released a statement based on their polls revealing that Hales held a 20 percent lead over Smith.

As a city councilor for more than a decade, Hales tackled public transportation by expanding light rail, developing the streetcar and improving bicycle routes.

He was also involved in the renovation and construction of more than 110 Portland parks.

Hales is an advocate for higher education budgets and supports programs that link universities such as Portland State with local schools.

Hales said he felt “very humbled and maybe a little stunned” by the experience of running for mayor, and was quick to express his gratitude for the incredible amount of effort and support he received during his campaign.

Regarding the reelection of President Barack Obama, Hales said he was “so relieved and happy.”

Hales explained that it felt good to have an administration that “supports our whole agenda,” listing livable communities, energy and climate concerns as priorities.

“These topics wouldn’t have been [addressed] if the president hadn’t been reelected,” he said.

Now, with only 60 days before he’s sworn into office, Hales says he has a lot of work ahead of him.

Some of the biggest challenges Hales plans to take on include enhancing public schools and increasing the quality of some East Portland neighborhoods, which he feels have been neglected.

Hales also seeks to create safer neighborhoods by strengthening the relationships between communities and police.

Hales wrapped up by saying that there are some “serious issues awaiting my administration and city counsel,” but said he felt confident and ready to begin his term.

Fast, cheap and out of control