Our financial aid system works out well for the two extremes: Those with absolutely no financial means are able to have their college education paid for largely by federal or state grants, and those with affluent backgrounds are able to pay tuition out-of-pocket.

Our financial aid system works out well for the two extremes: Those with absolutely no financial means are able to have their college education paid for largely by federal or state grants, and those with affluent backgrounds are able to pay tuition out-of-pocket. 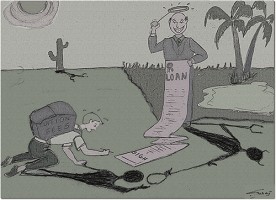 But that leaves the rest of us to fend for ourselves. In the middle—with parents who don’t happen to have an extra $20,000 a year to pay for our schooling, but have enough to make us ineligible for grants—we’re left to either take out loans or not go to school.

If this is you, don’t feel alone. The lot of us have built up a national student loan debt of $1 trillion.

In 2011, the average debt of a Portland State graduate was $26,287. Of those who graduated with a bachelor’s degree, 64 percent did so with debt.

We have two types of student loans: federal loans and private loans from sources such as banks and credit unions. Furthermore, federal student loans can be broken down into two categories: subsidized and unsubsidized.

Subsidized student loans will end up costing the least after graduation, as the U.S. Department of Education pays the interest until you graduate. Currently, the government pays a 3.4 percent interest rate for these loans.

Unsubsidized loans accrue interest while you’re in school at a rate of 6.8 percent. Using the rule of 72, a standard rule for calculating how a loan doubles, it’ll only take 10.6 years from the day you borrow the money for your loan to double the initial principle amount.

Federal loans of either type bear the cross of having fairly low yearly caps. As a freshman, the maximum yearly loan is $5,500, which increases by $1,000 every year you stay in school.

Generally, private loans come with fees that are 3 to 4 percent of the entire loan—equivalent to about an extra 1 percent interest on the overall loan.

We must become an educated society in order to establish a stable and productive economy. This means providing access to education to those of us whose parents aren’t millionaires, or even to those who are college graduates.

Contrary to popular belief, after any losses and administrative costs the federal government still manages to makes a profit from student loans. The system must be reformed to put the needs of the students before investors’ profit margins.

Currently, the maximum available federal loans aren’t enough to cover a full year’s tuition, let alone books, supplies or even living expenses. Increasing or even eliminating the limit on how much a student can borrow in subsidized student loans would alleviate the need to take out private loans.

The amount you owe from student loans will stay with you until they’re paid off. With one rare exception—undue hardship—student loans can’t be discharged through bankruptcy. This policy is completely to the benefit of bankers who make money off of us, and needs to be revised.

The chief solution to reducing student loan debt, however, is reducing how much we have to borrow. Additional funding of the federal work-study program would allow students to earn money rather than having to borrow it.

Earning a college degree is difficult as it is (especially for first-generation college students), but we’re not looking for a handout. What we need is a system set in place to invest in us and put people before profit.