Two days after passing Darrell May for the Winterhawks team record in victories, Mac Carruth was back in net as Portland engineered a come-from-behind 5-2 win over the Spokane Chiefs on Friday at the Rose Garden. Carruth—who has allowed just 1.7 goals per game this season in building a 20-2 record—now has 107 victories over his career in Portland. 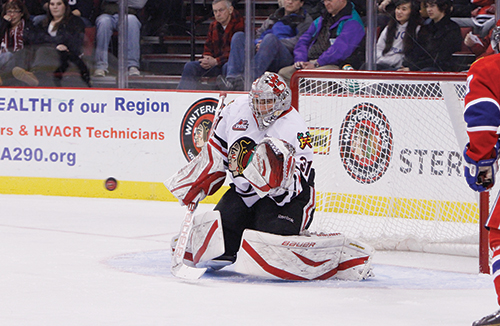 Two days after passing Darrell May for the Winterhawks team record in victories, Mac Carruth was back in net as Portland engineered a come-from-behind 5-2 win over the Spokane Chiefs on Friday at the Rose Garden. Carruth—who has allowed just 1.7 goals per game this season in building a 20-2 record—now has 107 victories over his career in Portland.

“Obviously, it is more of a team thing,” Carruth said of his place in the Portland record books. “To be part of great teams here is a real privilege.”

The Minnesota-born goalie first came to the Winterhawks four years ago, at the age of 17. After starting this year with the Chicago Blackhawks’s AHL affiliate, Carruth returned to Portland early in the season.

“Any athlete’s going to be disappointed when they hear news like that,” Carruth said. “But they told me it wasn’t because of my performance. They wanted me to treat this season like it’s a pro season.”

Carruth split time with Brendan Burke as the Winterhawks extended their winning streak to 14 games over the past week, surviving a stretch of four games in five days to bolster their lead atop the Western Hockey League standings. The team benefitted from the return of American gold-medal defenseman Seth Jones and Canadians Ty Rattie and Tyler Wotherspoon, all of whom had been in the Czech Republic representing their countries at the World Junior Championships.

After allowing seven goals in his last two starts, Brendan Burke stopped all 31 shots that came his way as Portland won 8-0 in Everett on Saturday. Chase De Leo scored the first goal for the Winterhawks seven minutes into the opening period, his second straight game with a goal. Captain Troy Rutkowski scored two goals and added an assist to pace the offense, extending his career-best five-game goal streak in the process. Taylor Leier also had two goals for the Winterhawks.

The victory was Portland’s 14th in a row, just two shy of the franchise record. The team returns to the Rose Garden on Friday to take on the Lethbridge Hurricanes.

Nicolas Petan got things started early in the first period on Friday, scoring his 28th goal of the season off a Ty Rattie rebound to put Portland up 1-0. The Chiefs’ Brenden Kichton then capitalized on a Winterhawks misconduct penalty toward the end of the period to tie the game with a power play goal for Spokane.

Early in the second, the Chiefs scored a go-ahead goal when Todd Fiddler beat Carruth off a Dylan Walchuk assist. After Portland failed to make anything out of several power play opportunities, the Chiefs closed out the period up 2-1.

A bit of good fortune on Chase De Leo’s 10th goal of the season sparked the Winterhawks’ comeback. Wrapping around the net, De Leo looked to pass to a teammate, but the puck caromed off Spokane defenseman Cole Wedman’s skate and beat an unprepared Garret Hughson to level the score.

The teams appeared to be headed to overtime when Wedman took an interference penalty with 5:07 remaining, but Brendan Leipsic struck 13 seconds later on a power play, putting away what would prove to be the game-winner. Presten Kopeck notched an insurance goal just 17 seconds after Leipsic, and Rutkowski added another with 3:15 remaining.

“I think they out-battled us, but we brought our A-game for the third [period],” Rutkowski said. “A winning streak is a winning streak, but you’ve got to look forward to the next game and want to win that one as much as the last one.”