A night of soulful and artful music, dancing and cheap craft beer, all within walking distance of Portland State—and it’s for a great cause? 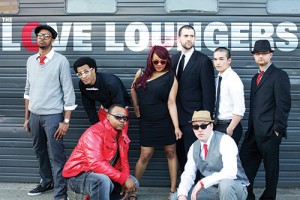 The love loungers kick out the jams to benefit the local Planned Parenthood.

A night of soulful and artful music, dancing and cheap craft beer, all within walking distance of Portland State—and it’s for a great cause?

Next Thursday, Oct. 18, local band The Love Loungers will play a benefit concert for Planned Parenthood, titled “A Night of Love,” at Backspace Café. Doors open at 8 p.m. and the first 50 guests will get goody bags: and, yes, there will be condoms. Pints from local breweries Lompoc and Laurelwood will also be available for $3.

The Love Loungers are a relatively new name to the Portland music scene, but Rose Finn, the band’s public relations and event coordinator, feels that their high-energy show isn’t to be missed.

“I rarely see bands that can get people going, and this band gets people pumped,” Finn said.

The Love Loungers describe themselves as a “band of sharp-dressing 20-somethings [that] deliver high energy, crystal clear, sophisticated, grooving, ‘get up and dance’ hip-hop,” according to the band’s website.

“We are making our own kind of music. It is the next evolution of hip-hop and soul, with the energy of rock ’n’ roll and the youthfulness of punk,” said Ini Akpan, The Love Loungers’ front man. “We are definitely a new style—we call it groove-hop.”

The Love Loungers have placed an emphasis not only on musical innovation, but on being responsible community members. Last year, the band visited local schools to speak with students; they called it “revenge of the band nerds.” Akpan said he wanted students to know that it is “cool to be involved in music.”

“I had this idea to connect [the band] to a bigger cause. They are recording their first album and trying to sort out their identity,” Finn said. “They are all about love—I thought their music was a really good fit.”

Donations raised through events like this are critical to the success of PPCW.

“We provide $2 million worth of uncompensated health care. The only reason we are able to do that is because of the contributions we receive from donors,” said Liz Delapoer, PPCW’s director of marketing and communications. “Our mission is to make sure everyone has access to quality healthcare.”

“I think this is pretty timely, right before an election,” Finn said. “We are looking at a scary future. It is time to stand up.”

The future of print

The road not traveled