“Donnie Darko,” “Zardoz” – Vanguard Pick
5th Ave Cinemas
Through May 15, 7 & 9:30 p.m.
“Zardoz” stars a post-Bond Sean Connery and concerns hisexploits in a socially stratified, pseudo-agrarian society of thefuture. Of course, he ends up still doing lots of Bond stuff likebusting cults of scientists and saving the world, not to mentionputting the moves on some science ladies, but the setting isdifferent and the plot goes a lot deeper. “Donnie Darko” will gracethe second screen and, if you haven’t seen it, this is a greatchance to check it out on the big screen for full visceralimpact.

Slightly Stoopid, Pepper, Mishka
Berbati’s
$15, 21+
Despite their name, which is way more than slightly stupid, andthe fact that they’re lame-o Sublime wannabes, Slightly Stoopidredeem themselves by virtue of their Web site, which features aFlash bong that you can click on, watch it fill with smoke and thensee the smoke magically disappear.

Midtown, Armor For Sleep, Your Enemies Friends, Lance’sHero
Aladdin Theater
6:30 p.m.
$10
Even though they deal in the pop-punk that is all too commonthese days, Midtown is a little more thoughtful and musicallycompetent than most of their contemporaries. That still doesn’tmake up for their bassist’s faux-hawk. That’s justinexcusable.

Rockin Rod, Buttfrenchers
Twilight Cafe
21+
These bands sound gross together. By themselves they’re not sobad, but together they make me think of pervy Ramblin’ Rod, andthat’s not good, especially when it involves frenching butts.Despite the gross-out factor, both these bands are worth everypenny.

Some By Sea
Music Millennium N.W.
12 p.m.
Free
Some By Sea’s Death Cab For Cutie-esque indie pop adds morelayers and makes you dig deeper than the much-lauded DCFC. Thereward is an introspective and melancholy band that plays with theskill behooving a group much older.

Yellow Swans, Nudge, Nice Nice, Noggin, Sharon Cheslow, SuperUnity
Nocturnal
8 p.m.
$5
How to decide between Nice Nice and Point Line Plane, allhappening at the same time? Well, start with the fact that NiceNice is playing with five other good bands for five bucks at theNocturnal and you have a pretty good basis for an informedchoice.
Don Caballero, Point Line Plane
Dante’s
10 p.m.
$10, 21+
Ten dollars? Two bands? Go with Nice Nice. Even though PLP hassome of the best tunes in town, Nice Nice are no slouches and knowhow to shred with a frenetic drums-guitar-effects pedal onslaughtthat overwhelms like TV static. So let their punk-rock ticket pricebe your guide, and let Point Line Plane count their money bags atDante’s all by themselves.

Tarentel, Grails, Steve Von Till
Berbati’s
$7, $8 door, 21+
Moody and majestic, Grails (formerly Laurel Canyon) blend theirslow and somewhat sad guitar dissonance blend with deliberate drumsto form wordless songs that sound like drugs. They are the kind ofdrugs that would make you really depressed and remind you of allthe mistakes you’ve made over the years, but in a good andbittersweet way.

5th Annual UFO Sighting Celebration – Vanguard Pick
Hotel Oregon
This UFO extravaganza features a UFO exhibit hall, a costumeball and an alien abduction workshop, all hosted by genuine UFOexperts. This celebration, held in McMinnville, is the secondlargest of its kind in the country and is likely to attract a cadreof strange and interesting folk. And, honestly, can you really passup a UFO costume ball? That’s something you can’t do every day,unlike seeing The Swords Project, who play all the time.

The Butchies, Davies vs. Dresch, and guests
Meow Meow
9 p.m.
$8
This show is kind of like a Team Dresch reunion, except notreally, since the members are scattered into both the bandsplaying. In any case, expect a full-on punk out from both bands.The Butchies have a little bit of a Beatles streak to them, though,and Davies vs. Dresch have a touch of metal lurking between thechords.

“MC5: A True Testimonial”
Clinton Street Theater
If you missed out on the extensive MC5 documentary when it wasplaying as part of the Jackpot music film festival a couple weeksago, now’s your chance before it disappears forever, thanks toMC5’s rights issues with the filmmakers. Treat yourself to nearlytwo hours of MC5 goodness, and bring the camcorder.

The Thermals, Fuckin’ A CD Release Party, The Schande,Moonpony
Berbati’s
$8, $10 door, 21+
Portland’s darlings, sugary thrashers The Thermals, play riffygood-time punk and roll, with a very heavy dose of pop on top. Forme, I’d rather they punched my teeth down my throat than rottedthem out, but the end result is pretty much the same.

Metal Church, Popewyrm
Dante’s
9 p.m.
$7, $8 door, 21+
Don’t get too excited, I don’t think this band is Aberdonianspeed-metal kings Metal Church, but some other band by the samename. Regardless of their talent, the fact that they copped MetalChurch’s name is really not very cool at all.

Cool Nutz Presents His Wide World of Talent
Berbati’s
$5, 21+
Portland’s own Cool Nutz hosts an open mic/talent showcasenight, sure to attract aspiring local MCs of all levels of talent,which provides you with not only musical entertainment but alsofodder for your drunken late night dis sessions afterwards.

John Mayall & the Bluesbreakers – Vanguard Pick
Aladdin Theater
7 p.m.
$20, $22 door
John Mayall’s seminal blues band, birthed during the Britishblues revival of the late ’60s, manages to stay together andcontinue releasing music, even considering the transitory nature ofmany of its high profile members. Many of the blues-rock musiciansof the late ’60s and ’70s cut their teeth with the Bluesbreakers,including Eric Clapton, Peter Green, John McVie and Mick Fleetwood,(who went on to form Fleetwood Mac) and Andy Fraser (who became thefounding member of Free). Seeing this concert should be worthhistory credits, but it’s not, so just go to see some hard-coreblues.

“39 Steps”
Cafe Nola, 8638 N. Lombard St.
Come see one of Alfred Hitchcock’s classics in the hiddenCaf� Nola theater. They serve a variety of food, dessertsand coffee drinks to enjoy while you take in the movie, andsometimes there’s a little bit of live music to start the eveningoff right. 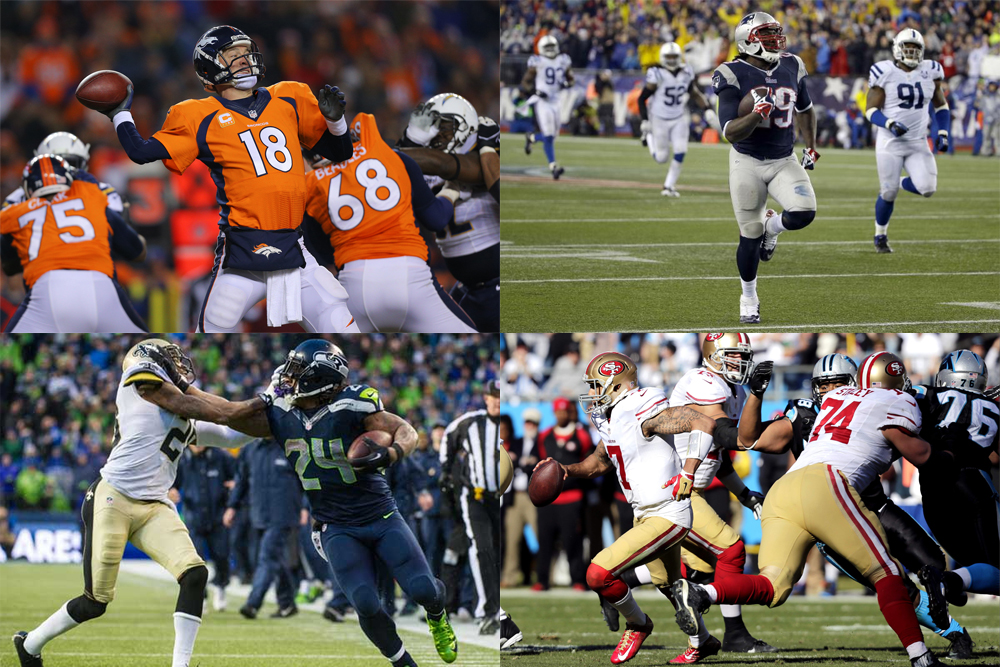 NFL Heads to Championship Weekend With Top Four in Tow