There is an air of slightly nervous anticipation in a North Seattle second-floor apartment on a recent Saturday evening. The “girls’ night in” is just getting started: a flurry of doorbells, debate over where to place candles, wine corks popping, Coach handbags piling up in the bedroom.

No one is talking about – or even looking at, really – the table displayed prominently next to the fish tank, the one that holds not guacamole and candy conversation hearts but lotions, tubes and various battery-operated adult toys. There is a moment of pandemonium when the hostess’s cat, a chubby black-and-white longhair named Turbo, runs off with a red-tasseled whip.

Then it’s time to get this party started.

The special guest is Cecile Miller – wife, mother of two, classroom volunteer in a tiny suburb.

Someone closes the blinds. The giggling begins. Miller launches into her spiel: “Welcome to Pure Romance Parties by Cecile.”

Known as a nationwide “girlfriend network,” this fast-growing, in-home party sales industry hawks “relationship-enhancement products” in the manner of Tupperware. Pure Romance, which employs 4,000 sales representatives like Miller across the country, started a decade ago in Ohio and moved into the Northwest last year. The company logged more than $30 million in sales in 2003.

“It’s a great business to be in right now,” said Susan Clark, who works for a rival company, San Francisco-based Passion Parties. “When I started out, I’d be doing two parties a month. Now, I’ve been booked every weekend and a lot of weekdays since October.”

Passion Parties, with 3,000 consultants in the United States and Canada, gained notoriety recently when one of its sales reps was arrested on a misdemeanor obscenity charge in Burleson, Texas. The 43-year-old woman’s attorney claims she got in trouble not because she sold the items, but because she explained how to use them.

That story made headlines, but the once-taboo subject of sex has become mainstream enough that TV commercials for personal lubricants air regularly in prime time.

“I think the stigma has gotten to be a lot less in the past few years,” said Rachel Venning, co-founder of Seattle’s Toys in Babeland store, which just started offering an in-home party service. “It’s the zeitgeist. There’s `The Vagina Monologues,’ `Sex and the City,’ women’s magazines. … Women really expect to get pleasure from sex now in a way that older generations didn’t.”

The formerly male-dominated sex industry has responded by making products that appeal to women and couples instead of catering solely to men’s fantasies.

At the Pure Romance party in North Seattle, Miller passes around a jar for the group to sample: “OK, ladies, this is a sniffer, not a licker.” The women alternately lick, sniff and blow on their wrists dabbed with creams and glitter gels – this one to make the skin tingle, that one scented with pheromones. “Do they sell this at Costco?” someone quips.

“We have one foot in the adult industry and one foot out,” said Chris Cicchinelli, vice president of Pure Romance. “We give women an outlet to shop that’s not in a seedy bookstore. They can be educated and entertained at the same time.”

Cicchinelli’s mother, Patty Brisben, founded Pure Romance in 1993 in Cincinnati, Ohio, with two employees. When she started in the industry as a sales representative 10 years earlier, “the only thing she knew was K-Y Jelly,” Cicchinelli said. “She had been taught it was seedy and dirty, and you don’t talk about it.”

Clark, who started throwing Passion Parties in Washington in 2001, emphasizes that the demonstrations are educational and tasteful. Ordering is confidential and takes place after her hour-long presentation on a one-on-one basis. Clark earns commission from her own sales as well as from the 160 women she’s signed up to sell in Washington; she cleared about $41,000 total in 2003.

Nationally, Pure Romance experienced a surge after Sept. 11, 2001, when “everyone started re-evaluating their relationships,” Cicchinelli said. The company saw a 57 percent increase in sales in 2003. 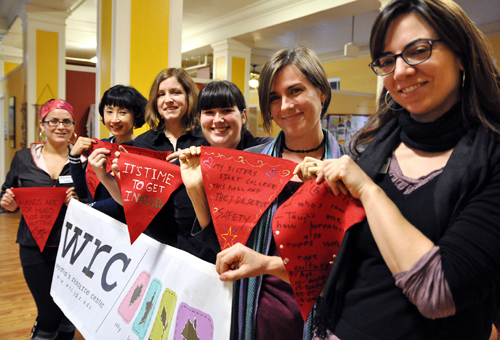 Reaching out to victims of domestic violence

Solis to play for Mexico