Report says majors in arts and humanities are ‘career-killers’

Not all college majors are created equal. So says the Washington, D.C.-based business forecast publisher and personal finance advice company Kiplinger. Based on its research of the employment rates of graduates, it has identified the top 10 majors least likely to get you a job.

Not all college majors are created equal. So says the Washington, D.C.-based business forecast publisher and personal finance advice company Kiplinger. Based on its research of the employment rates of graduates, it has identified the top 10 majors least likely to get you a job. 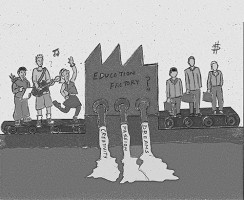 Kiplinger’s report states: “Considering the time and expense that goes into earning a college degree, knowing whether your course of study is a career-killer is powerful knowledge indeed.”

There was a time when going to school was about pursuing your passions, about what excited and motivated you, about what you could see yourself doing for years to come. Yes, the hope of getting a job was always part of the equation, but it was more than that. It was about your dreams, too.

According to Kiplinger, you can dream all you want, but what you really need to know is how lucrative that dream is. Then you can decide whether it’s worth it or not.

So, what are the worst majors? They probably won’t come as much of a surprise. Graduates that pursued fine arts, film, photography, philosophy, liberal arts, theatre, anthropology and English showed the lowest median earnings and highest unemployment rates.

We’ve always known there’s not a lot of money in making art—cliches about starving artists abound. Despite this, over the ages, millions of people worldwide have committed their lives to creating and sharing art with society, and we are intensely richer for it.

What’s terrifying is that a whole new generation of college hopefuls are getting a loud-and-clear message: Their first thought should be that of a pragmatist, not an artist. They need to know that they’ll potentially kill their career by doing what they love. What sort of an introduction to higher learning is that?

It’s not just about college students, however. As French painter Edgar Degas once said, “Art is not what you see, but what you make others see.” Artists have a unique voice and role in society; their creative work often points our eyes to see injustices cloaked behind logic, and they touch us at the deepest core of our being, activating us to engage our own creativity. The idea that their voices would be drowned out by considerations of expectant salary is alarming—for us all.

College is supposed to be about learning, broadening your horizons, widening your imagination and stretching your ideas about life. Is it naive to think that school can be more about your dreams than about what job you’ll get?
I was beginning to think it might be. Until I heard Dallas Clayton’s story.

You may have seen the Google commercial about him. He’s your average, slightly eccentric kinda guy—he named his son Audio Science—with a passion for writing. He spent years distributing his zines on street corners and one day had the idea to write a book for his son. The theme of An Awesome Book! was “having powerful, fantastic dreams.”
No publisher would give him the time of day.

He decided to self-publish. After he posted the book online for free, it didn’t take much time for people to take notice and, in turn, share it with others; soon his little book had worldwide attention. As of today, it’s sold more than 50,000 copies.

An excerpt from his book reads:

“Yes, there are places in the world where dreams are almost dead.
So please my child do keep in mind before you go to bed
To dream a dream as big as big could ever dream to be
Then dream a dream ten times as big
As that one dream you see
Then once you’ve got that dream in mind
Please dream a million more
And not a million quiet dreams
A million dreams that roar.”

If Clayton had spent all his time wondering what line of study would bring him the highest salary and the best job possible, I doubt this book would exist.

Of course, having Google pick up on your idea helps, but somehow I think, famous or not, Clayton would thumb his nose at top 10 lists and instead tell you to write down every dream you ever dreamt and the ones you’ve not dared to dream and start pursuing those.

PSU’s bursting at the seams