This summer, 14 Portland State students and two professors traveled to the state of Solola, Guatemala as part of the study-abroad program 퀌�Connecting Educational Communities.퀌� The students퀌_ goal was to connect two different communities and to become engage d in the very different culture surrounding them.

Every morning the students rose at 5 a.m. to travel an hour and a half in the back of a pick-up truck to a small village where three schools enlisted their aid. There they assisted in rebuilding and painting, and teaching the students English.

퀌�I went there not knowing what to expect,퀌� said Kelly Quakenbush, a senior majoring in International Studies. 퀌�Its one thing to read about it, and another to see it.퀌�

Guatemala is plagued with many social and economic problems while it attempts to recover from a civil war that lasted 36 years, finally ending in 1996.

The students in the three schools ranged from kindergarteners to sixth-graders. Kelly said that the first- and second-graders only spoke their indigenous language and were still learning Spanish. She found that teaching these children English was a challenge but felt they had a great spirit of perseverance.

Robert Sanders, associate professor of Spanish, also went along for the trip. Sanders had previously traveled to rich and poor parts of Latin America, yet he felt this trip put him back in touch with the palpable difference of economic class and poverty in this part of the world.

퀌�It made me appreciate the value of material things in our lives,퀌� he said.

Sanders퀌_ specialized knowledge of Spanish helped him better communicate with the kids. He was able to lead discussions and help teach. He also watched the PSU students flourish as they worked with the Guatemalan children.

퀌�The one thing that makes the students want to go back is the kids,퀌� he said.

The woman behind this program is Manya Wubbold, a professor of Spanish. Wubbold had the idea of bringing two communities together, but she didn퀌_t know where to start.

퀌�I had to stay with the mission of education,퀌� she said.

Several years ago, Wubbold worked with street children in a Guatemalan city. While there, she made several lasting relationships with people who had the same goals as her. After getting her job at Portland State, she collaborated with them to design this program and then recruited Robert Sanders and 14 students to accomplish her mission.

Wubbold believes her biggest challenge was 퀌�balancing being responsible for the Portland State students and the needs of the community.퀌�

Everyone in the program worked to raise enough money to install a water-purifying system in the village that would last four years. They also brought with them an entire truckload of school supplies that people had donated back in Portland.

Wubbold has created this exchange as a continuing program and is now trying to raise money for five of the Guatemalan teachers to come to Portland. The teachers will arrive in December for two weeks and shadow three Portland public school teachers. Then, over the summer, these Portland teachers will have the opportunity to teach in Guatemala, thus achieving Wubbold퀌_s goal of connecting communities through education.

Wubbold hopes to get even more school supplies to bring with her next summer and is accepting any donations throughout the year. She will also be holding an upcoming auction to raise money for the Guatemalan teachers to come to Portland.

To donate supplies, learn more about the auction or travel with next summer퀌_s exchange, contact Wubbold at 503-725-9589 or at [email protected] 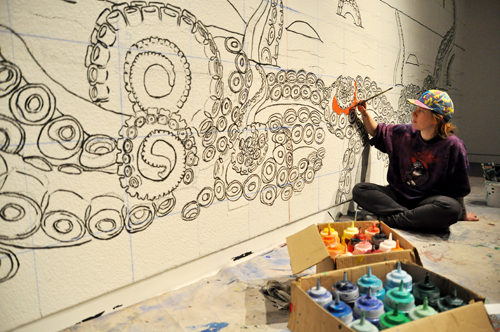 Wrestling with the future