Like little green bees, Oxfam representatives congregate on the Portland State campus and swarm around students, asking for donations to support aid for a South African famine. Of the many clipboard-wielding charitable organizations begging for your money, Oxfam is perhaps the most noticeable.

Oxfam consists of 15 different organizations working in 98 countries “with partners and allies around the world to find lasting solutions to poverty and injustice,” according to oxfam.org Oxfam stresses that respect for human rights is the key to lifting poverty.

Like little green bees, Oxfam representatives congregate on the Portland State campus and swarm around students, asking for donations to support aid for a South African famine. Of the many clipboard-wielding charitable organizations begging for your money, Oxfam is perhaps the most noticeable.

Oxfam consists of 15 different organizations working in 98 countries “with partners and allies around the world to find lasting solutions to poverty and injustice,” according to oxfam.org Oxfam stresses that respect for human rights is the key to lifting poverty.

Although Oxfam does have various financial partners, the funds to pay for all of this aid (clean water is expensive, after all) are raised mostly through donations.

This is where the campus representatives come in. These representatives walk around campus, stand on street corners, hang out around the PSU Urban Center and congregate at various other high-volume locations around Portland.

When they approach students, representatives start off by saying something along the lines of, “Are you aware that there is currently a famine going on in [insert third world country here]?”

This is followed by a plea for donations, some facts and statistics, another plea for donations and an: “Even 10 dollars a month is enough to pay for [various humanitarian aid].” That last statement serves as way for them to tug at the heartstrings of students and non-students alike.

While Oxfam, like so many other nonprofit organizations, does good work in order to help those who suffer from extreme poverty, it is also a corporation and participates in corporate activities.

According to charitynavigator.org, a charity review organization, for every dollar that Oxfam raises, it spends twelve cents on its projects. This expenditure puts Oxfam in Charity Navigator’s 7.5 (on a scale of 0 to 10) range. Oxfam is a pretty great charity for all intents and purposes, but there was one thing it failed to do during its last review.

Oxfam currently has no policy that establishes the handling, backing up, archiving or destruction of documents. A policy like this, called a records retention and destruction policy, aids in good record keeping as well as data integrity.

Earlier this year, Oxfam suffered through two scandals involving fraud. The first resulted in the resignation of Haiti director, Roland Van Hauwermeiren, who resigned because he was in charge while allegations of misconduct against some of [Oxfam’s] staff took place. The allegations were from an audit done conducted by global professional-services firm PricewaterhouseCoopers, which Oxfam hired earlier this year after it found financial irregularities in its flood relief efforts in Pakistan.

The Pakistan scandal involved falsified invoices that manipulated and diverted relief funds in two different projects managed by a Pakistani agency working with the charity. The culprit was eventually fired and Oxfam cut all financial ties with the agency.

In an interview with the The Telegraph, Neva Khan, Oxfam country director in Pakistan, said Oxfam was committed to recovering every cent that was lost and directing all donations to the people who need it most.

“Oxfam has a zero-tolerance policy towards corruption and we, and all our partners, share a commitment to high legal, ethical and moral standards,” Khan said. “Corruption is never acceptable. It literally takes away food from peoples’ mouths; takes away clean water to give them life; and takes money away that could provide people with better hygiene and shelter.”

Going off Khan’s statement, it would appear that Oxfam’s heart is in the right place.

Despite its noble intentions, Oxfam would benefit from crafting a records retention and destruction policy in order to avoid future fraud and scandal.

The organization seems to be fighting the good fight. Ending world hunger, bringing in equal gender justice, climate change, education and all of the other things that Oxfam is fighting for are wonderful. In a perfect world, everyone would be able to help them out in their humanitarian endeavors.

Having said that: calm the hell down, Oxfam.

When you’re already running late to class, the last thing you want is some self-righteous do gooder attempting to make you feel even worse about your financial situation (whatever it may be) and inability to help those less fortunate than you.

The representatives present on campus are all Portland State students themselves and while it is their job to gather donations, they have no business making the rest of us feel worse than we already do about not having the funds to help those in need.

Like the majority of college students in the U.S., I have a good amount of debt to pay back after college thanks to student loans (hooray for capitalism!). I don’t have the means to donate money to relief work and honestly, I think the U.S. needs to put a bigger focus on the poverty in our own country. If we can’t even feed our own citizens, how are we going to make a bigger impact on other countries? According to the USDA, 15 percent of the country is enrolled in the Supplemental Nutritional Assistance Program (i.e., food stamps), a 31 percent jump from June 2009.

With statistics like these, it is no wonder college students and non-students alike can’t necessarily find it within their means to donate to charities like Oxfam. Seeing as most students are unable to donate money to charities, there are other ways to help those in need that do not involve your wallet.

Volunteer at a local homeless shelter or food bank. Turn a hobby into a way to raise funds (a la Toms Shoes or those crazy knitting kids). Educate yourself—just do something!

Because honestly, doing anything helps. 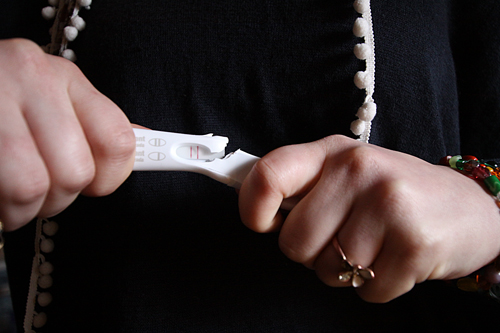 Crisis Pregnancy Centers? Not On My Watch