Portland State’s Japanese Student Society hosts its biggest event of the year, Japan Night, Tuesday, Nov. 22. The entirely student-run celebration of Japanese culture will include dinner and performances throughout the evening.

“Japan Night is a yearly event, and it’s the biggest event JSS puts on,” said Akira Hasegawa, one of the lead organizers of the celebration. “It brings the Japanese culture to the public and makes it more accessible.”

Portland State’s Japanese Student Society hosts its biggest event of the year, Japan Night, Tuesday, Nov. 22. The entirely student-run celebration of Japanese culture will include dinner and performances throughout the evening.

“Japan Night is a yearly event, and it’s the biggest event JSS puts on,” said Akira Hasegawa, one of the lead organizers of the celebration. “It brings the Japanese culture to the public and makes it more accessible.”

Hasegawa has been a member of the Japanese Student Society since fall 2010 and has been deeply involved in fundraising for Japan Night. He anticipates that the event will benefit the society and the causes it supports.

“The Japan Night theme this year is hope. It’s been awhile since the huge earthquake in Japan, and people have started forgetting how bad the situation is,” Hasegawa said. “So the hope is for recovery and for the people who still continue to suffer from the disaster.”

The event itself is expensive to put on—costing nearly $5,000—and because the Japanese Student Society is not funded by PSU, raising money year-round is crucial to its success.

“This event is really quite expensive. I put on a lot of fundraisers, and pretty much all of the money goes back into Japan Night,” Hasegawa said. “But it’s more of a giant celebration than a fundraiser.”

Japan Night is by far the most popular of these events.

Every year, nearly 100 student volunteers, both American and international, gather to put on a Japanese cultural show that includes dinner, live music, dance performances and more.

“This family-friendly event has more than 500 guests annually and always sells out,” said Kristen Kohashi, the event’s Design Committee leader. “It’s not only exciting for guests but also for club members. It’s a great opportunity to get involved, make new friends, learn new skills and acquire experience that can later be used for job hunting and other opportunities in life.”

Kohashi, who has been a part of the Japanese Student Society since 2009, has served as public relations officer and secretary of the club.

“I love how Japan Night brings people together. People from all different majors, countries and backgrounds come together to put on a show that hundreds of people enjoy,” Kohashi said. “It’s a lot of work, but everyone always comes out of Japan Night with great new friends and memories.”

The Japanese Student Society is open to Portland State students. The only requirements include registering at orgsync.com, joining the group’s Facebook page to receive announcements and updates, and attending as many society meetings as possible.

“I probably wouldn’t be the person I am today if I hadn’t joined JSS. It means a lot to me,” Kohashi said.

This year’s Japan Night is split into two sections: dinner and the show. Dinner will feature Japanese foods, and the show will be comprised of traditional and contemporary performances.

Taiko is a form of traditional Japanese drumming and will be presented by a local professional ensemble, Takohachi. Likewise, koto is a traditional Japanese instrument that has 13 strings that are plucked like a harp or guitar. Kyogen, traditional comedic plays, are being organized and performed by students and PSU professor Larry Kominz.

Kominz teaches Japanese theatre performance classes during the spring and summer, and he works with students on traditional kyogen and kabuki throughout the year. He is most excited for his performance with sophomore Aimee Zink, who is also a vanguard staff writer in the comedy The Mountain Wizard and the Persimmons, which will be shown at Japan Night.

“It’s a short, 15-minute piece during the variety show portion. It’s going to be fun,” Kominz said. “I’m really excited for Aimee [Zink], who is the lead role in the play and has several solo parts. This is her third kyogen play since coming to PSU, and I know she’ll be great.”

Along with the kyogen and musical performances, one of the most popular items of the night is the fashion show, in which students dress up in many styles of Japanese outfits.

“Japan is such a high-fashion hub, what with Harajuku style and such. There’s that kind of fashion, and then the uniforms worn by middle and high school kids, which are a lot of fun,” Kominz said. “My wife is helping out, and she’s a traditional kimono dresser, so there will be traditional outfits too.”

During the festivities there will be a PowerPoint presentation for Hope Japan, an organization of women engaged in a relief project for Fukushima and Miyagi Prefecture evacuees. The slide show will include information on ways to get involved with the relief effort.

“I’m so impressed by the students,” Kominz said. “They have a sense of responsibility to help the people after the tsunami and subsequent disasters and preserve the culture.” 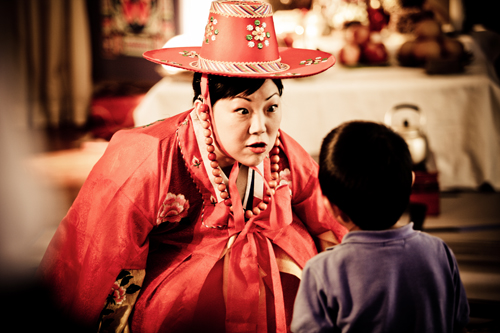 Make room for The Other Guys