The closing days of Portland State of Mind’s celebration of knowledge and culture get to the heart of the Portland State community with “Intersections: An Evening of Storytelling about Identity, Culture, Community and Pride.”

PSOM is an annual event in conjunction with PSU and the Portland community. It began as an alumni weekend and has transformed into a 10-day festival that includes alumni and community speakers, PSU sports celebration and games, music, debate and various other fun and community-building activities put on by both alumni and students.

Five PSU Students, staff and community members told deeply personal stories of obstacles and triumph in their lives. Collectively they shared challenge, hardship, love and hope in a night of inspiration and gratitude for life.

The night was translated into sign language and began with a prelude by community advocate Neola Young, about the complexity of human beings and the need to peel back the layers to get to know why we are the way we are.

“If we don’t tell our stories to people, how can we expect anyone to understand us?” said Darcy Kramer of PSU’s Disability Resource Center. “If you want acceptance, and want people to be more open, you have to tell your story.”

Kramer fought through years of vertigo until she had her left VIII cranial nerve in her brain cut. The nerve conducts balance and auditory information from the inner ear to the brain. She also spoke of being asexual, asocial, aromantic and happily herself.

“Something that I want everyone in here to think about is: What you see here is the cover of the book,” Kramer said, motioning to her body. “There’s thousands of pages in every person’s book that you can’t see looking at the spine.”

“I wanted to come and speak here because I feel like through storytelling you can connect to people, and build community off that and create understanding,” said Arianna Warner, a PSU graduate student speaker. “Too often I think people make judgments based off of what they see or what they hear about someone, as opposed to really getting to know that person. So I really wanted to be able to share my story, all my pages if you will, because that’s how we start talking about these things.”

Warner spoke of both her challenges of being biracial, and of dealing with a rare nerve problem without a cure, in which her nerves tell her to feel pain where there shouldn’t be any. After multiple surgeries on her spinal cord, doctors prescribing drugs and more than 50 doctor-induced comas, she now deals with the pain through diet, mindfulness of her body, forcing her brain to ignore it—and generally choosing to enjoy life rather than feel bad for herself.

The storytellers met and practiced their stories before the event, and worked with a storytelling coach Ryan Stroud. The level of detail in each story showed this.

“He really helped us unpack our stories [and] paint a picture,” Warner said.

Another speaker, Deyalo, talked about coming out as bisexual to his fraternity brothers, and the positive response that came from the intersecting of his personal and school life.

One of the event’s organizers, Jen Dugger, spoke of going to the doctor with her transgender partner and finding out she would be able to carry his baby. A realization came in the in vitro fertilization office—it was a transgender man and lesbian woman who were the privileged ones.

Casey Skoog spoke of overcoming learning and social challenges, and being one year away from a master’s degree with a great GPA. She said, in order to do it, she had to rewrite the negative narrative that her life had been progressing on.

“I don’t really like the term ‘fearless’ for PSU,” Skoog said, “because it implies courage, which doesn’t truly exist without fear. Courage requires confronting fear and we’ve been doing that. I was confronting my biggest fear tonight—stage fright.”

If there was one takeaway from the night, it was that we all have challenges, some greater than others, but it takes the same will to overcome them for everyone. In the speakers sharing their lives with us, we can see it is in the intersections of our stories that we may offer strength to one another. 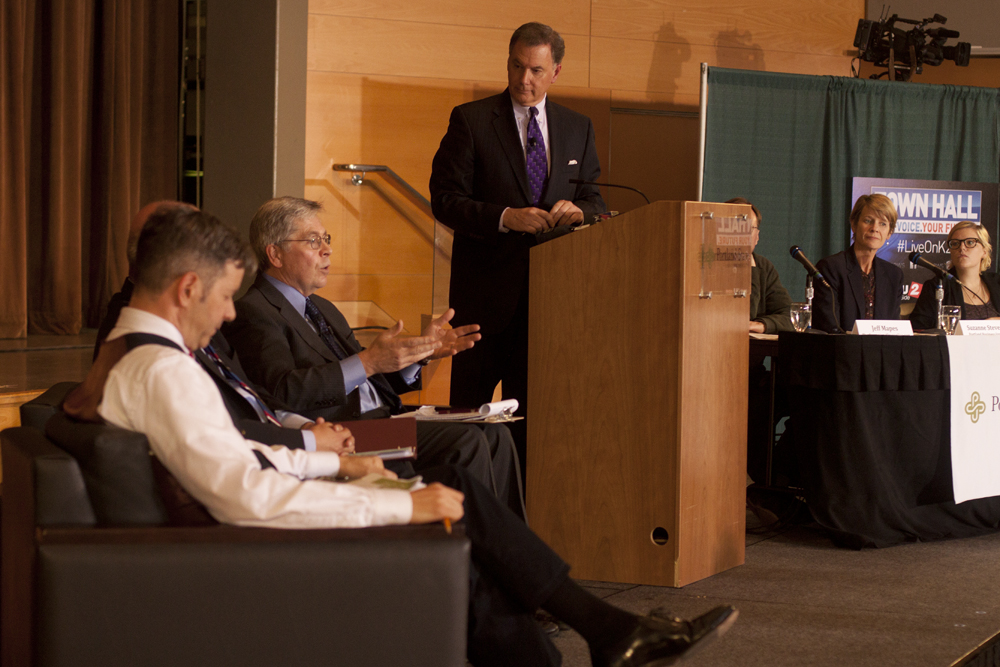