TEHRAN, Iran (AP) – Iran’s hard-line president said Tuesday that the country “has joined the club of nuclear countries” by successfully enriching uranium for the first time – a key process in what Iran maintains is a peaceful energy program.

The announcement from President Mahmoud Ahmadinejad was certain to heighten international tensions surrounding Iran’s nuclear program. The U.N. Security Council has demanded that Iran stop all enrichment by April 28 because of suspicions the program is designed to make nuclear weapons.

Ahmadinejad warned the West that trying to force it to abandon uranium enrichment would “cause an everlasting hatred in the hearts of Iranians.”

The head of the U.N. nuclear watchdog agency, Mohamed ElBaradei, was heading to Iran on Wednesday for talks aimed at resolving the standoff. The timing of the announcement suggested Iran wanted to present him with a fait accompli and argue that it cannot be expected to entirely give up a program showing progress.

The White House, which is pressing for U.N. sanctions against Iran, said the enrichment claims “show that Iran is moving in the wrong direction.”

“Defiant statements and actions only further isolate the regime from the rest of the world,” said White House spokesman Scott McClellan.

Britain’s Foreign Office issued a statement reiterating the U.N. call for a halt to enrichment work and warned that “if Iran does not comply, the Security Council will revisit the issue.”

The Iranian enrichment announcement “is not particularly helpful,” it said.

Uranium enrichment can produce either fuel for a nuclear energy reactor – as Iran says it seeks – or the material needed for an atomic warhead.

Tuesday’s announcement does not mean Iran is immediately capable of doing either. So far it has succeeded only in getting a series of 164 centrifuges to work in the enrichment process. Thousands of centrifuges are needed for a workable program.

But successfully carrying out the highly complicated and delicate process even on a small scale would be a breakthrough, and Iran’s nuclear chief said the program would be expanded to 3,000 centrifuges by the end of the year.

Ahmadinejad announced it at a nationally televised ceremony clearly aimed at drumming up popular Iranian support for the nuclear program. He addressed an audience that included top military commanders and clerics in an ornate hall in one of Iran’s holiest cities, Mashhad. Before he spoke, screens on the stage showed footage of nuclear facilities and scientists at work.

“At this historic moment, with the blessings of God Almighty and the efforts made by our scientists, I declare here that the laboratory-scale nuclear fuel cycle has been completed and young scientists produced enriched uranium needed to the degree for nuclear power plants Sunday,” Ahmadinejad said.

“I formally declare that Iran has joined the club of nuclear countries,” he said. The crowd broke into cheers of “Allahu akbar,” or “God is great.”

As part of the ceremony, costumed dancers performed on the stage, holding aloft vials of raw uranium and also chanting “Allahu akbar.”

Ahmadinejad said the West “has to respect Iran’s right for nuclear energy.”

He said Iran wanted to operate its nuclear program under supervision by the International Atomic Energy Agency and within its rights and the regulations of the Nuclear Non-Proliferation Treaty.

According to the IAEA, a total of 31 countries have nuclear power plants either in operation or under construction.

In Vienna, officials of the IAEA, whose inspectors are now in Iran, declined to comment on Ahmadinejad’s announcement.

But a diplomat familiar with Tehran’s enrichment program said it appeared to be accurate. He demanded anonymity because he was not authorized to discuss information restricted to the agency.

Speaking before the president, Iran’s nuclear chief – Vice President Gholamreza Aghazadeh – told the audience that Iran has produced 110 tons of uranium gas, the feedstock that is pumped into centrifuges for enrichment.

The amount is nearly twice the 60 tons that Iran said last year that it had produced – an amount that former U.N. nuclear inspector David Albright said would be enough to produce up to 20 nuclear bombs if Iran developed the capacity.

Aghazadeh also said a heavy water nuclear reactor, under construction near Arak in central Iran, will be completed by early 2009. The U.S. fears that the spent fuel from a heavy-water reactor can be reprocessed to extract plutonium for use in a bomb.

The IAEA is due to report to the U.N. Security Council on April 28 whether Iran has met its demand for a full halt to uranium enrichment. If Tehran fails to comply, the U.S. and Europe are pressing for sanctions against Iran, a step Russia and China have opposed.

Under the non-proliferation pact, nations without nuclear weapons pledge not to pursue them in exchange for a commitment by five nuclear-weapons states – the United States, Russia, Britain, France and China – to negotiate nuclear disarmament. The treaty guarantees countries that renounce nuclear weapons access to nuclear technology for peaceful purposes.

North Korea withdrew from the treaty in 2003. Three countries have refused to join – India and Pakistan, which conducted rival nuclear tests in 1998, and Israel, which is widely believed to possess weapons.

Books that challenge us 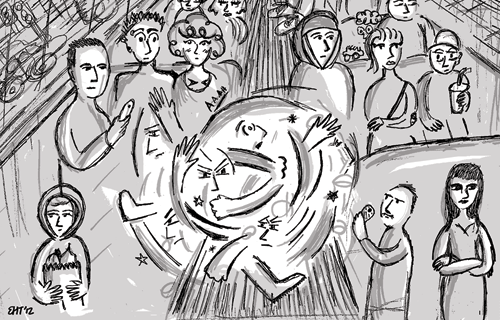