Oregon Championship Day closed at Portland Meadows on Nov. 18, a grey and waterlogged afternoon. Conditions on the dirt track were sloppy—a fact learned the hard way by jockey Anne Sanguinetti. During race four, a one-mile race for 3-year-old fillies, her horse took a wrong step and threw her to the ground.

Oregon Championship Day closed at Portland Meadows on Nov. 18, a grey and waterlogged afternoon. Conditions on the dirt track were sloppy—a fact learned the hard way by jockey Anne Sanguinetti. During race four, a one-mile race for 3-year-old fillies, her horse took a wrong step and threw her to the ground. 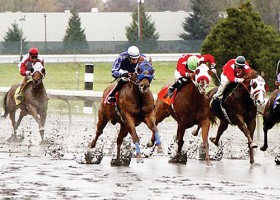 Desperate times: Horse racing is struggling to stay afloat in Oregon. Portland Meadows and other tracks throughout the country are currently trying to figure out a way to compete in an overcrowded sports calendar.

Patrons watching through binoculars and television sets let out a gasp as Sanguinetti bounced off the horse near the four-and-one-half furlong marker and splashed into the mud. The rider walked away uninjured, but the crowd murmured its doubts about her following races. Would she ride in the rest of her heats? And, if so, would her performance be affected by the fall?

The biggest race of the day was race seven—the Don Jackson Futurity, a one-mile race with a $25,000 guaranteed pot that pitted 10 horses against each other. Sanguinetti did indeed appear on time for her appointment, wearing green-and-black silks atop Calypsonoted, the lone female horse among nine males—and neither horse nor rider expressed any trepidation.

Calypsonoted broke from the gates and immediately moved in tight on the hooves of Captainnotsosober, the horse with the best odds of winning. Rounding the first turn, Sanguinetti’s horse dropped into third between Maximatic and Summer Cowboy, and then slipped even farther back as Cantchaco pushed through the pack. At the half-mile mark, Captainnotsosober’s lead had stretched to two-and-a-half lengths.

Just as the fans holding Captainnotsosober’s winning tickets began to smile, Calypsonoted burst forward, eating the distance between fourth and third, between third and second. As they rounded the final turn,
Calypsonoted closed the gap. She pulled even with the favorite over the final stretch, and the two horses left the rest of the field behind, battling over less than a finger’s width for first place. Just yards from the finish, in a half dozen powerful strides, Calypsonoted gained the lead and won the race in just under 1:42, while Sanguinetti proved her nerves were steady as the rain that day.

The crowd at the championship was larger than average, and there are still a few days of live racing left before the season closes on Dec. 9. But the 2013 schedule remains uncertain. Earlier this month, the track’s general manager, Will Alempijevic, said he was unsure how many more years Portland Meadows would be open. If their current ad campaign is unsuccessful and the track continues to lose money, there may be some tough decisions coming.

Though interest in the sport is definitely shrinking, Alempijevic is optimistic. “Horse racing is still very popular, both locally and nationally,” he said. “People still do follow horse racing and care passionately about it, just as they do other sports.”

Whether or not the track manages to right the ship in time for live racing next year, one thing is for certain: After the final post on Dec. 9, Portland Meadows won’t feel the thunder of hooves for another seven months.

Not to worry, though—this doesn’t mean fans won’t be able to watch (and gamble on) the ponies this winter. There are still plenty of opportunities to follow the action in the interim, with races from dozens of other tracks simulcast at Portland Meadows and off-track locations in Portland, plus a host of online options that offer in-depth stats on horses, jockeys and trainers at the click of a mouse. Fans can watch replays of any race during any day from tracks all over the nation as well as in Australia, Japan
and the U.K.

The live racing season may be coming to a close next month, and Portland Meadows will face a tough road back to viability, but despite the hard times the sport is alive and well on the global stage. And that’s not likely to end anytime soon.

Possible new board would raise students’ awareness of campus issues

The choice is yours