For the past few months Portlanders have gone star crazy. I am embarrassed to think what hicks Benicio Del Toro must think Oregonians are.

Benicio fever has caught on like wildfire, making normal everyday folks turn into stalkers. People park and walk on the Hawthorne Bridge in hopes of catching a glimpse of the Latin Lover and read The Mercury to learn all about Benicio’s favorite foods.

Those of you who have no idea what I am talking about must be in a coma, or maybe studying for finals.

“The Hunted,” a movie to be released in 2002, is currently being filmed in the Rose City. Starring Del Toro and Tommy Lee Jones, this thriller portrays our beloved Benicio as a bad guy being pursued by the justice-seeking Jones.

Big trucks, cameras, homemade MAX trains and the closing of the Hawthorne Bridge are all signs that things are afoot. I myself am guilty of rubber necking as I drive by the filming, in hopes to catch a glimpse of something interesting.

PSU accounting student Jessica Jurkowski was lucky enough to be involved in “The Hunted” and gives the dirt on being an extra.

Jurkowski works for Extras Only, an agency that contracts models and actors. Through her agency, she received a phone call about being an extra in “The Hunted.”

The 22-year-old mom was asked if she and her boyfriend, Willy Chenier, would like to do a scene together. The two would be kissing in a field on a winter day, as Benicio runs over them in a heated chase.

And, they would get paid for it.

“We spent most of our time in the holding area,” Jurkowski said. The holding area is where the extras hang out until they are needed.

The two called a recording to find out their call time and discovered Saturday morning that their big kissing scene had been changed.

“The day was too sunny, and there wouldn’t be any continuity as the scenes leading up to it hadn’t been very sunny,” Jurkowski said.

So, Jurkowski and Chenier ended up hanging out on the Hawthorne Bridge, filming driving scenes instead.

So, the two trekked home so Chenier could get his Toyota Tacoma and they drove out on the bridge, lined up with other cars. They were arranged by the color of their vehicles. The cars drove in the inside lanes of the bridge, driving towards Jones and Del Toro, who were in a car being towed along and filmed.They may get called back to film the other scene if necessary. However, they made $72 a piece and may be seen on the big screen soon.

“It seemed well-organized, they did a pretty good job,” Jurkowski said. “You get to meet interesting people, which is the fun of it and maybe you get to meet the stars.”

The two did not get to meet the hunky Del Toro or legendary Jones. Instead, Chenier took a cat nap and Jurkowski did homework while they waited.

“It isn’t as glamorous as people think,” she added. “It can be hard work and tiring.”

Such days usually run eight hours for extras and the clothing can be awkward, as the two were dressed in winter clothes on this particularly sunny May day. There are perks though. “The food was good, with lots of sandwiches,” Jurkowski mentioned with a laugh.

As far as her future plans, Jurkowski hopes to have other opportunities like this one and is glad to add it to her resume. She has also been in several commercials for the Oregon Lottery, Lincoln Mercury, Woodburn Outlet Mall and in a few industrial training videos for various companies.

For those interested in acting and other similar endeavors you can call Extras Only at (503) 227-6055, as anyone can join by paying a yearly fee.

Jurkowski overall enjoyed this experience, “It is the biggest thing to come to Portland in a long time.” 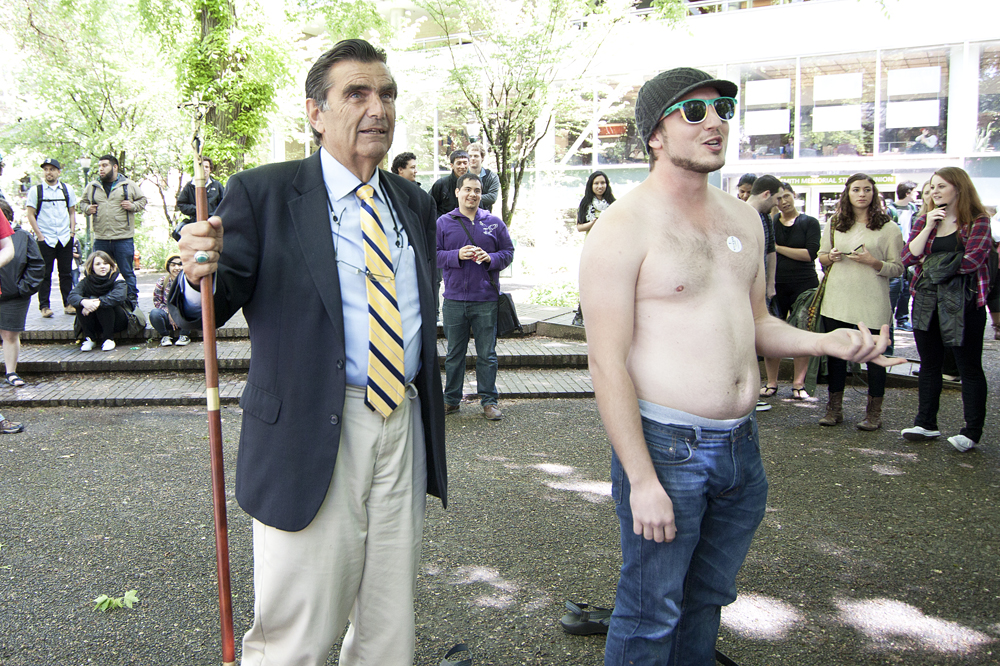 Is a smoking ban headed for the South Park Blocks?