The third victim in the May 26 stabbing incident at the Hollywood Transit Center has been identified as Portland State music student Micah David-Cole Fletcher, age 21. Fletcher’s injuries are not life threatening and he is expected to recover.

Jeremy Joseph Christian, 35, was arrested by Portland Police May 26 after he reportedly launched hateful slurs on the MAX train toward two young women, one of whom is Muslim, while the other is not. According to witnesses, Christian stabbed the three men who came to the defense of the young women.

Christian was booked early on the morning of May 27 on suspicion of aggravated murder and attempted murder.

Christian’s two other victims, who did not survive, have been identified as Ricky John Best, 53, of Happy Valley and Taliesin Myrddin Namkai-Meche, 23, of Southeast Portland.

Best was a city employee, army veteran, and father of four. Namkai-Meche was a former resident of Ashland and graduated from Reed in 2016 with an economics degree.

In an interview with Fox 12, one of the victims of Christian’s hate speech spoke about the events leading up to the attack and thanked the people who came to their aid.

16-year-old Destinee Mangum told Fox 12 she and her 17-year-old friend were riding a MAX train when Christian approached them, yelling as hate speech.

According to the Fox 12 report, “He told us to go back to Saudi Arabia and he told us we shouldn’t be here, to get out of his country,” said Mangum. “He was just telling us that we basically weren’t anything and that we should kill ourselves.”

The 16-year-old said she and her friend were scared and moved to the back of the train while a stranger jumped in to help.

“This white male from the back of us was like, ‘He’s talking to you guys? You guys can’t disrespect these young ladies like that,'” Mangum said. “Then they just all started arguing.”

“Me and my friend were going to get off the MAX, and then we turned around while they were fighting and he just started stabbing people,” Magnum continued in the Fox 12 interview. “It was just blood everywhere and we just started running for our lives.”

Mangum ended the interview by thanking the fellow passengers who stood up for her and her friend.

Mangum’s mom, Dyjuana Hudson said, “I want to say thank you so much…I couldn’t imagine what you’re going through right now as far as losing someone, and I’m sorry it had to be at the hands of my children.”

Community members who’ve interacted with Fletcher have pointed to his long-standing social justice work in Portland. In 2013, he won a poetry contest for a piece he wrote condemning prejudices against Muslims.

Elie Hoover, who connected with Fletcher through their mutual love of slam poetry, social justice, music and theater, said Fletcher’s actions on Friday reflected what she would expect from him.

“I was shocked to hear that he was injured,” Hoover said. “But I was not surprised to know that he stood up against a white supremacist.”

“This is patently, typically Micah,” she continued. “He’s always been incredibly social justice driven. That’s reflected in his art and in his day-to-day.”

“As far as I know he’s been to every rally and every march and every vigil in the last at least two or three years,” Hoover said. “He’s always showing up.”

“When something like this happens, obviously people are tempted to say, ‘He’s always great, he’s such a good person all the time,’” Hoover said. “But really truly, he’s always, always trying to do the right thing.”

Matthew Andrews, Fletcher’s classmate in the school of music, said his heroic display is exactly what he would expect from him.

“Micah impressed me from the moment I met him,” Andrews said. “He’s wise beyond his years about social injustice and unapologetically vocal about it, a gifted and enthusiastic musician, and absolutely fearless. I’m shocked but not surprised, because standing up to bullies and defending his fellow humans is exactly what he’s all about.”

In a statement released on Monday morning, PSU President Wim Wiewel said, “Micah’s family and friends report that he is getting better every day, and he was able to give a thumbs up from the hospital over the weekend in a photo the family shared with the media. We are thankful for his recovery and look forward to the day we can welcome him back to PSU.”

Community members gathered at Hollywood Transit Center on Saturday evening for a vigil to honor the victims.

Christian has been identified as a known white supremacist and was seen at a pro-Trump rally in late April yelling racial slurs and displaying Nazi salutes.

A source who preferred to be unnamed said they knew Christian through a former significant other. “They were close,” the source said. “Christian had just gotten out of prison, and I did not trust him, but I gave him the benefit of the doubt. He ate at my dinner table…he did have racist views that I argued against.”

“I hate to say it, but I’m not surprised he’s now the suspect of the recent Hollywood Transit murders,” the source said. “He definitely seemed capable of violent behavior.”

Hoover warned against the notion of reducing this tragic event only to one man’s mental health crisis. She said this should be considered as part of a larger issue.

“A lot of people are really reducing this to this man’s mental illness, which I think is a wrong-headed way to go about it,” Hoover said. “I think when someone is violent and racist like this man is, there certainly are things at play with a personality disorder or a mental disorder. I can’t speak to what this man was going through specifically, but to say this was a mental health crisis instead of a societal issue is, I think, disingenuous.”

According to Wiewel’s statement, “Our CARE team at PSU has reached out to Micah’s family to provide assistance and support for his recovery. We also are providing support for his classmates in the School of Music and others with counseling and assistance through the campus Center for Student Health and Counseling.”

“We encourage students to utilize PSU’s support services when needed,” Wiewel continued. “They include SHAC, Residential Life staff, our cultural and student resource centers and the Dean of Student Life. In addition, staff with the Student Activities and Leadership Programs and Campus Public Safety are reaching out to student groups such as the Muslim Student Association to offer support.”

Students may also access resource centers on campus and the PSU Office of Global Diversity & Inclusion.

Zerzan said he admired the actions of the victims involved and expressed condolences for their loved ones.

“There’s an inherent risk in confronting dangerous violent persons filled with hate,” Zerzan said. “People intuitively know that risk, and I think it’s heroic that members of the Portland community stood up. Unfortunately, it cost them dearly and it’s a tragedy.”

Standing up to hate

On Friday, just after 6 p.m. two men drove down SW Broadway through the PSU campus in a blue pickup truck shouting, “White Power,” and flashing Nazi salutes to passersby. The Vanguard has reported swastika graffiti in bathrooms, and a white supremacist group posted recruiting posters on campus in March.

“Perhaps some members of the community feel emboldened,” Zerzan said.

“My office doesn’t want anyone to be or feel unsafe,” Zerzan continued. “We will walk students across campus and will respond to concerns.” He encouraged anyone who witnesses alarming or suspicious activity on campus to report to the CPS office and seek assistance.

“I think it’s also important to know that you can also speak directly to the victim and say, ‘Hey, are you okay? Is this okay? Do you need me to do anything?’” Hoover said.  “I think I would be more capable of doing that. But I would encourage anyone, not necessarily to call out and confront violent people who are making threatening horrible racist comments to people, but at least to check in with the victims in the moment to see what they need.”

Hoover said it’s important to address situations of hate or racism, but this doesn’t need to mean putting oneself in harm’s way.

“Absolutely don’t ignore a situation like that,” Hoover said. “It’s not always necessary to put your life on the line. But it is absolutely important to show up for those people.”

Hoover also discussed the value of showing compassion and empathy toward marginalized people and communities on a daily basis.

“[Fletcher] is a great example of what to do to channel your frustration and your anger through your art,” Hoover said. “Show up for marches and rallies…lift up and center the people of color, the Muslims and the queer people in your life and in your community. It’s a day-to-day thing…There are ways that you can show up everyday.”

“I do think the legitimate true actual heroes who stepped in for those women, they deserve to be spoken about,” she continued. “They deserve the crowdfunding they’re getting. The families, of course, need to be recognized for surrounding themselves with people who are so good and pure.”

“But it’s also important to center the women who were the initial victims of the harassment and the threats,” Hoover said. “I think Micah would feel the same way.”

Those who need immediate support can call the after-hours and weekends Multnomah County Crisis Line: 503.988.4888. 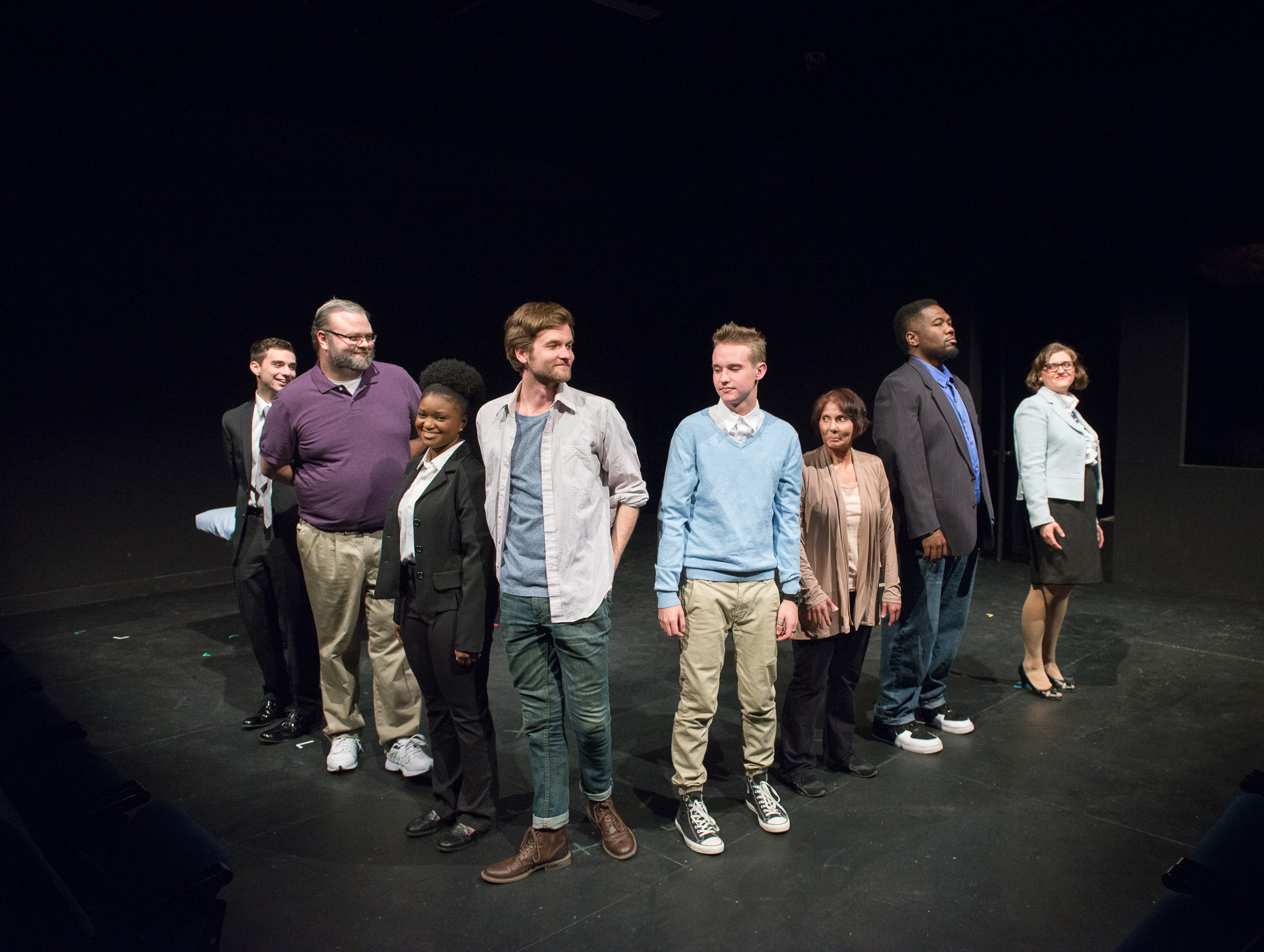