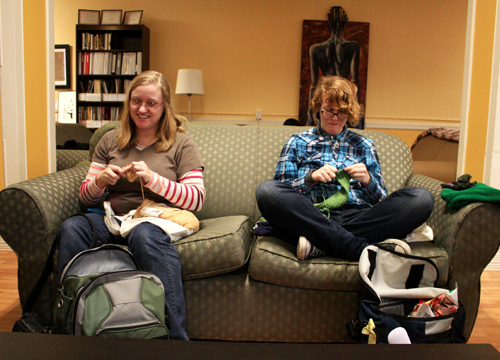 From “Stitch ‘n’ Bitch” to “Crafternoons”

Lori Patterson, former student and volunteer for the Women’s Resource Center, wants to change the world.

Formerly “Stitch ‘n’ Bitch,” Crafternoons is a place where people can go to knit, crochet, sew and gripe about the world. The WRC hosts the event every Wednesday from noon to 1 p.m. in the WRC lounge.

From “Stitch ‘n’ Bitch” to “Crafternoons”

Lori Patterson, former student and volunteer for the Women’s Resource Center, wants to change the world.

Formerly “Stitch ‘n’ Bitch,” Crafternoons is a place where people can go to knit, crochet, sew and gripe about the world. The WRC hosts the event every Wednesday from noon to 1 p.m. in the WRC lounge.

Stitch ‘n’ Bitch was inspired by Debbie Stoller’s book of the same name. In a time when traditional “women’s work” has been cast aside, women are under the impression that in order to be empowered, they have to act like men. As such, they’ve stopped knitting. Stoller sought to have organizations reclaim knitting as a feminist movement.

In a society where male and female roles are put in contrast to one another, it is only through redefining those ideals that change can happen. The WRC’s Crafternoons serve to facilitate this change. By reforming the notion of “women’s work,” they are not holding the feminist movement back; rather, they are transforming what it means to support women.

Aimee Shattuck, director of the Student Activities and Leadership program, worked to turn things around for the WRC. She bought a bucket with needles and yarn and declared that they were going to start their own Stitch ‘n’ Bitch. Her goal was to support women without abandoning traditional practices.

Patterson saw this as an opportunity for expansion. As a student, she utilized the Student Activities and Leadership program to get funding to knit for causes. “Knitting is the conduit for collective consciousness raising across campus,” Patterson said, “and not just across campus, but helping other people in need.”

As the role of women changes, some think that traditional practices are being cast aside. In response to the need for equality, some women are trying not to be seen as feminine. They are instead adhering to what are seen as traditionally masculine roles.

The belief that masculine women get ahead runs contrary to the view of what a woman is supposed to look like. This contradiction puts men and women’s roles at odds with one another. For women, the position to take is unclear. Feminine women are viewed as threatening feminist ideals, and masculine women as threatening interpersonal skills and sensitivity.

Research shows that women who turn on and off masculine traits are more likely to get ahead. “Reducing the backlash effect: Self-monitoring and women’s promotions,” a study that followed men and women enrolled in the first year of a two-year full-time MBA program in the U.S., found that self-monitoring roles benefits women. For men, it was found that self-monitoring makes no difference. This change of gender roles leaves women caught in the middle. There is no role that can adequately be played.

Things like Stitch ‘n’ Bitch and Crafternoons serve to bridge this gap. Instead of trying to adhere to either role, they redefine them.

Trying to impart social change is not without controversy. “Stitch ‘n’ Bitch” was changed after receiving criticism, not for the movement, but for the name. Several other groups on campus found the moniker culturally offensive.

The change to “Crafternoons” signifies a politically correct phrase and allows the group to expand to more than just knitting. It may represent an evolution in the group, but it no longer adequately states the concept.

It is now an event where people can come together to support social reform as much as they support each other. CJ Smith, a sophomore and social work major thinks of it as self-care time.

“In women’s studies, especially, it’s really easy to burn out on things like domestic violence and depression, and it’s nice to have a place to come and relax for a minute,” Smith said.

Madeline Browning, junior anthropology major and indigenous studies minor, said it is a place for empowerment and community.

“Many students come to me and say the problems of the world are so great. There’s nothing I can do,” Patterson said. “And here you have something to do: knit blankets for them.”