As human beings, we are particularly attuned to colors. We have built systems around colors that are meant to keep us safe, direct our rate of travel and define who we are politically and spiritually. We use colors to express our emotional life and our state of well-being. By extension colors are used to elicit emotional responses from us. It is no wonder, then, that artists are acutely aware of, if not intensely interested in, color.

It is this intense interest that led Adam Porterfield and the members of Telegraph, a group that helps artists find resources and support, to create a show titled "Chroma." Porterfield explained that he and other members of Telegraph had been talking about both the physical wonders of light refraction and the way the resulting colors become so imbued with emotion when "Chroma" was conceived. The initial idea was to produce a series of collaborative pieces by teams of local artists. Each team – comprised of a choreographer, a musician and a filmmaker – would be given a single color on which to base the performance. However, once the concept had been established, "It became clear that we needed to include visual artists as well," Porterfield said. The resulting group show currently on display at Gallery 500 has become the anchor for the show’s complex meditation on color.

On the day after what Porterfield described as a successful First Thursday opening, he stood facing a wall of monochromatic visual works in various media and spoke in gentle tones about the process of putting the show together, "We put out the word to local artists. Some already had pieces that would work for the show," he said, indicating Michael Knutson’s "Green Tetracoil," an energetic field of swirling green triangles on a large canvas. "Other works were made specifically for the show," he added.

Porterfield believes that, in many ways, "Chroma" is about challenging the dominant ideas of what color means to human beings. For instance, when the group show was originally conceived the impulse was to hang the artwork in a gradient pattern that would allow the color of the works to blend progressively across the gallery’s walls. However, due to logistical difficulties and a desire to "not follow the immediate impulse," the works became a color palate from which Porterfield worked to create the larger visual representation of the show.

"I think we tried every way to hang this show," he said running his gaze along the gallery walls. "Finally we decided to hang a show that just felt good. We allowed the colors to remain the focus and let the individual works speak for themselves." It is not clear that he is truly satisfied with the end result, "It just feels good," he said, "at least to me."

The difficulties of hanging a group show like "Chroma" have paid off well. In terms of the color, each of the gallery walls are well balanced and pleasing to the eyes allowing the patron to be drawn in to the individual works without being repelled by a dominant wall of color or a garish clash of cool and hot tones. Additionally, the two sculptures by Jesse Hayward in the center of the gallery present a solid pivot around which the paintings seem to orbit.

However, there are a few works that seem to be in the wrong orbit. The more figurative works by Julie Clainos and Eric Swenson, for instance, seem pale in comparison to the outstanding abstract works by Joe Macca, Ellen George, Michael Knutson and Abigail Spring. Additionally, the photographs of Tarina Westlund seem almost too subtle in their presentation of color to warrant being included in the show. This is not to say that subtlety does not have its place. By all means, the muted, dry-earth sepia tones of Tom Cramer’s intricately carved "Tide Pool" presents a beautiful answer to the vivid undulations of Abigail Spring’s "Blue Grid."

Keep in mind that the show’s most exciting offering is yet to be seen. In one week’s time, over the course of three days, the collaborating artists will present their works in film, dance and music. It is unclear exactly how these performances will play out. According to Porterfield, due to the varying methods of collaboration and the collaborating artists desire to "go against the expectations" of certain colors it should be a dynamic show including emotion, humor and even pain.

As with the human experience of color in our everyday world, Telegraph’s color experiment is a blending of hues that when taken as a whole may be greater than the sum of its parts.

Click here to see more images of the gallery.

It doesn’t sock so bad! 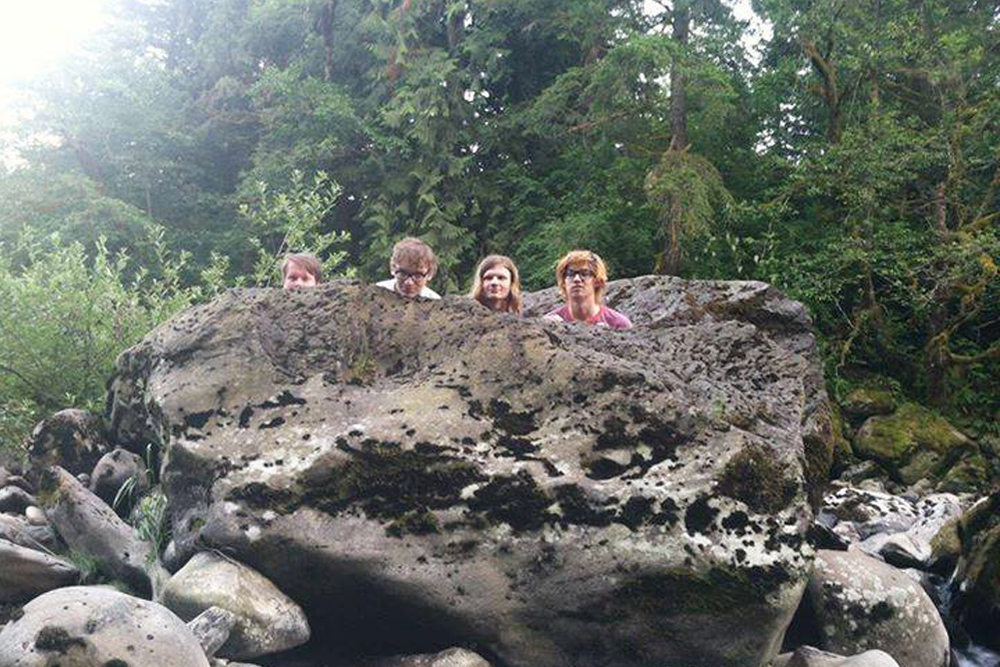