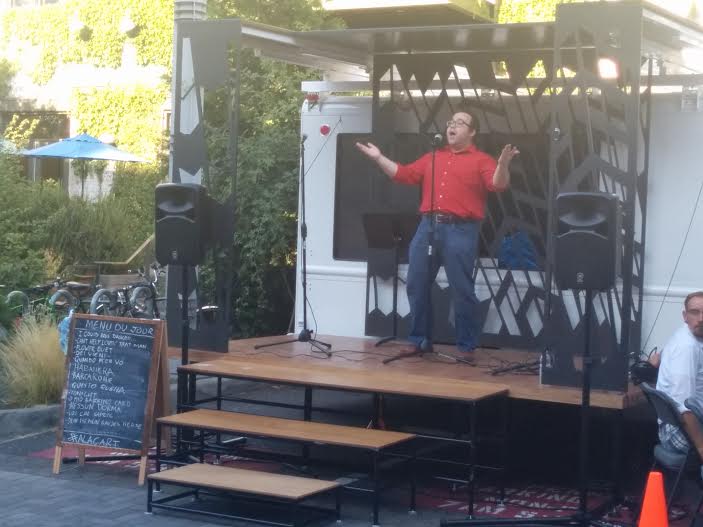 Ordering food from a truck may be old hat for many Portlanders. Now, thanks to a collaboration between the Portland Opera and Portland State’s Center for Public Interest Design, you can order something new from a cart: opera. It’s called Opera a la Cart.

Each performance includes a menu of opera songs written on a chalkboard from which audiences are encouraged to make requests, placing orders as they would for food. Three opera singers take turns on stage, belting a program of opera’s greatest hits.

“We are always looking for ways to connect with the community,” said Clare Burovac, director of artistic operations at the Portland Opera. “We want to be able to give back to everyone in our community, especially the underserved populations.”

The desire to serve those communities made the Portland Opera’s mobile opera idea a perfect fit for CPID, which is a non-profit community design center located within the School of Architecture at PSU. They seek out ways to address the needs of such communities through innovative, sustainable, accessible design practices, formulating solutions to systemic problems locally and globally.

“I think people are really surprised to see opera in this format out on the street and I think they’re really grateful to be able to experience something that’s usually out of a lot of people’s price range,” said Todd Ferry, a Research Associate at CPID and the primary faculty member for this assignment.

Students played a crucial role in these endeavors as Student Fellows, a CPID program that consists of outstanding graduate students who work closely with faculty and lead these projects, as designers and builders.

“As a student it’s a great opportunity to go outside of studio and have real experience with people and communities and also learning how to build on site and design on site,” said Alejandra Ruiz, one the Student Fellow leaders for the Opera a la Cart project. “Some of these projects you don’t know what you’re getting into and you have to design and build in a very short period of time.”

Every client and project is different, but in this case, CPID was approached by the Portland Opera who had the notion to convert a food truck into a mobile opera performance space, thus bringing opera music to communities who otherwise might not experience it. The project aligned with the CPID’s mission and so they took it on.

The design process started with the truck provided by the opera. The students explored how it could facilitate a performance and also provide an educational, interactive experience with the audience. They researched theater stages and food carts, and with those concepts in mind began to draft multiple designs.

“The process of working with Todd [Ferry] and his group was tremendous,” Burovac said. “It was very collaborative and they had lots of great ideas and they were very receptive to our needs about what opera singers need and what would be workable.”

At one point, they took the truck out for a day of unannounced, guerrilla performances at four different locations, where the students could observe the performers, noticing the height and distance relationships between the truck and singers and audience. Sometimes they used tables as a stage; at one point, the performers sang on top of the truck.

“That was an important part of the research,” Ruiz said.

The final product consists of a stage that folds down on the outside, the exterior primarily being made of wood and steel. The proscenium panels are meant to mimic the idea of curtains and are partially inspired by the design of the Sydney Opera House. The inside can be used as a secondary place of engagement for future programming, and much of it is made of reclaimed lumber from the dumpster and the Rebuilding Center.

William Chandler, the other Student Fellow project leader for Opera a la Cart, said the design was intended to maximize efficiency, function, and multiple usages. One of their greatest challenges was building a suitable performance space that was also road worthy.

Seeing the response to the truck has been especially exciting for those involved in its creation. Burovac said that while some people plan to attend the opera truck performances, most of the audience members stumble upon it.

“Seeing how people are amazed by this truck, that arrives to one place and transforms into a stage and listening to the opera, I think that’s the most rewarding thing,” Ruiz said.

But while the design and construction of the cart itself is impressive, Chandler wants people to remember its purpose and how it’s answering a specific need: to expose more people to opera.

“Remember that it looks cool, it’s a fun design, it’s really interesting to look at and to actually see a performance happening, but the basis of it is that it’s a public interest project, and the idea is to spread opera to a wider population,” Chandler said. “That’s the core of what we’re trying to get at.”

Burovac reiterated this goal. While she’s heard that some people have heard the music and become interested in seeing their full productions downtown, the purpose is really to provide a free performance for the community.

“We love hearing that people want to come and see the product in the opera house which is what we do best,” Burovac said. “But at the same time, to be able to give a free performance out in the community for people who might not be interested in coming downtown but really enjoy hearing us sing for twenty minutes, it’s great. I’m really proud of this project.” 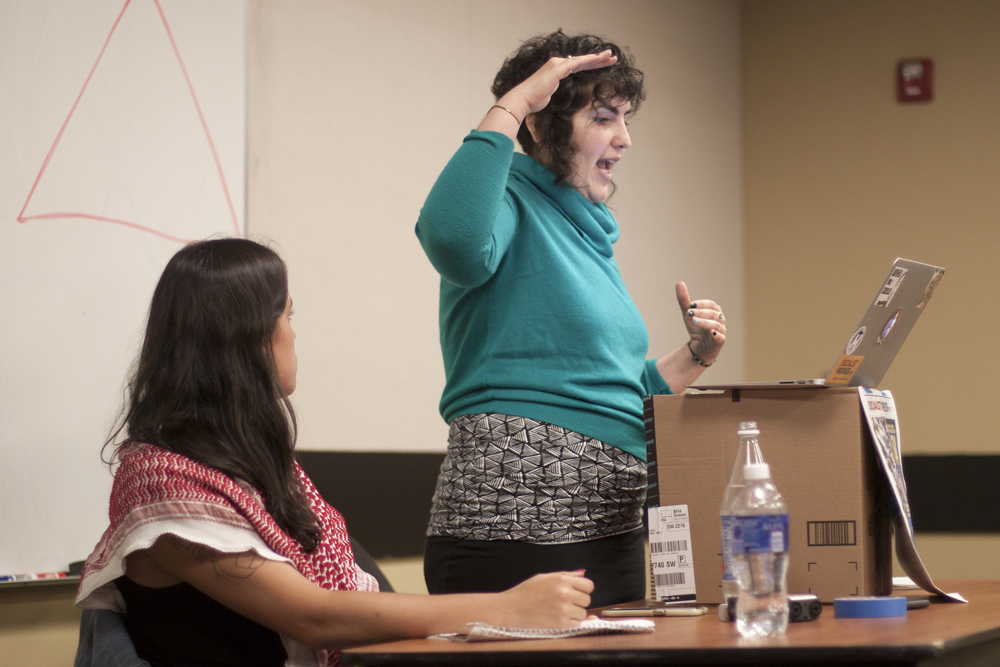 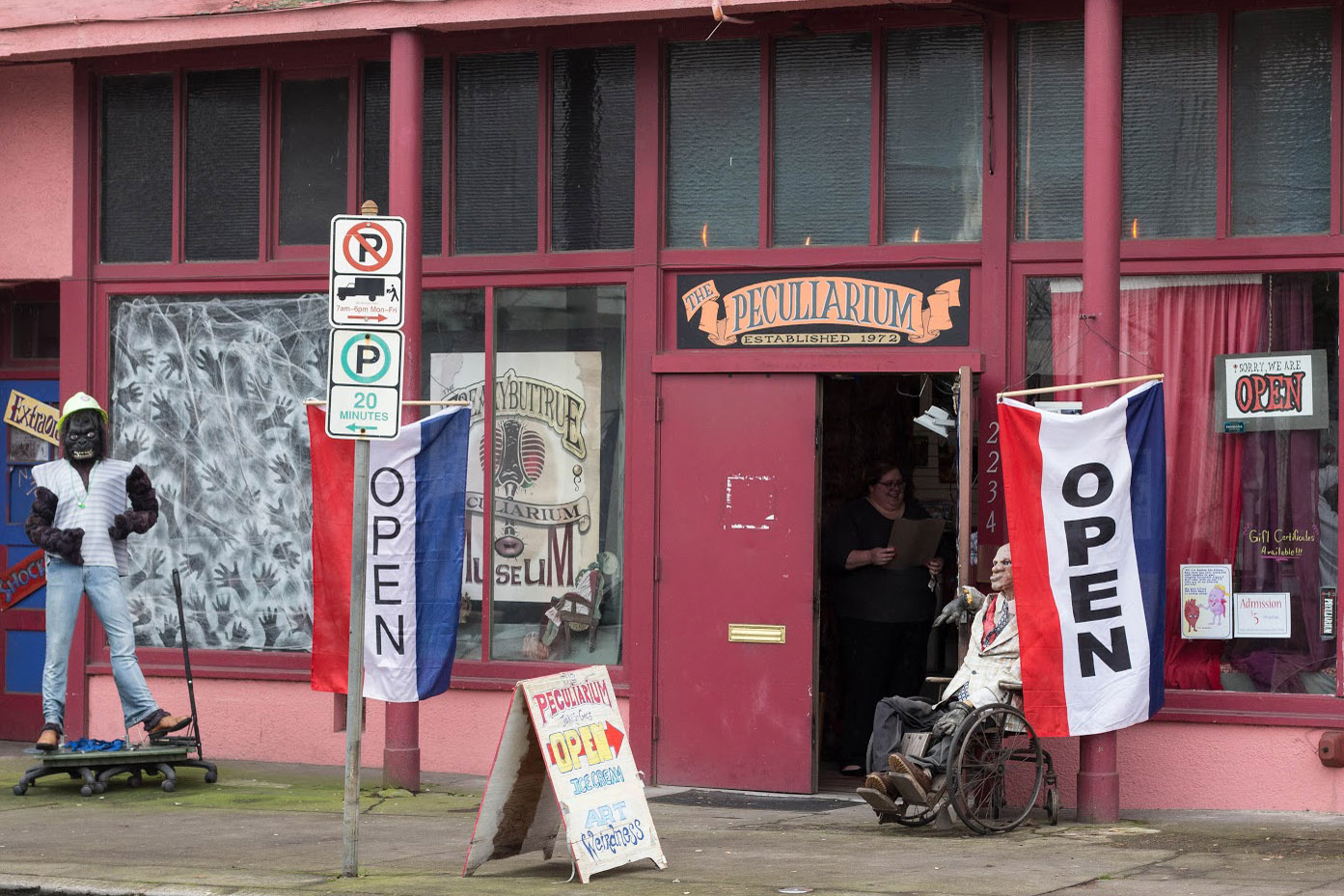