Vaughn was a three-time all-State player for Reedsport, and shewon her district championship in 2001 and 2003. Vaughn finishedthird in state each of the past two years. Anast competed in nineof 12 tournaments as a freshman for the Boise State Broncos,compiling an 83.6 scoring average.

Also joining the Vikings this season will be Haley Brown ofAustin, Texas, who signed a letter of intent earlier this year.

Men’s Basketball
Not only did the Vikings sweep this season’s series against Montanaand Northern Arizona during the Big Sky Conference, theydrastically improved all over the court. The PSU Men’s basketballteam was named Most Improved Team in the Big Sky for the 2003-04season.

As a strongly defensive team, the Vikings led the Big SkyConference in rebounding margin (+5.4) and field goal percentagedefense (.427).

Williams gave Sharapova quite the compliment, saying, “She’skind of like me. She doesn’t back off. She keeps giving her all.”Andy Roddick, a U.S Tennis pro who won his rain-suspended semifinalalso said, “At 17, to have that ability already, it’s prettyamazing.”

Sharapova played fiercely for her win at Wimbledon, despite herinexperience and being the tournament’s lowest-seeded femalechampion (no.13). She chalks it up to being “a very tough personwhen on the court.”

Tour de France
Five-time champion Lance Armstrong is seeking his sixth win despitedoubts from those who feel that he is past his prime. Saturday,July 3 Armstrong took second place behind Swiss rider FabianCancellara at the 3.8 prologue race in Liege, Belgium. This racedetermined the jersey that the top four riders wear. “I’m satisfiedby the way I felt, but I’m disappointed to lose. The mostimportant, is how does it feel? I was very comfortable, I feltstrong, and that feels good.”

After Saturday’s prologue race, the 188 riders were prepared andready to compete in the longer legs of the tour. Armstrongdescribed the various types of terrain by saying, “There is a lotof dangerous racing to go. Just in three days, we have somesections of cobblestones that if it rains and is windy, will bevery dangerous.”

“But that’s what bike racing is all about, different terrain,mountains, flat stages, crosswinds and, this year, cobblestones,”said Armstrong’s rival Tyler Hamilton, “we’ll try to stay towardthe front and try to stay upright, obviously. Our goal for that daywas safety.”

Basketball – NBA
This year’s draft went by quickly, but the free agent period issomewhat suspenseful this year. With 138 players looking to sign,according to the Oregonian, “there are enough gems to make this oneof the more interesting free agent periods in recent memory.” Why?Among those 138 players are a variety of skill and basketballtalent that is waiting to be tapped or revived. Choosing the rightplayers is key to build a strongly balanced team, but for theplayers it is often about the money and feeling out where they bestfit.

With many of the league’s salaries at or near cap, money istight this year. Some clubs will only be able to offer mid-level $5million salaries while others will exceed their salary cap tore-sign current players. The Denver Nuggets are expected to be themajor player this year with a $26 million cushion.

Kobe Bryant is the “jewel” of a free agent this year. Bryantopted out of his contract with the Lakers landing him the commandof a $100 million salary with any team in the league. Bryant couldalso stay with the Lakers for a seventh year and rack in $130million.

U.S. Open Golf
On Sunday July 4, Meg Mallon left Annika Sorenstam and everybodyelse behind with the best final round by a winner in U.S. Women’sOpen history. “I’m 41 years old, and you’ve got to enjoy your days,enjoy when things like this happen,” Mallon said. “I was going togo out and have a fun time and play a great golf course and just dothe best I can. And it was all that.” Three strokes behind JenniferRosales after the third round, Mallon shot a 6-under 65 on Sundayfor her second victory in the tournament and fourth major title.Sorenstam birdied the final two holes for a 67 to finish second,two strokes back. “I did what I could do,” Sorenstam said. “I gotoutplayed. I don’t know how many of you thought there would be a 65in the last few groups, but Meg proved us all wrong today.”

Men’s Soccer-Euro 2004
Greece will host the Olympic games in August as European soccerchampions, an extraordinary achievement. It was Rehhagel’spragmatic approach to the game and to the tournament as a wholethat brought Greece their success. Rehhagel has molded a side thatalso knows how to mix it in midfield and strike when the chancescome. There might be doubts about Greece’s ability to organize theOlympic games, but they certainly know how to organize adefense.

No team in a World Cup or previous European Championship hasdone what Greece has done here. They have beaten the host nationtwice, knocked out the holders (France), beaten the favorites(Czech Republic) and won the tournament with a foreign coach.

In addition, they had never previously won a match in a final.Denmark won the European title in 1992 after being invited to takepart at the last minute when Yugoslavia was thrown out, but theywere an established soccer power. Perhaps only West Germany’s winin the 1954 World Cup final, when they beat out favorite Hungary3-2, compares. That German victory, which followed an 8-3 drubbingby Hungary in a group game, took place exactly 50 years agotoday.

NASCAR
July 4 marked the 20th anniversary of Richard Petty’s 200th win.The seven-time NASCAR champion, Petty, now 67 years of age, gainedhis 200th win at Daytona International Speedway on July 4, 1984.During the 1984 race, President Reagan gave the command,”Gentlemen, start your engines,” and Petty and his No.43 STPPontiac were revved and ready to win.

“I think everybody was talking about his 200th win before therace,” said Cale Yaraborough, “But everybody was also thinkingabout not letting him get it, too.” Yaraborough gave Petty a runfor his win that day as they raced wheel-to-wheel andfender-to-fender, before Petty finally edged Yaraborough at theline to earn his milestone 200th victory.

Saturday, July 3 NASCAR honored Petty before the Pepsi 400 atDaytona (IS), with a lap around the speedway in his No. 43 STPPontiac with a drive into victory lane with celebration to follow.Petty is still NASCAR’s all-time winningest driver, and no one isclose to setting a new mark or catching his. Reflecting back on thevictorious day, Petty said, “It was a really special day. You windup in front of the President of the United States on July 4 and winthe race in the final laps. All of it could have been scripted…It was really unreal.”

National Hockey League
On a normal year, July 1 would be a big day for hockey players andgeneral managers. But this year, the opening day for free agent”shopping” is uncertain. Labor issues have threatened the start ofthe 2004-05 season, and possibly delay it entirely. The cut of

Usually there is little movement among restricted free agentsbecause their current teams have the right to match any contractoffers and if they choose not to match they can receive up to fivefirst-round draft picks as compensation. “We have to open up somespots for individuals on our hockey club to be able to moveforward, ” said Ottawa general manager John Muckler, “we’ll move inanother direction and I think we’ll do fine.” It seems this is theattitude that the majority of the national hockey teams and clubsmust operate under in order to rejuvenate teams andplayers-especially if they plan to get the 2004-05 season startedon time. 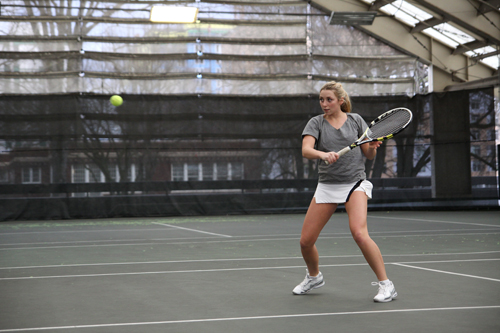