In 2010, the Multnomah Food Initiative was launched in order to provide the state with a better, healthier food system. Multnomah County announced a 15-year plan during which they would attempt to make the MFI’s vision a reality. The plan aims to provide more local food options, as well as healthier ones, that would help boost the economy. This proposal led to a $7.5 million grant from the U.S. federal government, aimed at supporting a healthy community and engaging community partners in the process.

While much of the money went toward schools in an effort to combat obesity and toward farms to increase zoning areas, financial support from the grant also supports the local markets. The grant has already provided benefits to 19 stores, most of which are located in North Portland, and has helped promote the sale of healthier options.

The Janus Youth Village Market is one of the locations to receive support from the federal grant.

“Our store’s mission is to provide the community with quality, fresh, affordable groceries; to be a convenient and safe environment for everyone; to provide jobs for youth and adults; and to reflect the needs of the community. The county has been very supportive,” said assistant manager Egbevado Ananouko.

“It’s not even about the dollar amount; it’s about the commitment and the long-term support, and that’s what the county has been supporting our store with…They are supporting communities that don’t have access to healthy food, in order to get healthy food into the community,” Ananouko said.

According to Ananouko, the county has also been a proponent of community building, health awareness and supporting the Village Market’s efforts to inform its surrounding community of healthier options.

The Multnomah County grant has aided numerous locations throughout the city, but it is not the only source of help for local markets.

In February 2011, the Oregon Food Bank received $50,000 from Bank of America in order to support healthy lifestyles among people in need. The food bank used a sizable amount of the grant to buy three truckloads of healthy produce, while using the rest to pursue healthier food choices regardless of cost. The organization is currently committed to promoting healthy lifestyles for those in low-income areas.

Additionally, the city of Portland itself has helped to do its part in helping citizens find fresh and healthy food. The Neighborhood Small Grants Program is a city-wide movement that provides financial support to local organizations that benefit the community. Often food desert markets fall under this category.

Spencer Burton, organizer of the Boise-Eliot Village Square in North Portland, said that the grant allowed for significant improvements. “We got a grant of $1,745 from the Neighborhood Small Grants Program, and we were able to convert buildings, plant 50 trees, get 25–50 people to help with benches, and basically transform our property,” Burton said.

However, it wasn’t all smooth sailing. “There were challenges from the city because of the property, as there was nothing there for 20 years. We had great corner lots, but it was still a struggle to get it off [the ground],” Burton said.

“The location was a food desert for the neighborhood, and we had this idea for a village square, where local people could bring whatever they made,” Burton said. “We also had a stage so that bands could play, a Gospel reading on Sundays, a community garden and a place for artists to paint murals for artwork on the corner. It was really a demonstration of local artists and local growers.”

Burton believes that while the grants help, the city needs to increase its effort beyond awarding aid to food desert neighborhoods and local markets.

Still, Burton remains hopeful that his project, as well as similar ones around Portland, can succeed with help.

“I just think that a village square is a great idea to promote local entrepreneurism, and big small projects for the neighborhood. All that stuff is well worth the money spent,” Burton said. 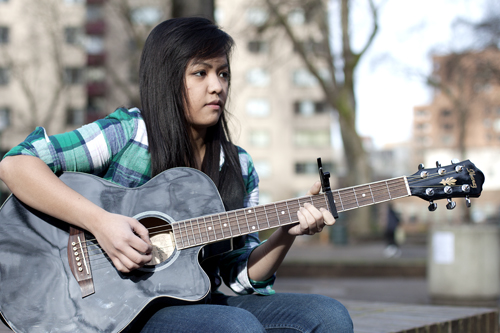