Jan Haaken is a psychology professor at PSU who has come up with unconventional ways of educating her students. She calls it "Social Action Research" and has used it as an effective teaching tool.

Haaken, an instructor and activist, is interested in how knowledge is produced. She uses "video activism" to record real-life events and uses it as a learning tool in her classroom, and in the community, to educate people about the world.

"Dr. Haaken’s class has been significant for me this term," psychology major Nara Verzuh said. "She is not only a professor and a researcher, but also an activist. She challenges her students to look at the broader social and cultural context, which has been extremely meaningful for me."

As a critical psychologist, Haaken has long had an interest in how the camera allows for more access to a better awareness of the world. She acknowledges, however, that video activists still bring a bias when they capture people on film.

"The camera is no different than any other instrument at telling the story, because we bring our own assumptions to the table," she said. "We are always involved in the process of recording human experiences, so we can never truly be objective."

Video works well as a learning tool because people tend to believe what they see. Moving pictures are convincing and do not often require explanation. Through video, she challenges students to think critically and become more aware of the issues that they often overlook.

"It’s always a project of discovery with no obvious answers, just a list of questions," Haaken said. "As a social action researcher, I aim to focus on the questions that allow me to broaden the understanding of the experiences people have in real life in order to accurately tell the story."

Haaken values the power of the researcher to go anywhere and find the problems people are facing in their daily lives. She always aims to show multiple voices and perspectives. When done properly, the people being videotaped speak for themselves without the need for interpretation.

She saw the necessity for better a understanding of silenced groups after reading research from other experts in the field of psychology. She noticed how marginalized people often have their stories turned into statistics and case studies, as opposed to having their voices heard.

"It’s important to not just extract raw material from a sample of the population to use as sources of data," Haaken said. "I include the people I interview in the production process as consultants so they have a say in the final product. They review clips of the film to make sure it clearly represents what they’re doing."

In her film, "Diamonds, Gun and Rice: Sierra Leone and the Women’s Peace Movement," Haaken reports women’s perspective on war in their own words. The film describes how these women have survived and continue to rebuild their country while enduring violence.

She went to Sierra Leone and interviewed the women leaders, healers and teachers who best articulate the needs of their people. The video is part of a soon-to-be-released curriculum book, designed to give students the information necessary to internalize the stories of these women and encourage ongoing research.

"When the media has gone on to the next story," Haaken said, "the women are still coping, surviving and rebuilding their communities. The video and curriculum book brings emotional immediacy to the war on women, to sustain engagement and continue learning and understanding. The book also allowed space for the women survivors to contribute their expertise through writing."

Haaken uses video activism to broaden the awareness of these cultures without changing their stories. She aims to dismantle the language and cultural barrier by engaging people in dialogue around these issues. Video keeps the audience engaged and places these problems into context in our everyday lives to better our understanding of the world around us.

Her current documentary video project, co-produced by PSU and Kwamba Productions, is titled "Queens of Heart." The documentary tells the story of Darcelle XV and Company, the oldest surviving drag club in the U.S. During the summers of 2003 and 2004, over a dozen PSU students worked as production assistants while filming at the club. PSU students also served as research assistants. The documentary focuses on audience and performer interactions, and explores the question of why this drag club has become the traditional place for brides throughout Oregon to come for their "last night out." 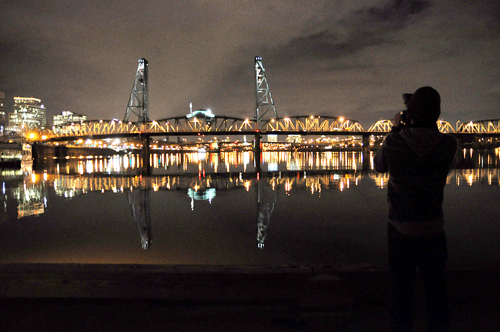 A place for every weekday

Nike scores a pair of rookies