Because some of these buildings are older than God, avid cable watchers may want to avoid them. The Blackstone, Montgomery Court, Parkway Manor, St. Helens Court, the Stratford and the King Albert have all been a part of Portland State housing since 1969, but have been standing for over seven decades.

Parkway Manor is the only one of the six to offer cable television at an extra cost, and cable is not available on the first floor of the building. These antique style buildings usually appeal to the more experienced or non-traditional college student, with their wood floors, bathtub-only restrooms and antiquated capabilities. Because five of these six are so similar, the Blackstone will serve as the prime example for all five.

Most notice the Blackstone because of the strikingly cheesy Egyptian architecture around the entrance and sparkle near the roof of the building. The building offers some dorm-like apartments with community bathrooms and community kitchens, but it primarily consists of studio, one-bedroom and two-bedroom apartments.

Although the Blackstone is over 70 years old, senior communication student and Blackstone resident Bobby Andruszko said the temperature in the Blackstone stays moderate all year round. Aside from staying cool in the summer and warm in the winter, Andruszko said most people get along in the building and are very friendly.

Recently married and soon expecting a baby boy, Andruszko lives in university housing because of the convenient location and moderately priced apartments. He said that even though inconsiderate noisy neighbors bother him and that the mail does not arrive until late in the day, the lower rent prices at the Blackstone, compared to similar locations, make it worth dealing with the problems.

Migliore said the social environment of Montgomery Court is one of his favorite aspects of the building, one of the housing buildings most similar to the typical PSU dormitory. Each of the furnished sleepers has its own sink, refrigerator and microwave, and the residents share community restrooms.

Resembling a 19th century British orphanage, Montgomery Court has an aged but slightly drab aura to it. Each floor has a sizeable balcony overlooking the community courtyard and large lounge areas on the first floor are available for group use.

Migliore said it was difficult to acclimate to sharing a bathroom with so many people, but that in other ways he enjoys the close proximity with his dorm-mates. Montgomery Court is the only one of the six buildings that has a residential assistant on each floor, and the student-run Resident Hall Association is housed on the first floor of the building.

Each of the six buildings includes electricity and trash with rent, but phone and internet service are not included. An important fact to note is that only the Blackstone and Montgomery Court have showers in the bathrooms. Each of the other four buildings only has bathtubs in their studios, one- and two-bedroom apartments.

The antique apartments cost less than university housing’s more modern options, but are also smaller and quite a bit older. The Stratford and the first and second floors of Montgomery Court are the only parts of the six buildings that do not allow smoking.

Only half of modern housing is actually modern. The Broadway Housing Building and Stephen Epler Hall are less than three years old, and what they lack in square footage, they make up for in chic-ness. It’s almost as if someone (read: the administration) spent millions of dollars to bring Pearl District-type housing to PSU.

The other half of modern housing is straight out of the 1980s. Both West Hall and the Ondine Residence Hall are pleasant jail cells, which is by no means bad for the average PSU student. The key is to remember that you will not live in the Office Space of apartments for long.

Still, the four newest additions to university housing connect in more ways than they did in the era during which they were constructed – some offering traditional students First Year Experience programs and others coming as close as PSU gets to luxury.

West Hall is the adult version of the Ondine Residence Hall, university housing’s only true residence hall. Both built in the 1980s, they offer a more modern design and certain comforts to PSU students looking for a more traditional college experience.

West Hall is an L-shaped block of bland one-bedroom apartments that leave little for the eye to ponder. These apartments of mediocre size and moderate cost are no more exciting inside than they are out. For many students, the bland atmosphere is a small price to pay for the other benefits the building boasts, such as rent that includes phone, cable and internet.

Recent PSU graduate Diana Chang loves her West Hall apartment much more than the Blackstone apartment she used to rent. She said even though West Hall is a bit farther from campus (about four blocks), having an elevator and a more modern structure make a huge difference.

West Hall allows smoking on six of its nine floors, while the Ondine Residence Hall allows smoking on nine of the building’s 15 floors. The Ondine is the tallest building PSU owns, and also the worst smelling. During the 2003-04 academic year, student bathrooms on the third floor overflowed, drenching residents’ rooms with raw sewage. Sewage even flowed into the stairwells.

Nevertheless, the floor was recovered and the building has been remodeled. Now the Ondine has its own cafeteria located on the first floor, a benefit that allows easy food access for the typically busy student.

Like West Hall, Ondine rent includes phone, internet and cable. Both buildings, along with the Broadway, require students to set up their own electric service with Portland General Electric. Epler Hall is the only one of these four buildings that includes electricity with rent.

The Ondine and Broadway Housing Building both participate in the Residence Life First Year Experience program, designed to give first-year students a more traditional college experience at what is in reality a non-traditional college. The program, which includes a meal plan and lasts for the full academic year, costs between $7,000 and $10,500, depending on which of the two buildings the student chooses to live in.

Stephen Epler Hall’s Global Village is a similar program, made specifically to help international students and domestic students become more involved with one another and the university.

Epler Hall also provides students with a housing option that is focused on environmental sustainability, and the studio apartments come furnished.

The Broadway Building and Epler Hall are nearly identical, completed only a year apart from one another in 2003 and 2004. While both are non-smoking buildings, University Housing describes Epler as giving students Euro-style studio apartments while Broadway has “the latest contemporary accommodations ideal for progressive tastes.”

Portland State junior Shane Herman said it is convenient to have the businesses (Chipotle, EB Games, Great Clips, etc.) just below his apartment. He said that even though he appreciates the building’s location and would not like to live in any other building, he finds it annoying that the Broadway lacks an outgoing mail slot and wishes the apartment had come furnished.

Both the Broadway and Epler Hall only provide a small refrigerator and miniature stove. Without an oven or a full stove, many students find cooking quite difficult in both buildings.

Near-campus housing is a great option for students looking for a more independent lifestyle. Although the buildings are farther away from campus, the longest walk to campus is 10 minutes from the Goose Hollow.

The administrator of Portland State’s housing, College Housing Northwest, will separate from PSU March 1, 2007. After the contract ends, Housing Northwest will take with it every near-campus building and will no longer be considered part of Portland State University Housing. This should cause little change to residents’ lives, but the possibilities of change are still vast.

Having lived in four different Goose Hollow apartments, I know the buildings in greater detail than the freckles on my face. The Goose Hollow complex is divided into two buildings: a 16-story tower and a six-story plaza. The tower is more economically feasible than the plaza, but the extra cost is worth it to some to have the plaza’s pleasant plaster walls instead of the tower’s cold concrete.

The tower’s concrete is a superb noise barrier, allowing residents to blast their favorite movie or music at higher than usual volumes. The plaza’s walls are quite thin and require soft footsteps if living on a higher-level floor, or long-lasting patience if living in the lower levels.

The first four floors of the tower are non-smoking, but the remainder of the complex allows smoking. One of the greatest benefits of the tower is having a great view, which is only available from the fifth floor and above. If living on the bottom four floors, residents have a fantastic view of other people’s windows.

The tower has laundry facilities on each floor, but the Goose Hollow staff consistently warns people not to leave their laundry unattended after complaints of stolen laundry surfaced over the last few years. The plaza has less convenient laundry facilities, the only one located on the third floor of the building.

The Goose Hollow is one of the few university housing options with parking available. There is garage parking available under the complex for $50 per month, or residents of the area can pay the City of Portland $35 for the entire year for street parking.

Although finding a spot on the street can be difficult at times, one is always available. The street parking is arguably as safe as parking in the garage, as the unruly college students who live in the Goose Hollow often occupy themselves by meddling with cars in the garage.

The tower’s studios include a “full” kitchen, but the mini-fridge included with the apartment makes it nearly impossible to store any food. It almost becomes a necessity to purchase a second mini-fridge in order to store perishables.

The Clifton House is the most distinctive of the PSU housing options. Located at the top of the Park Blocks on the edge of the West Hills, the 30 apartments have a decent view and an interesting inner courtyard.

Despite its close and desirable location, the apartments are moderately priced. However, since there are so few it is difficult to secure one. The Clifton apartments have their own appeal that makes them highly valued.

The Palladian is quite close to campus, across the street from the Broadway Housing Building, and has the cheapest apartments per square foot. The building is old and, like the Clifton, has only a few apartments, and vacancies are infrequent.

The final three apartment buildings are strikingly similar. Like the Palladian and the Clifton House, the other three all have bathtubs only and electricity, cable and internet are not included with rent.

Both the Cambrian and the Tiffany are entirely uninteresting, one resembling a large brown brick and the other a large white brick. Both are located no more than two blocks from Safeway and the streetcar line and are no worse than any other student housing option.

Currently, every apartment on campus and near campus is full. University Housing is transplanting students to University Place, a refurbished hotel that PSU purchased in 2005 to use as overflow housing for students and a place for PSU-based conferences.

University Housing will have students temporarily move into University Place until their apartment becomes available. The rooms in University Place are no different than a hotel room and living in them for an extended period has never been seen as a pleasant experience. 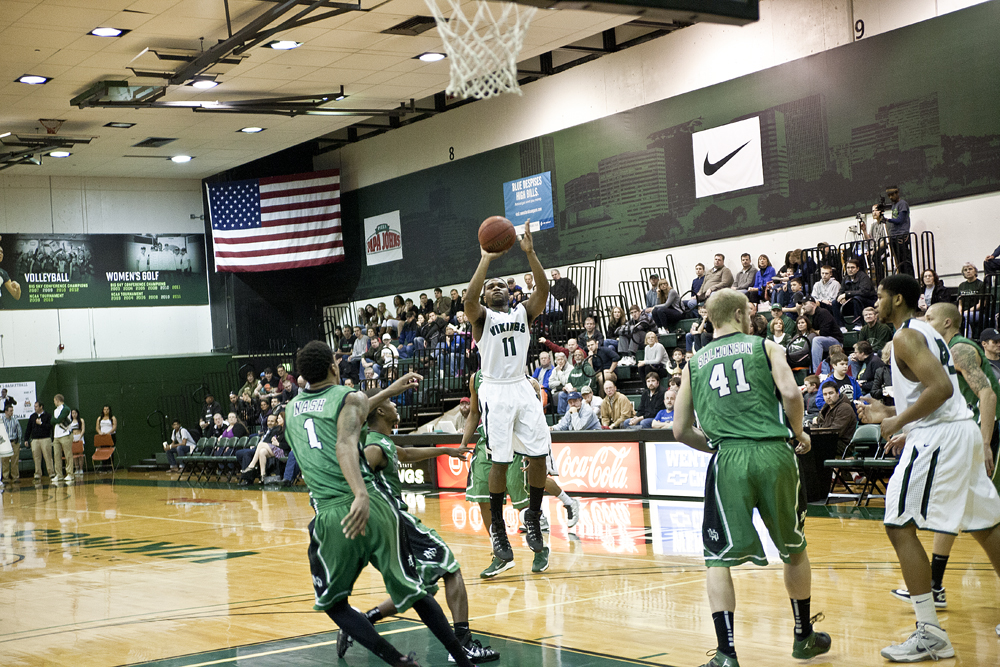 Tim Douglas leads from the point