Getting an opportunity to see a Vikings basketball game on the tube does not come along all that often. But with the upstart regional sports network Comcast SportsNet looking to fill out its schedule with local events, fans may be able to catch at least a few Portland State games without leaving the comfort of their living room.

Getting an opportunity to see a Vikings basketball game on the tube does not come along all that often.

But with the upstart regional sports network Comcast SportsNet looking to fill out its schedule with local events, fans may be able to catch at least a few Portland State games without leaving the comfort of their living room.

“We have an agreement that calls for six to 10 basketball games. But being a new network, they’re not in position yet to do a lot of productions,” said athletic director Torre Chisolm. “So we have to rely on picking up games produced by other networks.”

This was the case Sunday when the Vikings (10-8, 3-2 BSC) faced Idaho State (5-11, 2-1 BSC) in Pocatello, Idaho. The contest was the first Big Sky Game of the Week to air this season on Altitude Sports. The network serves the Rocky Mountain region, carrying games for the NBA’s Denver Nuggets and the NHL’s Colorado Avalanche, in addition to several small market professional teams.

“The only concern I have with the games being on television is that someone may try to do something as an individual that takes away from what the team is trying to do,” said head coach Ken Bone.

Bone said televised games can only help the program from an exposure standpoint, which could then bolster recruiting efforts for Portland State basketball.

“It’s great to tell a recruit, ‘Go watch us on TV,'” Bone said. “When I was at Washington, the major questions recruits asked were, ‘Are all your games televised?’ and ‘How often is the team on ESPN?'”

Throughout the rest of the Big Sky conference season, Altitude Sports will broadcast a game of the week every Sunday, and Comcast SportsNet will also carry games in the Portland area. Portland State’s victory Sunday was its one and only scheduled appearance in a Big Sky Game of the Week, whereas Northern Arizona and Montana will each be featured three times.

However, Viking fans should not fret, as Chisholm is hard at work trying to secure more televised games this season. The athletic department announced just last week the Jan. 31 home game versus Montana can be seen on Comcast SportsNet.

“We are trying to get some more games scheduled in February,” Chisholm said. “But it depends on availability whether or not those get done. Ideally, we’d like to get our road games televised back in the home market so the fans can see those games.”

Until more agreements can be made and deals struck, the best bet for Vikings fans to see their team will be to make the trek to the Stott Center to catch a game in person. But if fans want to see road games live or watch past games on demand, Big Sky TV may be the best option for those willing to fork out some cash.

For $4.95 a game, fans can watch the Vikings take on the Big Sky live on www.bigskytv.org. Big Sky TV also offers season and team packages ranging from $40 to $100.

“Big Sky TV is in its second year and provides a great way for fans to see their teams on the road,” Chisholm said.

Sophomore forward Alex Tiefenthaler was “hotter than a cheap pistol” Sunday, an announcer on Altitude Sports said during the broadcast of Portland State’s matchup against Idaho State (5-11, 2-1 BSC).

Tiefenthaler and the Vikings (10-8, 3-2 BSC) pounded the Idaho State Bengals 71-61 in the Big Sky Game of the Week, televised on Altitude Sports and Comcast SportsNet in the Portland area.

Portland State struggled early but found their medicine in the second half, executing a seemingly indefensible inside-out game, where the ball was thrown inside the paint and then kicked out to a shooter along the perimeter.

Senior center Scott Morrison had his best game of the season, scoring 16 points and grabbing 10 rebounds. Morrison did most of his work at the line, hitting eight of 11 free throws. Senior guard Deonte Huff led the Vikings with 17 points, but it was Tiefenthaler who stole the show. The lanky transfer came off the bench for 16 points in 24 minutes, busting the Bengals’ zone with five three-point field goals. 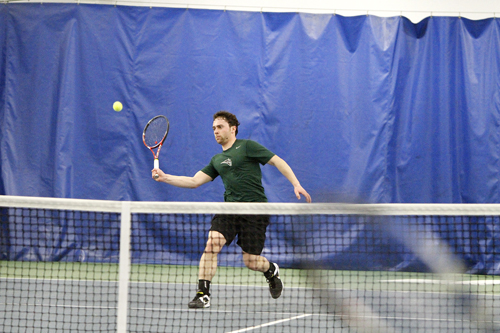 Shot down by the Pilots